As clear, thorough and complete as this Press Conference was, don’t expect the Democrats to accept any of this.

“Thanks to the Special Council’s thorough investigation, we now know that the Russian operatives who perpetrated these schemes did not have the cooperation of President Trump or the Trump campaign. Or the knowing assistance of any other American for that matter.”

That is something we should be all grateful for. But the Democrats will not share that gratitude.

"As he said from the beginning, there was in fact no collusion." pic.twitter.com/EPBKQyNEoJ

Mueller found some attempts by Russian operatives to influence American elections by way of disinformation, but…

“the Special Council found no evidence that any American including anyone associated with the Trump campaign conspired or coordinated with the Russian Government or the IRA in this illegal scheme.” “No Collusion.”

“The Special Counsel found NO evidence that ANY American—including anyone associated with the Trump campaign—conspired or coordinated with the Russian government or the IRA in this illegal scheme." pic.twitter.com/ftbLgbuJsp

Regarding GRU, and Hillary’s emails:

“The Special Counsel’s report did not find any evidence that members of the Trump campaign or anyone associated with the campaign conspired or coordinated with the Russian government in these hacking operations" — Attorney General William Barr pic.twitter.com/7s6TDDEcAN

IE: No evidence of collusion.

GRU was involved in DNC hacks by way of Guccifer. They dumped that info by way of Wikileaks.

“In assessing the President’s actions discussed in the report, it is important to bear in mind the context. President Trump faced an unprecedented situation. As he entered into office and sought to perform his responsibilities as President, federal agents and prosecutors were scrutinizing his conduct before and after taking office and the conduct of some of his associates. At the same time, there was relentless speculation in the News Media about the President’s personal culpability, yet, as he said from the beginning, there was, in fact, no collusion.

And as the Special Council’s report acknowledges, there is substantial evidence to show that the President was frustrated and angered by his sincere belief that the investigation was undermining his Presidency, propelled by his political opponents, and fuelled by illegal leaks. Nonetheless, the White House fully cooperated with the Special Council’s investigation, providing unfettered access to the campaign and White House documents, directing senior aides to testify freely, and asserting no privilege claims.

And at the same time, the President took no act that in fact deprived the Special Council of the documents and witnesses necessary to complete his investigation. Apart from whether the acts were obstructive, this evidence of noncorrupt motives weighs heavily against any allegation that the President had a corrupt intent to obstruct the investigation.

Four kinds of redactions in the report:

With respect to what the Democrats have been loudly complaining as an ‘unfair’ opportunity for the President to review this document before Congress does, allowing an opportunity to rebut the contents, the AG explained:

The Ethics in Government Act permits individuals named in a report prepared by an Independent Council the opportunity to read the report before publication. The President’s personal lawyers were not permitted to make, and did not request any redactions.

With Respect to the Congressional Oversight objections:

REKT INTO THE SUN ?

REPORTER: Are you trying to protect the president?

BARR: I told you what is in the report, what's wrong with that?

R: You face an unprecedented situation

BARR: Is there another precedent for it?

BARR: Unprecedented is an accurate description then pic.twitter.com/4O8XSDzdg9

So has his legal team:

"The results of the investigation are a total victory for the President….”

The spin by the #PartisanPress has already started: 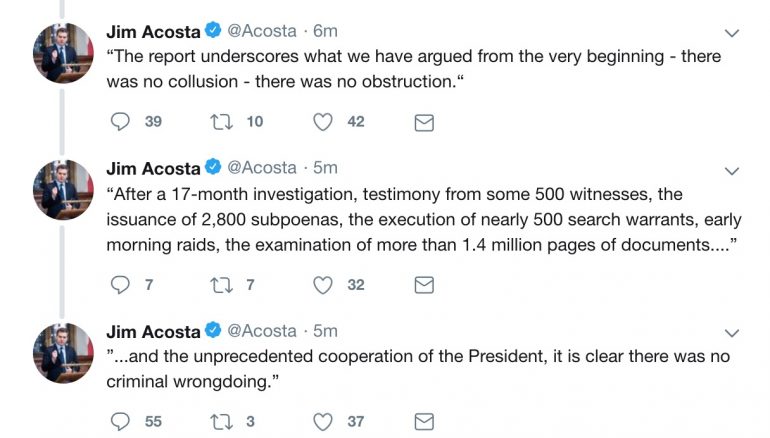 "That was extraordinary."@MSNBC's Brian Williams Reacts To Barr presser.

"Bill Barr has decided … he's fine with his legacy being the AG who took one for the team."@niWallace "It's like parent saying, yeah, my kid vandalized the school but he was frustrated…" pic.twitter.com/tTjXgnRDrc