It looks like Alexandria Ocasio-Cortez(D-NY) is about as good at writing fiction as she is at crafting resolutions and FAQs.

But then again, with AOC, it’s all fiction. So… there’s that.

Rep. Ocasio-Cortez giddily posted the seven-and-a-half minute video that was published on The Intercept and you could almost hear the “squee!” as she fangirled over herself.

She’s not just excited that it’s all about her and her “Green New Deal” resolution that fell with a resounding “splat” in the Senate, it’s also because she wrote and narrated it. Yes, kiddies, she can now add screenwriter to her vast list of accomplishments.

How bad is the video?

Well, she goes through 40 years of climate science; blames “Big Oil” for not taking the threat of global warming/cooling/warming seriously; shows how wonderful the economy is; makes stereotypical remarks about Native Americans; says that the problems that America faced post-2020 was that there was a dearth of workers, and laments that half of Miami is permanently underwater because of a hurricane. But, fighting the flooding, fires, and droughts only made everyone grateful that action was taken — well, presumably that excludes the residents of Miami. Also on the plus side, a young girl of color that admired AOC has just completed her life journey from mangrove planter to solar plant engineer to childcare worker to winning AOC’s old House seat.

One of the most perplexing parts is… why does future AOC look like Rogue from the X-men?

Yeeeaahhh… I’m not so sure.

Is it because Rogue sucks the power and life out of anything she touches and it becomes a part of her?

Ok, my bad. We’re supposed to take this super seriously, you guys.

Just like the way Jeanne Moos of CNN takes the freshman Congresswoman’s Instagram Live videos. I mean, how could you not? AOC is apparently able to assemble IKEA furniture and talk to her followers all while chewing!

While AOC has managed to moderate her grating voice, eliminated the “likes” as filler, and desisted with her usual uptalk, it’s still a painful watch. That’s because the content itself was utterly ridiculous.

At the beginning of the video, an older AOC is traveling by bullet train from New York to D. C. and reminiscing on how she has made the world a better place. An artist paints the images that AOC evokes as she narrates the video. The year is 2028-ish, and AOC is somehow involved in government, but it’s not as the Representative of New York’s 14th Congressional District. (Does she think she’s a Senator at this point? Ha! She’s probably got her eye on a higher prize — The White House.) She’s older, clearly not wiser, and gives a history of climate change science beginning in the 1970s. Spoiler alert: “Big Oil” has known that the world is going to end and didn’t bother to tell anyone so that they could profit from the destruction of the earth.

…which ushered in a decade of “Green New Deal” prosperity which included the restructuring of the economy along with these two images: 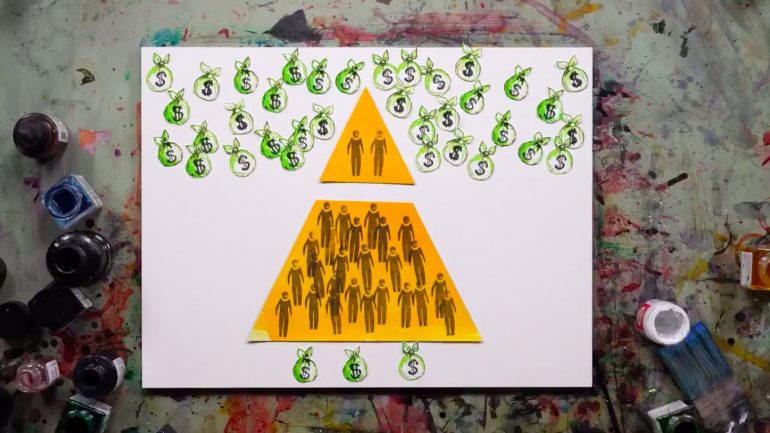 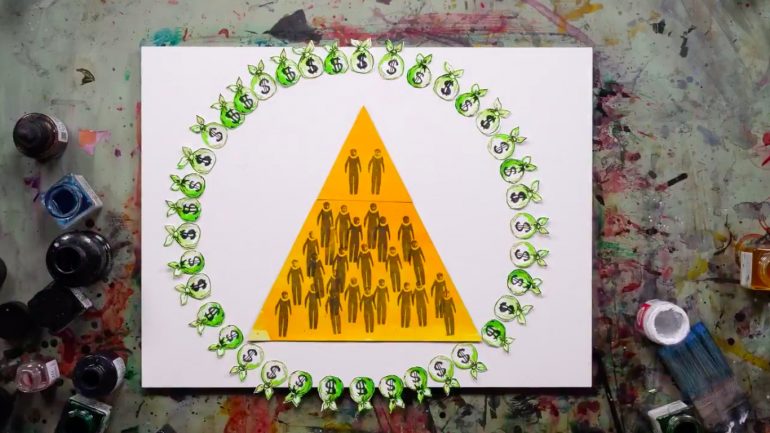 Is this pyramid with the money bags around an allusion to socialism?

She then says that the nay-sayers that said it was too hard to restructure our entire modern civilization in just 12 years didn’t have the vision to see that this was like our World War II.

Ugh. That’s not a thing.

She mentions the lack of workers as every building is retrofitted to fit with the new “green” vision, but never mentions nuclear power. The entire thing is a socialist dream — or rather, a dystopian nightmare. It seems that Big Government runs everything.

Watch as AOC takes a bullet train to the future and reflects on the Green New Deal Revolution:

Climate change is here + we’ve got a deadline: 12 years left to cut emissions in half.

A #GreenNewDeal is our plan for a world and a future worth fighting for.

How did we get here?
What is at stake?
And where are we going?

The short summary is — if you don’t like the Green New Deal’s “recalibration” of our economy into a socialist utopia with Alexandria Ocasio-Cortez as a “thought leader,” you’re siding with evil oil companies and corrupt politicians.

This video shows just how vapid and unserious this freshman Congresswoman really is, and frankly, it’s embarrassing.

Maybe when she runs for reelection, a glass of water will primary her and she’ll lose.