Since the Democrats and their PartisanPress defenders see ‘incitement to violence’ in the barest criticism of public statements by elected officials, what should we say about April Ryan?

Remember, for all the hype and bluster the Left whips up about how ‘badly treated’ they are, the actual incidents of intimidation, doxxing, coordinated attempts at censorship and even incidents of violence are heavily skewed against the political right.

April Ryan, one of CNN’s White House reporters was really upset at Sarah Huckabee Sanders. She said that Sanders needed to be fired for lying, but she used some rather colorful language.

“Not only does she not have credibility, she lied. She out and out lied,” she declared as emotion welled up in her voice. “And the people, the American people can’t trust her. They can’t trust what’s said from the President’s mouthpiece-spokesperson from the people’s house. Therefore, she should be let go. She should be fired, end of story.”

Things got very dark as Ryan rhetorically suggested that since there was “a lack of credibility there, you have to start and start lopping the heads off.” She added: “It’s fire me Thursday or fire me Good Friday. She needs to go.”
Source: NewsBusters

"Not only does she not have credibility, she lied. She out and out lied…the American people can’t trust her," says @AprilDRyan of Press Sec. Sarah Sanders.
"She should be let go. She should be fired, end of story…it’s fire me Thursday or fire me Good Friday. She needs to go." pic.twitter.com/M0whZiHg1l

Does anyone remember any similar rants about Susan Rice?

Then on top of that, she says the press is fake when she’s faking reports from the people’s house. She’s calling us fake. We’ve had colleagues who have had to move from their houses because of threats. I have to have security because of being called fake and a loser and all sorts of things from that White House.
Source: NewsBusters

That’s a worthy challenger for a record-setting lack of self-awareness.

Mike Huckabee was, understandably, protective of his daughter. Especially after some of the targeted mischief she and others have personally been subject to. He called April Ryan out for her statement. 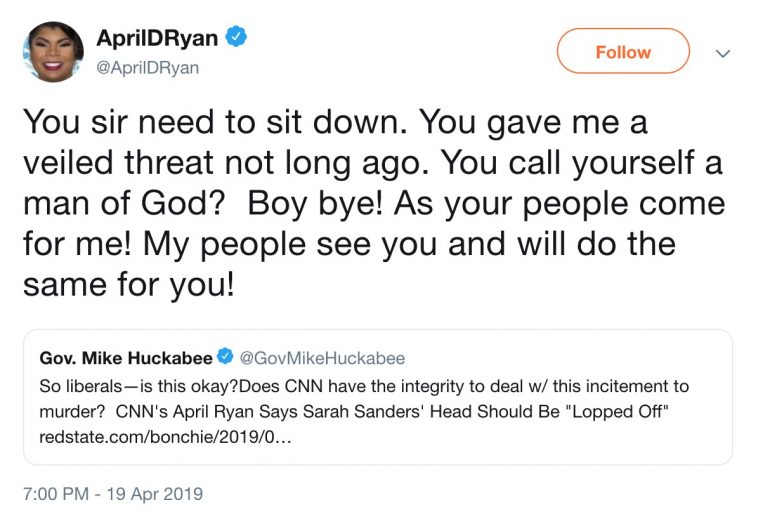 Head should be lopped off? If we stretch it and maybe give her the benefit of the doubt, she’s ‘merely’ an incompetent attempting to invoke the phrase ‘heads will roll’ and failing spectacularly.

But even that excuse is offset by the fact that she is couching her own kvetching in a ‘speech is violence’ complaint.

Look how hard we have it because the network that got busted again and again for floating bogus stories that just ‘happened’ to be hypercritical of the President is called ‘fake’.

In case you were wondering, April, that is precisely what we mean by fake news. When you look past ten praiseworthy things he has done as President just to find some dumb story about two scoops of ice cream on his pie, you forfeit any right to be taken seriously.

When your network turned Avenatti, hyped as the great white hope of knocking off Trump, into a celebrity — only to see him crash and burn so spectacularly, you collectively forfeit the right to be taken seriously.

Not everything Trump does is good, true. But — and this may shock you — not everything he does is BAD, either.

Here is the flip side of your complaint. You complain that you ‘need security’ for being called fake.

Look at Tucker Carlson in his home. Look at Sarah Huckabee in a restaurant with her family. Look at the Covington kids, or countless MAGA hat wearers minding their own damn business. Or the Punch-a-Nazi movement combined with folks on CNN and MSDNC calling almost everyone who didn’t vote Hillary a Nazi.

Look at Conservatives on campus being sucker-punched, sprayed with noxious chemicals, chased out by rioters.

Look at Social Justice Warriors at Evergreen College — attacking a Liberal professor who didn’t bow the knee to their jackboot tactics.

You really should know better than to throw around terms like ‘lopping heads off’ when you are the very same people who tell us that poor benighted Ilhan Omar is being ‘endangered’ by the right.

You can’t have it both ways.

Oh, and as for that ‘snappy’ comeback and the ‘veiled threat’? How about a little context for our fake News anchor’s dishonest dig at a man of faith [a card she would never even dream of playing against a Muslim or Sikh, which fits nicely with her network’s trend of anti-Christian bias], here’s the background:

Maybe you remember ‘Piegate’ — the twitter tempest-in-a-teapot about whether or not Sarah did, in fact, bake a Pecan pie herself. She had the last laugh by baking four pecan pies and documenting the process with photos step-by-step.

Huckabee goaded her over it:

“Stuart, don’t ever and I mean don’t ever mess with a Southern woman and her homemade pies,” he told Fox Business host Stuart Varney. “It is as dangerous as when you hear a Southern woman begin her sentence with ‘bless your heart.’ It means you’re about to be gutted like a deer, you just don’t know it.”
Source: FoxNews

Did April really fear that Sarah was going to come at her with a cleaver and cut that pie right out of her belly?

Or is she lying and trying to play the victim… yet again?

That card is old and tired. How about you retire it and conduct yourself as though you were a professional — if you can.

And if she says she saw that as a ‘veiled threat’, how are we supposed to interpret her reply?

‘As your people come for me! My people see you and will do the same for you!’

You sir need to sit down. You gave me a veiled threat not long ago. You call yourself a man of God? Boy bye! As your people come for me! My people see you and will do the same for you! https://t.co/M72QQACjqV

‘His’ people are coming for her? Who exactly?

And she is threatening to retaliate? Here’s the problem. Her statement points out her own lie.

Either she was NOT making a threat against him (in which case she needs to give him the same benefit of the doubt she claims that she’s not getting here) or she has misunderstood something as a threat and really is making some sort of a malicious threat against someone who never made one. (It needn’t be violence, either. Their attack machines on Silicon Valley and Media Matters have all sorts of ways to hurt someone short of actually swinging a bike lock at their head.)

But since we’re speaking about Liberals, the last two years have proven that beat political rivals with bike locks is never an option you can completely rule out, either.

By the way, Sarah Sanders spoke about the beheading comment on Fox & Friends this morning (beginning at the 3:26 mark):

It’s kind of sad that Sarah Sanders considers this par for the course when you work for President Trump. But she’s determined to take the high road and she should be admired for it.