So, they’re just fine with vulgarity when Obama and Anderson Cooper mock Tea Party activists on CNN, but God help Trump if he retweets something a little ‘blue’. “Circle Jerk” is a bridge too far.

Once again they are doubling down on the double standards.

Great job, Liberal Left — keep showing the world what kind of hypocrites you really are. That’s exactly what we want to see for 2020.

You don’t even blink when you see your side demonize and Doxx children in MAGA hats, but let Trump retweet an insult against the dishonest PartisanPress of the Media(d) and you get bent way out of shape.

Alright. What did the ‘bad Orange Man‘ do to make the children cry this time?

This is why nobody but the @DNC circle jerk takes this seriously anymore. That front page is a disgrace but in its disgrace, many wake up. Thank God for @realDonaldTrump for waking millions of Americans up to the truth about the @washingtonpost

With all the Crowing our President has been doing about the Mueller Report findings, especially the non-involvement of any Americans in conspiring with Russia, what do you think his key takeaway was with this tweet?

Was it (A): That the dishonest Media(D) was desperately looking for a way to keep framing Trump as ‘Orange Man Bad’ instead of reporting the news as it happened?

Or (B): calling the media a sexually-charged BadName? 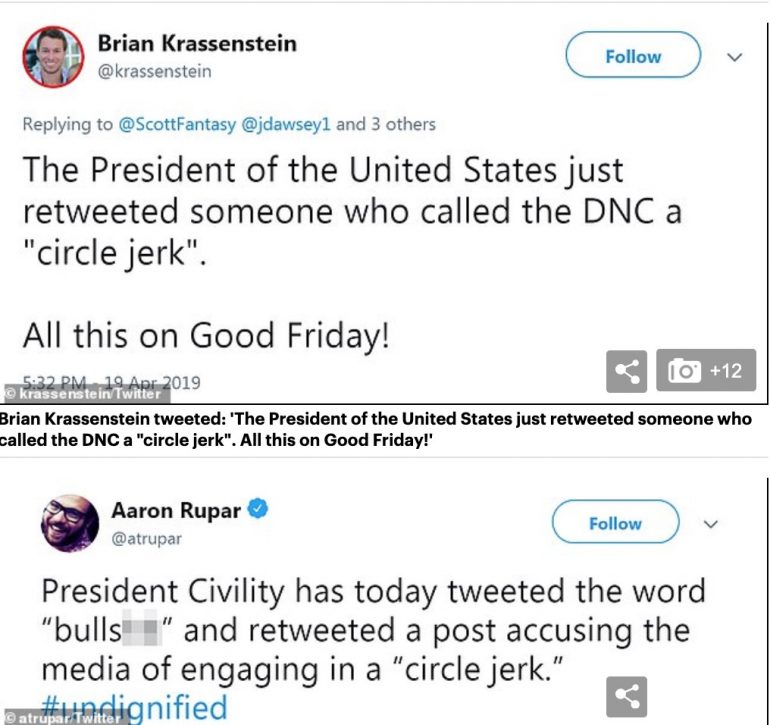 Honestly, knowing what I know about the Krassenstein trolls, it’s more surprising to hear he even knows it’s Good Friday. Unless he happened to see somebody tweet about it.

Well, for one thing, taking the Lord’s name in vain is the kind of speech that the devout (Jew and Christian alike) are particularly warned against. References to sexual acts, bodily fluids and bathroom humor are not as cut-and-dried. It’s impolite, sure… but sinful per se? That’s more of a stretch. It takes a particular interpretation of particular verses to get there.

But those tweets… and from someone in high office!

The Fake News Media is doing everything possible to stir up and anger the pols and as many people as possible seldom mentioning the fact that the Mueller Report had as its principle conclusion the fact that there was NO COLLUSION WITH RUSSIA. The Russia Hoax is dead!

See a pattern forming? No?

Ok. How about now?

So even supposing there WERE no evidence that this was an “I’m right and all my most aggressive and loudmouthed opponents have been proven wrong bout of crowing”, and we wanted to say he was calling the people at WaPo a BadWord, then what? What does that say bout him being a President? Is it a big deal or not?

For context, let’s see some other things he’s said.

In any event, it may well be too late to purge “teabagger” from our discourse, certainly from discourse controlled by liberals. But I’m for giving it a try: for running “teabagger” out of town, even at this late date. It is really a lowdown term. “Tea partier” is a neutral term. “Tea-party patriots” is a positive term, used by some of the protesters themselves. “Teabagger” — not so positive, and not so neutral.

I.e. it’s a smear, but let’s let Barack Obama off the hook for using it because he’s “trying to do good” or whatever.
-Source: HotAir

Wait — that’s not Trump at all, is it? It’s that other guy before him saying something a lot more cynical and demeaning about Joe Public.

Curiously, the videos of Obama and Anderson Cooper yukking it up with the word TeaBagger — the one that used to be a dime a dozen — has suddenly made itself scarce.

Does Google charge extra for this kind of image consultant services for Obama and his lapdog press or is that just them performing the kind of ‘services rendered’ that starry-eyed groupies have always tended to offer their betters… in hopes of getting some token of affection from the cool kids?

The Media(D) carried Obama’s water, and worse, when he did it (and again when he weaponized the IRS against US citizens from that same group).

Is it ‘unpresidential’ to retweet that tweet critical of a ‘free press’ who not only misled America for two years and change over the supposedly criminal nature of their president… but — in the fact of facts showing the central allegation about Russia to be demonstrably and conclusively untrue — they ignore that and go sifting through to grasp any little straw they might find to make their case that Trump really is the monster they’ve been trying to transform him into since the day he came down that escalator with an R after his name.

Before that day, they all thought he was just peachy. Just another celebrity.

But now that he’s joined the team they are sworn to defeat and destroy — now they need us to believe he’s Godzilla personified and must be stopped at any cost. Even if they are trying to perpetuate a discredited myth.

How dare Trump hit back at those who have slandered him! Just who does he think he is?