Because calling us a ‘basket of deplorables’ worked out so very well in 2016, they’ve gone ahead with another one.

Do they not yet realize this makes them look like pompous elitists looking down from their ivory towers at the ‘great unwashed’? This line has been said so many times it’s becoming cliche, but it still rings true:

That is why we are happy to see them keep stepping on these rakes again and again.

… the Governor of Washington State and yet another Democratic Presidential hopeful.

By the look of this clip, he has a personal goal of making Joe Biden look like a Mensa Card holder. Watch:

Why anyone would willingly suffer through seven hours of this tedium is beyond imagining. But somebody thought it was a good idea. We’ve skipped ahead to the relevant part. (You’re welcome.)

This guy who runs a State with a Sanctuary Cities problem gives automatic voter registration to everyone with a driver’s license.

That isn’t the noteworthy part but it does lead into it.

I’ll tell why I believe this. Look as long as, uh, some local official in a sorta non-enlightened area doesn’t understand why implicit bias is a bad thing — we do in my state, in fact I have my cabinet members take training in implicit bias because we believe in diversity in my state but some of those places they don’t quite get it and if they’re in charge where the voting machines go, you know where those voting machines are going to go. They’re not going to go in the black neighborhoods. We gotta make sure everybody can vote we need a federal law to allow the mail-in ballot.

Does he even hear himself?

Not three seconds after talking about ‘implicit bias’ he starts — unironically — spouting off about how unenlightened he thinks people who don’t share his political dogma really are.

He assumes that having any contrary opinion to his own crackpot notions is proof positive of racism and not just racism generally … but racism against people who live in black neighborhoods.

It never occurs to him to wonder whether he’s got a stupid strawman view (or, if you prefer, ‘implicit bias’) against people who disagree his personal politics.

He’s obviously never seen the video where a guy with a camera interviewed people he met on the street, asking black men and women whether they had any difficulty getting ID, and they reacted as though that was the most ridiculous thing anyone had ever asked them.

I had no idea that Nelson Mandela was so opposed to black people having a vote: 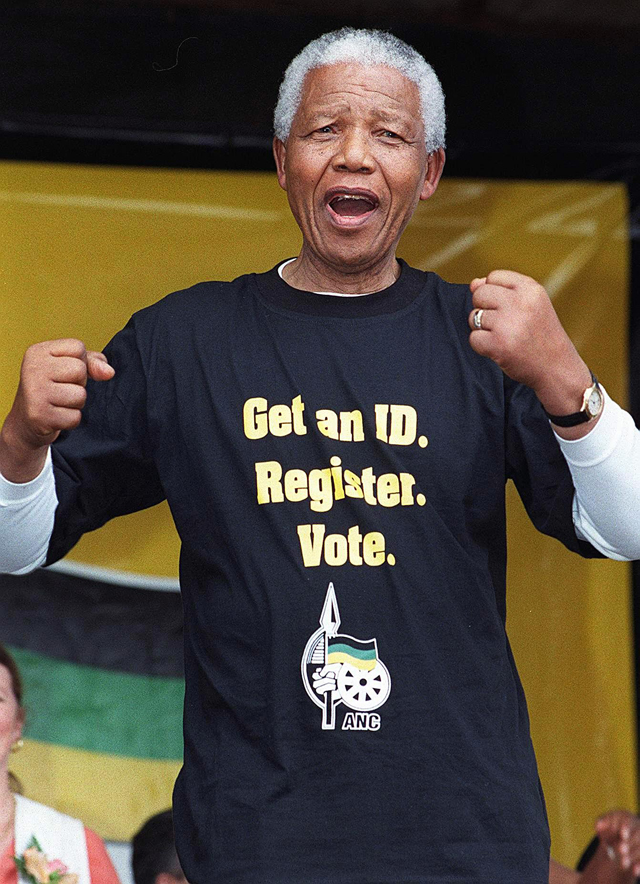 Is there some OTHER reason why people might object to his idea?

Do we really want Washington DC micromanaging what any of the 50 states do with themselves in areas outside of the lines already drawn in the Constitution?

The States weren’t even interested in cooperating with a Federal investigation into voting irregularities including people voting in two different States, for example — not even after all the hoopla over Russian interference and the integrity of our voting system.

When it suits them, the Left even remembers their commitment to Federalism. For example, now that Kavanaugh has been nominated, the Abortion lobby is suddenly pushing Vermont, New York and probably other places to invoke State laws so that a (politically) unfavorable SCOTUS decision won’t leave them hanging.

While the Left is notorious in their resistance to having the voter rolls cleaned up (partly because it makes malfeasance easy to spot) some of the policies he has suggested are very easily exploited by those more interested in gaining or keeping political power than they are in each lawful citizen getting their full voice heard in the political process.

Non-participation is just as legitimate a political message that a citizen can send as participation. And if someone who has no interest in voting — whatever the reason — is added to the rolls without his choice, it gives room for an illegitimate ballot to be slipped in unnoticed.

That’s why people like Judicial Watch work so hard to get the voter roles purged of people who have died or left the voting district.

Judicial Watch signed a settlement agreement with the State of California & with the County of Los Angeles under which they will begin the process of removing from voter registration rolls up to 1.5 million inactive registered names that might be invalid.https://t.co/oqaSiTI5ZA

There is, after all, the ‘small matter’ of disenfranchisement and abuse. ‘One person one vote’ only truly works when there is a real limit to one vote for any willing authorized voter. In an instance of election fraud (*cough* Broward County *cough*) then each ballot wrongfully added to the total silences the democratic voice of one legitimate voter.

In closer races, this could even swing an election… and thwart the real will of the people in the process.

Not that we’d expect the power-mad #Resist crowd to be very concerned with such ‘trivialities’.