Did you get the message about politics being as important for your football draft pick as his stats? No? Neither did the 49ers.

Maybe that’s because they’re more interested in finding players that can get them to the Superbowl than they are about appeasing the ‘Woke’ crowd on EPSN.

So they drafted… Nick Bosa.

Who is Nic Bosa? That depends on who you ask. He is EITHER …

A political nonconformist who has said some offensive things, like that he doesn’t like Beyonce, that Colin Kaepernick is a clown, and (perhaps worst of all) he put this on his social media feed: 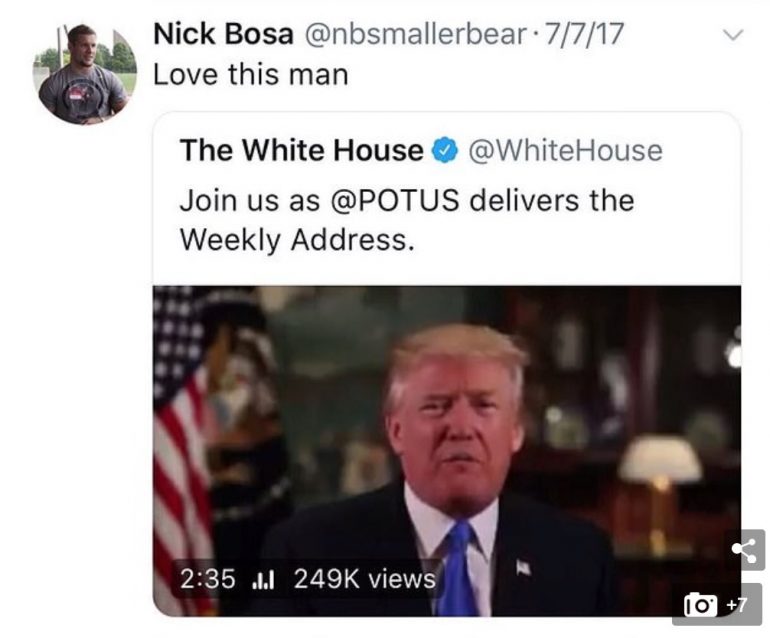 Will ‘woke’ fans rise up and defend his ‘exercise of free speech’?

That honor is reserved for players who politicize game day and spit in the eye of the fans in the stands while wearing the team uniform.

Here comes the race-baiting, of which this was but one example:

As for Bosa, he has attempted to explain his—now scrubbed—social media habits away, saying, “I love the Bay Area, and I’m excited to play there. I was a little insensitive in some of the things I said (on social media). I’ve learned a lot in the past few months. And I’m just ready to move forward in that, put it in the past and bring the Faithful some wins.”

The obvious double standards at play here are outrageous. ESPN’s resident draft expert Todd McShay said before the draft that “I don’t think it’s going to affect his draft stock. I can’t imagine—and I’ve talked to some teams—a team saying we’re gonna pass on this guy because he’s left or right wing.”

This is willful political blindness. The evidence shows that a black player who expresses anti-racist ideals will find themselves blackballed from the league, like Colin Kaepernick, or harassed and drug tested repeatedly, like Eric Reid. White players, like quarterback Josh Rosen, who have expressed anti-Trump views find their draft stock diminished and their character called into question. But being not only pro-Trump but also expressing affection for the ugliest parts of Trump’s white nationalist base is a non-issue. In Bosa’s place, it may have even been seen as a plus in the eyes of Republican General Manager John Lynch. Either way it certainly wasn’t viewed as a deficit.
Source: Dave Zirin, The Nation

If Dave really thinks this is a white player / black player thing, he’ll need to explain why a white-majority nation watches basketball, where the majority of players are black. And that’s hardly the only sport where non-white athletes do as well as or even better than their white counterparts.

There was plenty more where that came from (notice the Blue Verified Checkmarks): 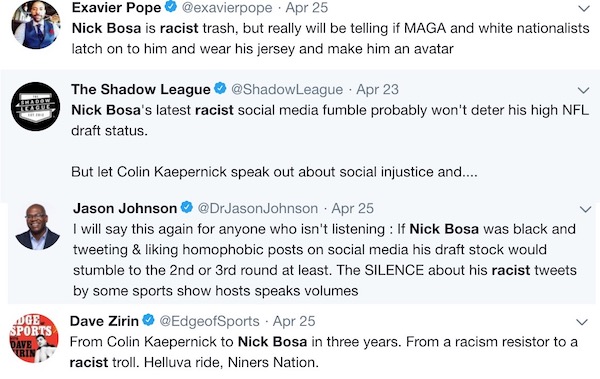 The ‘racism’ must have been pretty bad, for them to be piling on, eh? You think so? Does it take much for them to call the rest of us ‘racist’? Judge his ‘racist’ remarks for yourself.

Here is the New York Time’s summary of Nick Bosa’s horribly offensive and racist social media activity. Not sure I see the offensive or racist part. pic.twitter.com/QDz8sWeeeq

If you dare to think independently, support different causes, favor different political ideas or even *gasp* enjoy different music and movies, you are ‘obviously racist’.

For some, everything has to be seen through a racist lens. And for some, the only team that really matters is if you cheer for the big-government nanny state as loudly as the do.

He hasn’t even worn the jersey on a game day yet — it is literally impossible for him to have exploited it to inject divisive politics into an athletic event. But that doesn’t stop the ‘purists’ from demanding their pound of flesh.

Maybe this has something to do with why he liked Trump in the first place: