When AOC spoke at Al Sharpton’s Conference, the Internet laughed at her Hillary-like ‘voice change’.

When she got called out for it, she played the victim card — yet again.

So which is it, Alexandria? Are you ‘da boss’, the ‘future’ and a strong, independent woman that has the Right quivering in our boots? Or are you a perpetual victim, terribly abused and oppressed by the big, bad Right-wing conspiracy? 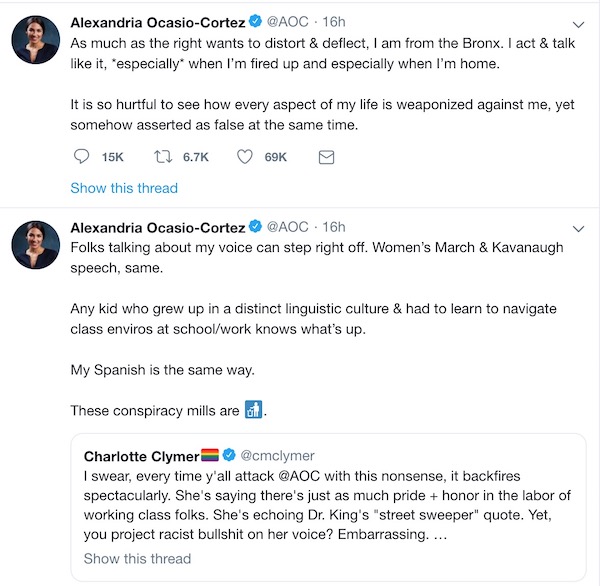 The internet isn’t buying her excuses:

She’s drawing out syllables at the end of her speech here too.

Don’t you even try it.

Where was that “Bronx” accent when you were on 60 minutes talking to @andersoncooper like you were a six year old little girl? Your Christine Blasey Ford “accent” is my personal favorite.

STOP PANDERING TO BLACKS, @AOC!
WE SPEAK ENGLISH TOO. https://t.co/WYJED6zZzV

Ocasio-Cortez speaks in an accent that she never uses while telling a room of predominately black people that there is nothing wrong with them folding clothes, cooking, and driving other people around on a bus for a living. pic.twitter.com/FIbIAPokt0

Who has the worst, pandering fake Southern accent?

(I've made a little video for you to be the judge) pic.twitter.com/aEihBjLhTO

She trying too hard. The accent is so obvious????

Every African-American does not talk in this way. I guess you're trying to "win the black vote."

This is the end for me. How dare @AOC get up there and disrespect the intelligence and integrity of black folks like that

I literally could not watch this all the way through the first 5 attempts.

These Democrats are pimping out black neighborhood in plane view!!

But there was more to the event than just unveiling this accent, demonstrating to a conference founded by a race-hustler that she’s just as ‘intersectional’ as anyone else in the room.

There were expert panel discussions talking about the issues of the day.

Issues like how AOC has personally helped cheat thousands and thousands of minority voters out of jobs that would have been directly or indirectly created by the major project by Amazon that she so proudly helped chase out of New York.

Rep. Alexandria Ocasio-Cortez was ripped as “financially illiterate” Friday for her role in killing the Amazon deal at the same Midtown conference where she was a featured speaker a couple of hours earlier.

“The people campaigning against the Amazon campus are financially illiterate,” Tracy Maitland, president and chief investment officer of Advent Capital Management, said during a panel discussion at the National Action Network conference in Midtown.

…Afterwards Maitland told The Post, “This was a disgrace. I partially blame AOC for the loss of Amazon. She doesn’t know what she doesn’t know. That’s scary. We have to make sure she’s better educated or vote her out of office.”

…Another panelist, CUNY chairman Bill Thompson, said that job opportunities were “snatched away” from the predominately black and Latino students of the City University.

“We were at the table talking to Amazon on how students could get jobs … those opportunities were snatched away,” said Thompson, the former city comptroller.

“Those students look like us … We’re talking thousands of high-paying jobs. It was a disappointment from a CUNY perspective.”
Source: NYPost

When people at a Sharpton conference are calling the left’s new darling ‘dangerously ignorant’ who should get her head on straight or be voted out of office, the ‘Vast Right Wing Conspiracy’ is the least of her worries.