In society’s sprint towards full acceptance and inclusion of transgender individuals, many medical practitioners have opted to jump on the “gender affirmation” mode of care including for children and young adults.

There are some experts like Dr. Debra Soh, who holds a Ph.D. in sexual neuroscience, who suggests that we pump the brakes on this type of treatment for young people. Back in 2018, Dr. Soh wrote that not all cases of gender dysphoria are the same and shouldn’t be treated the same way.

In a list of today’s top-10 contentious issues, the subject of transgender children easily covets the No. 1 spot. Parents, teachers, and medical professionals have been told that “affirming” a child who identifies as the opposite sex is the only acceptable approach. Anything short of that is transphobic and will lead a child to suicide.

But it’s not as simple as what we’ve been led to believe. There are a number of reasons why children may want to transition and, in many cases, they don’t have anything to do with feelings of being “born in the wrong body.”

Her article goes on to say that some children associate with the other gender almost immediately, but if left to not transition “60 to 90 per cent desist upon reaching puberty and grow up to be gay.” The sudden incidence of teen girls and young women becoming gender dysphoric with no childhood indicators is on the rise and “typically emerges after an individual has spent much time researching gender dysphoria online.” Dr. Soh says that there are several reasons for this — often times these girls also have other mental health conditions like autism or borderline personality disorder, and sometimes it’s simply because they are “sexually attracted to gay men, and gay men generally prefer partners with masculine bodies and corresponding genitalia.”

Children presenting with gender dysphoria, whatever the reason, deserve to be treated with love and compassion. This includes adolescents for whom transitioning is deemed the best way forward, should alternative approaches be ruled out.

But by taking children’s words at face value, the adults in the room are denying them the help they need. The goal of successful policy and medical treatment should be to improve the lives of those who are struggling, not to pat ourselves on the back for being open-minded and progressive.
Source: Globe and Mail

“Gender affirmative hormone therapy” should be approached with extreme caution because it causes sterility along with the possibility of a whole host of other medical problems affecting cardiovascular health, bone density (osteoporosis), and even cancer.

But, let’s just ignore that and keep moving forward. Let’s go right on ahead and push the age that we treat gender dysphoria with hormones younger and younger. Oh, and if you’re a parent, courts may block you from stopping the medical “experts” from sterilizing your child because of the way they feel right at this moment.

Planned Parenthood has expanded its “care” to include “gender affirming hormone therapy” in their clinics. To be clear, they do not currently provide this type of treatment to minors. According to the Planned Parenthood Central and Western New York website, nationally, they are the “second largest provider of gender affirming hormone care.” This is despite the fact that not all PP centers are currently offering the treatment.

This is from the Planned Parenthood Greater Texas website: (which seems to be consistent with other PP websites that offer the hormone therapy.) 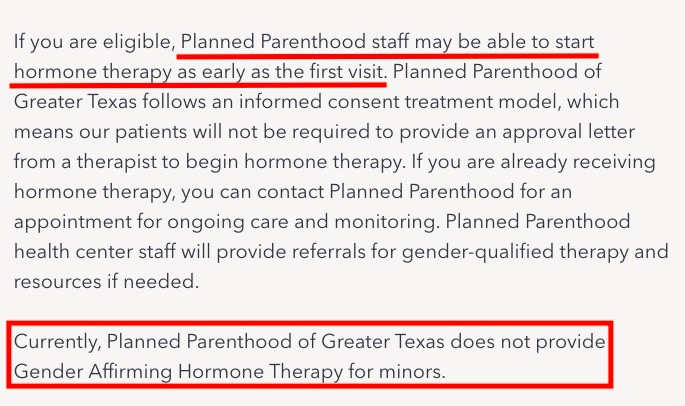 So, you can start your sterilization journey at Planned Parenthood from the very first visit!

They do say that you have to be 18 and able to give “informed consent.” 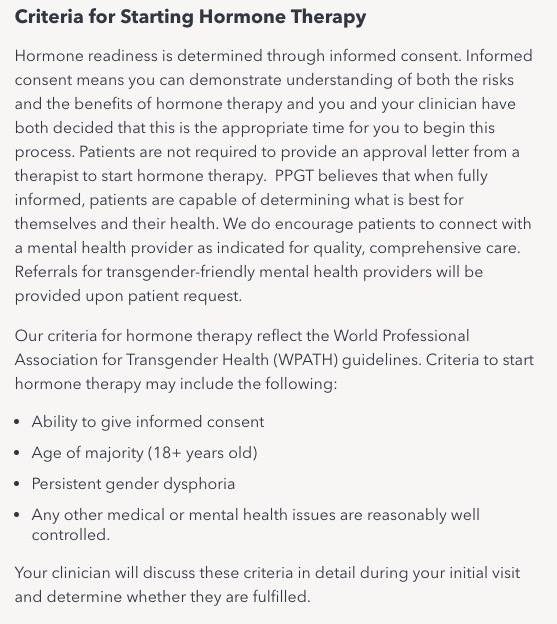 Informed consent? Really? They can determine that on the first visit?

But if you look at another procedure that Planned Parenthood provides for sterilization — tubal ligation — it’s a very different set of requirements. There are age restrictions with the minimum ranging between 18 and 21 depending on the state, and waiting periods. Some of this is mandated by the state but some of the caution is due to the likelihood of regret. 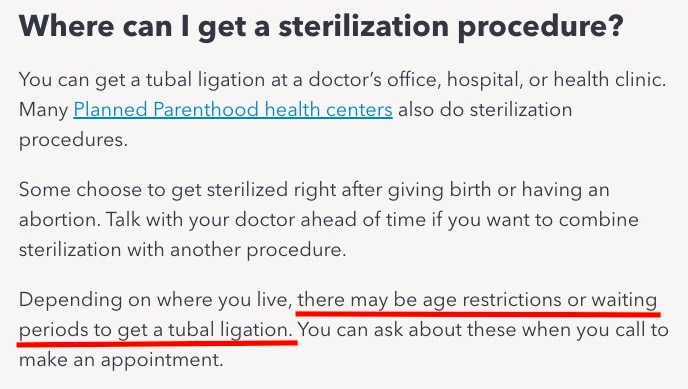 In addition, some medical professionals refuse to perform tubal ligations on women under the age of 25 due to the high incidence of regret.

You may not have the inherent maturity to understand the seriousness of the decision, and while you may disagree with that perspective now it may become apparent once you move towards your 30s and beyond.

You should also be aware that many physicians will actually refuse to perform tubal ligation surgery on a woman who is younger than the ages of 25 to 30 based on the frequency with which these regrets occur. (Reported to be as high as 25% for women under 30) That these physicians exercise their right to refuse the surgery based on their ethics and principles in these situations is also an indication of just how BIG a decision this is for a young woman.

A 2008 report on sterilization in the United States in Obstetrics and Gynecology stated:

So, basically, you can become sterilized with hormones at the age of 18 beginning at your very first visit in order to conform to your gender identity, (even if that process began by court order and without parental consent,) but if you’re a woman that’s 25 — who can vote, buy alcohol, and serve in the military — and you want to get your tubes tied, you might have to wait and possibly be denied treatment.

The reason a woman might be denied the tubal ligation is due to the likelihood that she may regret it if she’s under the age of 30 and hasn’t considered the long-term implications of the decision.

But an 18-year old can choose to self-sterilize by conforming to their gender identity even though detransitioning is a thing. An article in Vox says that it’s totes kewl to let your kids transition because they can always switch back if it turned out to be “the wrong choice.” No harm, no foul, right? Oh, except for the sterility part.

Because that makes perfect sense, right?

It’s time to stand up and speak out against the sterilization of children and young adults — especially from a massive organization that receives public funding like Planned Parenthood.