Someone really didn’t think this plan through…

This one-woman protest was one of several Climate Change protests that sprang up in London.

The eco-protester was spotted by passengers on a bus lying face down with her top up to her neck. Several police officers surrounded the woman and put up screens to stop the public watching her one-woman protest. It was quite possibly the most spectacular stunt yet as climate change activists targeted London’s financial districts to highlight what they call the business world’s ‘role in our collective suicide’.
Source: Metro

She was protesting outside of Goldman Sachs. 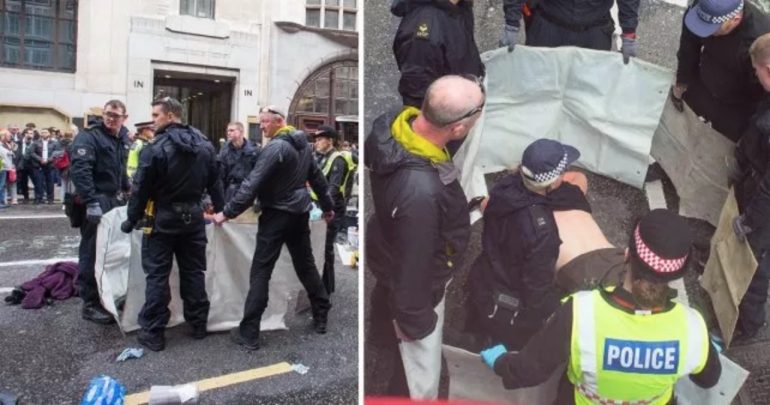 Others were targeting their stock exchange.

Altogether, there were ten such protests.

There is some footage:

#ExtinctionRebellion protesters glue themselves together on #London's Fleet Street pic.twitter.com/jy7oqd2eu8

Climate change protestors remove from glue by police who were protesting on the street London pic.twitter.com/2HWDxdRA22

This reaction says it all.

I barely feel motivated by any political topic to stand outside with a sign let alone glue my bits to the street over something. ?

Not everyone wants to ‘unite’ themselves to the street, though, eh?

There is one thing that increasingly unites men and women. We can both agree that Liberals are losing their ever-loving minds. Now there’s a shirt that says just that.

It’s conveniently available in Both Ladies…