This derpy chick really did NOT think her plan through, did she? A ‘SexStrike’? Really?

Alyssa Milano thinks she is living in the fantasy world portrayed in the stupid ‘Handmaid’s Tale’ that paints a far more accurate picture of Iran than it does of America.

With that as your starting point, should we really expect anything that follows to be even remotely rational? Of course not.

But this is wacky even by her low standards. And she got absolutely dragged on social media over it.

Our reproductive rights are being erased.

Until women have legal control over our own bodies we just cannot risk pregnancy.

JOIN ME by not having sex until we get bodily autonomy back.

We can LOVE sex and fight for our bodily autonomy. There are lots of alternatives to cis men.

Protect your vaginas, ladies. Men in positions of power are trying to legislate them. #SexStrike pic.twitter.com/yPCXuMt286

And what in the hell do you even call this…?

Cool. Be extremely careful. If you get pregnant and miscarry, and they can’t prove you didn’t miscarry on purpose, you can get thrown in jail for a long time in Georgia. #SexStrike

It gets even worse… 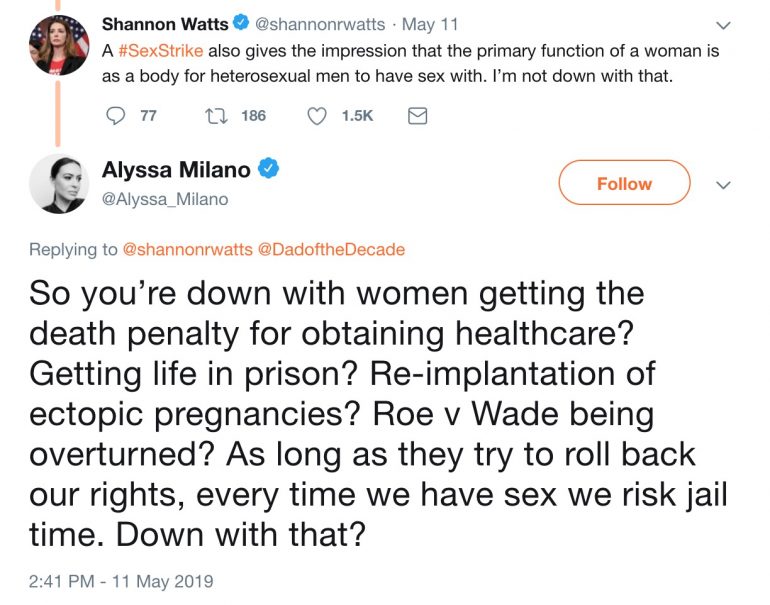 Where is she even getting these ‘ideas’? She needs to spend less time with her Twitter account and more with a competent therapist. None of what she’s talking about is happening in the real world. Nor will it. And while she’s in there, maybe she could ask about why weaponized sex is not something one usually finds in a healthy relationship.

If she actually knew someone she disagreed with — or at least took a minute to find out what they believe — she might learn that they’re not the demons Hollywood conjures up.

SexStrike was a trending hashtag, but for not for the ways she hoped it would. She managed to make herself a laughingstock — again. Even people on her team were telling her to just ‘take the L’ [loss].

me explaining to my boyfriend why we’re going on a sex strike: pic.twitter.com/AU6PYVv30C

Her other tweet on the topic used some spicy language, but it didn’t mince any words:

if the men you fuck only listen to you when you say “no sex, mister” you’ve already lost ..

But there were a lot of other jabs along the way…

This strong entry turned Milano’s ‘logic’ back on itself.

Someone tell Alyssa Milano’s husband to call me.

Hitting her with some basic facts:

The Georgia law DOES NOT include any punishment for women. Duh.

And that she just discredited her own argument…

If you have to lie to make a point, you don’t have a point.

Actually cheering her on (but not for the reasons she’d hope):

Yes!!! I’m all FOR liberal women not procreating! #SexStrike

Mocking her for actually making the other side’s case for them (even the fake VP is in on it!)…

I personally am ecstatic that @AlyssaMilano has sided with Christian Fundamentalists like myself to encourage the practice of Abstinence-Based birth control with her #SexStrike campaign. It's great to have you preaching Religious Fundamentalism, Alyssa! https://t.co/tqIWK2FqBG

Dont, worry, @AlyssaMilano’s got this, Gillibrand. She’s called all for women to engage in abstinence. Unwanted-pregnancy problem solved. ?? #SexStrike

Even the Feminists called her out:

Not everyone was subtle about it.

In other words "I'd kill to have sex as long as it's an unborn child." You're a real peach aren't you?

The Fruit Of Your Children When Following The Lord… (Videos)
May 6th, 2021 Sons of Liberty Media

Cheerleader wants to be able to curse.. Going to supreme court
May 6th, 2021 The Joe Messina Show