As usual, Ilhan Omar tried to play the race card. It boomeranged — badly.

It was hardly fair.

After all, not many people have bested Ted Cruz in a battle of wits.

And poor Ilhan Omar has so few to fight with in the first place.

Let’s go back to the beginning. Ilhan Omar is all about playing the race card. Anything done by the Republicans is never motived by principle or policy. Without fail, every policy will always be attributed to some kind of evil intent.

Racist. Sexist. Homophobe… blah blah blah. Stop me if any of this sounds the least bit familiar.

It’s the same tired game they’ve been playing for decades now. Why should it be any different under Trump?

So Ilhan Omar took issue with the idea of attaching merit to anyone coming across the border into America. How DARE we!

Omar’s tweet was so embarrassingly toxic that even she deleted it. Unfortunately for her, the Internet is Forever. It was captured before it could disappear into the digital void, along with evidence that it was deleted: 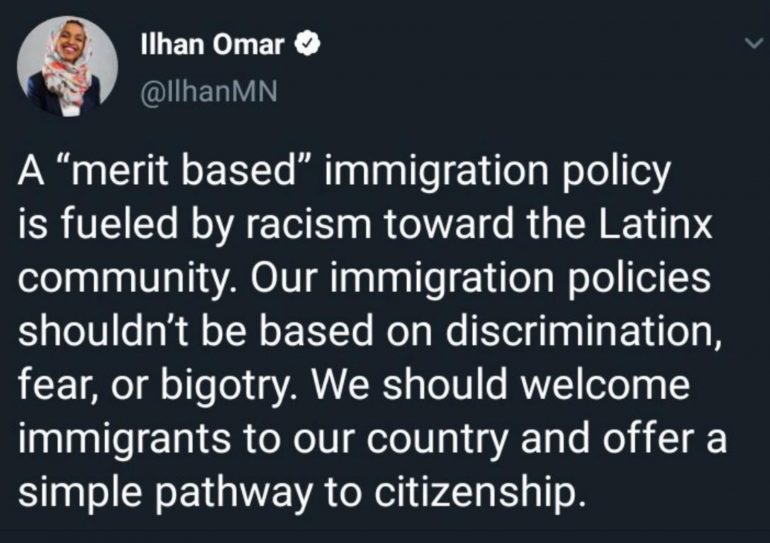 Ted Cruz had a solid reply that took her to school.

As the son of a Cuban immigrant whose Dad came to get a math degree & become a computer programmer, I’m troubled that Dems seem to believe Hispanic immigrants can’t qualify for skills-based legal immigration. Bringing in more scientists, engineers & doctors is good for US jobs. https://t.co/iugniZgJtL

Gee, who’s sounding racist in THIS exchange, Ilhan? And not for the first time, either. Lucky for her the Dems are too afraid of the intersectional backlash to censure her ravings.

And lucky for the rest of us that they’re afraid to tell her she’s out of line. Go ahead, Freshman Democrats, keep running your mouths and showing America who you REALLY are.

There ARE racists in our midst. It’s just not the same people the Media(D) have been pointing their accusing fingers at.

False Flag Attackers: Can The Guilty Parties Please Stand-Up? These Are The One’s That Admitted It! (Video)
March 6th, 2021 Sons of Liberty Media