If Chris’s tweets are any indication, Andrew must’ve been in possession of the shared Cuomo brain yesterday.

The Second Dumbest Man on Television™ (obviously the #1 spot goes to race-baiter Don Lemon,) has decided to dump on a rape survivor for advocating self-defense.

A new NRA ad featured Kimberly Corban who was raped in 2006 when she was a student at the University of Northern Colorado. Her story is horrific. She recounts the terrifying ordeal in her Ted Talk about how her story was hijacked by politicians and lobby groups on both sides of the aisle:

Dang! That is one helluva strong woman! I think I just might have a new hero.

This was the woman that Chris Cuomo decided to dunk on.

The NRA ad was released yesterday and just minutes later, Cuomo retweets the ad with the enigmatic comment, “Only in America.”

Like most of the anti-gun advocates, Cuomo was unarmed to defend himself. Of course, defending himself in this sense requires a modicum of intellectual ability, which, as we have previously discussed, is not something that Cuomo seems to be in possession of — at least on alternate days.

It didn’t take long for Cuomo to be properly scolded for his ludicrously bad tweet.

You tweeted *squints* “Only in America.” What were your intentions exactly about attempting to dunk on a sexual assault survivor and self defense?

Are you really judging a rape victim for her decision to be armed?https://t.co/dCr1Uk9xgU

You do know she is a survivor, a rape victim , right?

WTF would you dump on a rape victim, @ChrisCuomo?

Image what you would say on your show tonight if President Trump had tweeted what you did?

I guess you’re cool with women being defenseless against rapists?

You would prefer that she, a rape survivor, be rendered defenseless if (heaven forbid) another predator entered her home, trying to harm her or her kids? You are one pathetic coward, Chris.

you good with women not defending themselves Chris?

Kim Corban is a rape survivor who is now choosing to tell her story & arm and protect herself. I think a real question is why so many men in the media always treat conservative women like our values, life experiences and perspective is some kind of joke. Like we are valued less. https://t.co/ky9QImMOeI

Of course, it wasn’t clear what exactly the tweet even meant.

What the hell is that supposed to mean

I am struggling to discern the point you think you’re making.

PSA for the day: “Don’t tweet without a brain, y’all.”

Some pointed out that yes, “Only in America” are women permitted to protect themselves with a firearm.

Yes. Only in America does a woman have the choice to defend herself like this. Thank goodness.

No, not only in America, women are preyed upon by stronger predators across the globe. The great equalizer and best means for self defense is a gun.

I have a gun and my CCL for this exact reason. I’m responsible for protecting the lives of my children. This is just one way to ensure their safety if the unthinkable happens. I couldn’t live with myself if I didn’t even try.

Chris wasn’t making the point that we think he was trying to make.

This rather implies that you'd rather a woman be defenseless from rape or murder or whatever else a predator has in mind, you sick POS. https://t.co/gdmfdkVgnU

People like Chris constantly use rape victims to shame people who are against abortion, but when people suggest that arming women is an effective way to decrease the number of rapes and, hopefully, rape victims, suddenly it’s morally repugnant

Arguably, the best answer was from Janice Dean of Fox News:

You might want explain this tweet a little better to those of us who’ve actually had to face predators in our own homes and defend ourselves without a big strong man like yourself?

I didn’t have a gun to protect myself when he woke me up in my apartment almost 20 years ago. But I think about it every single day and how maybe if I had one I could’ve stopped him from raping someone else.

Our girl, Kim, didn’t let it slide, either.

Hi @ChrisCuomo. Looks like you forgot to tag me. Care to chat about this?

The epic ratio (more comments than Likes or Retweets)… 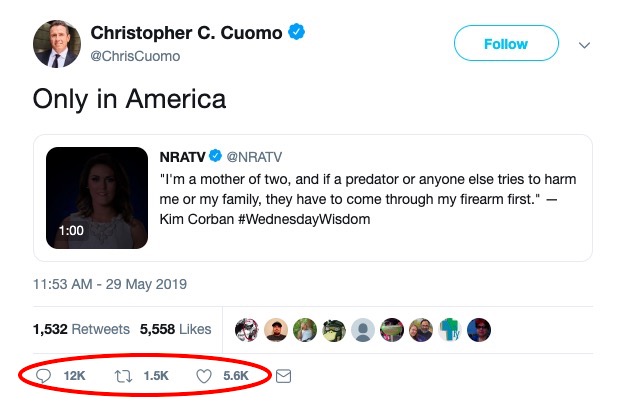 …and especially the Tweet from Janice Dean forced Cuomo to attempt to defend himself, and whoa, Nelly, was it bad!

1/2 You are right. No offense intended. Too short on twitter. “Only in America” are we still debating the legitimate right to protect oneself like you and many others vs sensible way to keep guns from wrong people. Only here can we not address the issues around school shootings https://t.co/74s8RxcHgo

Every time you wander into this area you fall ass-first down a ravine.

Oh, so he’s all about the Second Amendment suddenly? Yeah, I’m not buying it…

2/2 in a way that respects the ill and also people who get guns legally (as I did) and use responsibly (as I). We are stuck with good people having to beg to keep a right and not getting done what is right for federal reasonable restrictions and mental health reform https://t.co/74s8RxcHgo

So, it’s cool for him to have a gun but not Kim Corban?! This just mucks up his original tweet even more!

I am sorry for confusion. I take the issue and the stories of violence seriously. Muscles don’t stop bullets, as you know. Again, I have always been clear about the right to own and what needs to be improved. Apologize if you were misled. https://t.co/74s8RxcHgo

“Apologize if you were misled”? So, everyone else got his nonsense Tweet wrong because we assumed he was dunking on a rape survivor advocating for gun rights in a sneeringly condescending way. (Which he was.) How are we supposed to interpret the Tweet when we know that he’s all-in on his anti-NRA stance? Should Cuomo be surprised when we assume that he’d bash the NRA ad featuring a rape survivor with impunity? This is the same fool that has defended Antifa as being a harmless anti-fascist group. He also sat there slack-jawed as Christine Quinn made the most ridiculous claim about pregnancy ever. The guy is a total partisan hack posing as a “journalist.”

Cuomo went on to address some of the other criticisms.

You know I didn’t mean that. I am a gun owner. Thus I see a legit right to bear and that is clear in law. Why pretend I am some heartless hater? I expanded what I said and there is no reason to twist it here. I know that’s what Twitter is but it solves nothing https://t.co/px17cI5Qvr

Read what I tweeted. You have my intentions wrong. A survivor story and the right to bear arms is not where we are stuck…We can’t get past this deadlock on all or none to make reasonable changes to help reduce deadly violence. Happy to talk if you have more questions https://t.co/y0VIsW4VYC

Man, that is some furious backpedaling, right there!

“I’m sorry if you misinterpreted my stupid comment” what a clintonian apology.

Note, however, that Cuomo answers the blue checkmarks… but not Kim Corban.

Why are you responding to everyone except for Kim Corban? https://t.co/6BydstkPke

Oh… so your tweet was in SUPPORT of the @NRA?

OK, Chris… we all believe you. https://t.co/2A4BvMFKAk

Also, we did you respond to @JaniceDean and not to @Kimberly_Corban, the person you mocked and insulted with your ignorant tweet?

Let’s be real, we all know that this is just “I HATE THE NRA!”

Dude…. WTF does your “only in America” tweet, in response to a rape survivor’s NRA tweet, have to do with school shootings????? You backpedaling like a crawfish and it ain’t working.. Just say “I hate the NRA” and be done with…@ChrisLoesch @DLoesch https://t.co/1Qu1B4E9qj

Let’s end with some perspective, shall we?

You're full of shit and no one is buying it. https://t.co/87jsMrMMrQ

Dumb people trying to obfuscate after being caught is the dullard's theater of our age.

Nah, if you proactively decide to try and dunk on a rape survivor's desire for personal safety, you can fuck all the way off.

Yes! Cuomo dug himself in deeper and revealed just how incredibly stupid he actually is, and worse, how he thinks that he’s actually the smart one in the room.

No, Chris, you’re this guy:

But, maybe, just maybe he can learn.

Here’s Lesson 1 in How To Not Be A Complete Pussified Jackass: