Keep in mind, that the self-righteous unhinged guy shooting the video is an elected LEGISLATOR… picks fights with women and children.

Whatever happened to leftist objections to ‘mansplaining’ and the chant of ‘no uterus no opinion’?

Oh, they only play that card when it’s a useful cudgel to silence the ‘other’ side. There’s integrity for ya.

Meet Brian Sims. He’s a State rep elected in Pennsylvania, and his favorite pastimes include being a Bully on Twitter…

What an embarrassment you are both as a man and as a member of the gay community.

You harass people because of their age & skin color?

You don’t believe that women have a right to express themselves as they see fit?

[Note: This particular video doesn’t embed here, but it does play via Twitter, if you really care to see it.]

Including using his platform as an elected official for the purpose of doxxing a woman with whom he disagrees and calling his followers to protest outside of her private home. (4:34) This self-righteous hectoring went on and on.

Way to pick a winner there, Pennsylvania. Is he seriously the best you guys could scrape up?

Yes, this loser was actually offering a $100 bounty for the ‘doxxing’ of minors.

Did you catch the teenage girl that he called racist and wanted to doxx saying “I’m pretty far from white.”

But everyone else is always the a-hole, right? I guess this guy wasn’t really paying attention to what happened when the Social Media Mob was unleashed against the Covington Kids. Lawsuits.

And he tells himself he was doing it as a white knight crusader of all things good and just. Not so much.

Not only does he NOT have a uterus, so (by their own dumb rules) has no right to tell a woman what to think on the issue, but he is a gay man, who (presumably) has zero possibility of EVER needing the sort of services Planned Parenthood could provide.

If anybody needs to sit down and shut up (by the Left’s standards of who’s ‘allowed’ to have an opinion on abortion) this guy needs to take a whole stadium of seats.

He doesn’t know the woman, her story, or what motivates her to do this. Maybe she had an abortion herself, and has regretted it ever since and is driven by a compassion that makes her want to spare any other mother that kind of pain. That is the story of some activists.

As for his ‘racist’ angle, (not only did he just turn his bile against a young female ‘POC’) good luck to this white guy trying to call this african woman racist:

Oh gosh! This is one of the few times I really wish I live in America. I would have gone to peacefully protest outside @BrianSimsPA’s favorite branch of PlannedParenthood.

I’ll would have stood there in my complete African attire and I’ll dare him to call me racist or sexist??‍♀️ https://t.co/zWmJVTp3Ad

In fact, she’s made a pretty convincing argument that self-righteous liberals like him are the racists. They have become ‘colonialists’ in their habit of aggressively pushing abortion on an African culture that was never asked whether they want or even agree with it.

He tries to hide behind the ‘intersectionality’ of promoting this as a gay man, only to get put in his place by a far more reasonable gay man. 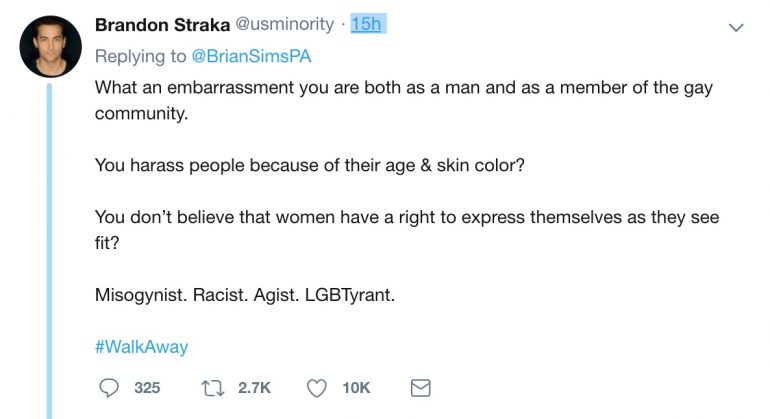 It was aggressively hateful morons like Brian who played a big role in ‘red-pilling’ Brandon and making an otherwise ‘liberal’ guy switch parties.

Does he realize that this is the same state where abortionist Kermit Gosnell was sentenced to prison for the horrors in his abortion mill? A man who reserved his ‘cleaner’ rooms for his white patients? Here’s an example of what he thinks a woman in Philadelphia must not speak out about:

Karnamaya Mongar survived 20 years in a refugee camp after fleeing war-torn Bhutan, but died months after arriving in the U.S. in 2009 and seeking an abortion.

Mongar, 41, is the subject of one of eight murder counts in the ongoing Philadelphia trial of Dr. Kermit Gosnell. Gosnell, an abortion provider, is also charged with killing seven babies allegedly born alive.

Through a translator, Mongar’s daughter testified Tuesday about the labor-inducing drugs and painkillers her mother was given as she waited hours for Gosnell to arrive one night for the second-trimester procedure.
Source: DelcoTimes

More black babies are now aborted than born in New York, a rate much higher than other ethnic backgrounds.

Explain to us how wanting MORE black babies to be welcomed into the world, where they can enjoy life, liberty and the pursuit of happiness is somehow motivated by RACISM?

His hatred fo Christianity is obvious. But he seems to forget so quickly — the same Constitution he has been browbeating a citizen about on social media also ensures protection of her rights to practice her faith, without needing the consent of some bonehead legislator’s permission.

He may think it’s open season on Christianity, and that he is free to bully people he hates. All he is doing is justifying his own arrogant bigotry, telling himself he’s doing it in the name of the greater good.

A bunch of guys in stupid white hoods once did the same thing. And, if he hasn’t noticed, history does not look kindly on them, either.

Whatever heroic lightbringer you may be in your own fever-dream imaginings, you’ve exactly what you claim to hate — a self-righteous blowhard who thinks he’s got some kind of divine right to tell other people how to live their lives.

And the People of Pennsylvania deserve better than someone who thinks the people are accountable to him, instead of the other way around.