Of the millions of Leftist Americans, THESE are the best contenders their side could dredge up?

Last time around many said Hillary was the worst candidate the Democrats could have possibly nominated. Maybe that was true.

Then again, after looking at 2020s crop of Presidential wannabe’s, maybe not.

“You sort of dream about competition like that. But who knows?” — DJT

Trump’s like a kid in a candy store right now. His biggest worry is slapping around their contenders too soon and knocking out the ‘easy’ ones too early — like he probably has with Pocahontas, Elizabeth “1/1024” Warren.

Not everyone out there has attracted enough notice to warrant one of his devastating nicknames. In fact, Joe Biden has sucked all the oxygen out of the race for the time being and has taken an obscene lead over the other contenders.

But four of them now have their nicknames.

What does he have to say about the ‘contenders’?

Bernie gets to be called ‘crazy’. (Which seems pretty accurate.)

Beto got mocked over the ‘Reboot’

And there’s still one other guy on his list. That would be Alfred E. Newman’s doppleganger: ‘Boot-Edge-Edge’ 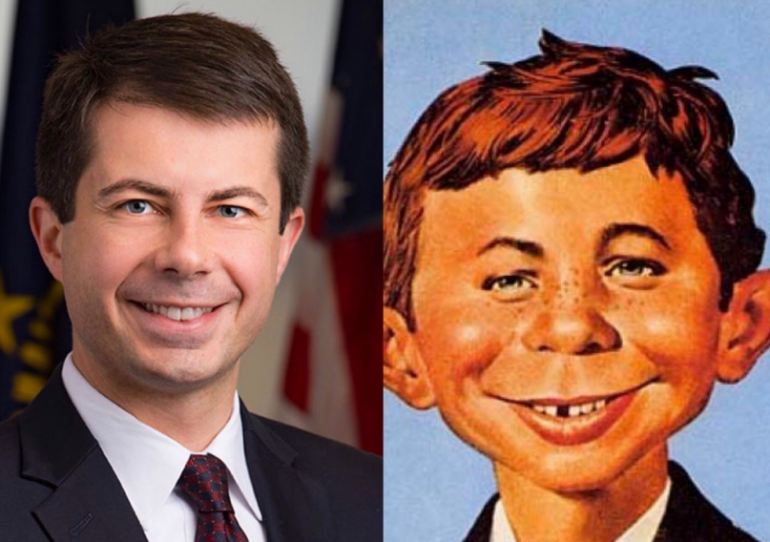 Notice everyone on this list is a white dude? Don’t blame Trump for that. Blame the Democrats.

Go ahead and ask THEM why a couple of old white guys are leading the party of Weaponized Intersectionalism. Especially when women make up something like 51% of the vote. But make sure you get their sputtering replies on video.

I’m sure we’d all love to see that.

Ask Hillary. Maybe it’s somehow Russia’s fault that Democrats aren’t supporting their female or minority candidates. Or will she once again try to blame the husbands?

Either way, Trump seems to be having the time of his life…

And you just KNOW that if he’s feeling jovial like this, the 2020 campaign is going to be a wild ride.

It’s almost enough to make you feel sorry for the other contender.