AOC wants you to take her seriously… just don’t take her literally.

Rep. Alexandria Ocasio-Cortez(D-NY) has made the need to address anthropogenic climate change one of her signature issues. And no wonder — if the world is indeed ending if we don’t cut emissions, then, what’s the point of the “big government” solutions like VA healthcare for all and USPS banking, (plus whatever other fever-dreams she has) thereby creating a socialist utopia for the children that haven’t been aborted? That is — if you are one of those horrible people that, for some inexplicable reason, want to have the human race continue to exist by making the environmentally unfriendly choice to actually have children.

She was so adamant that this was an urgent issue that must be addressed immediately that she stated time and again that emissions must be cut by 50% in 12 years or “the world is going to end.”

But now, she says that it was “dry humor + satire” and that you’d have to have the “social intelligence of a sea sponge to think it’s literal.”

This is a technique of the GOP, to take dry humor + sarcasm literally and “fact check” it.

Like the “world ending in 12 years” thing, you’d have to have the social intelligence of a sea sponge to think it’s literal.

But the GOP is basically Dwight from The Office so who knows. https://t.co/pmkwrdeAnq

You remember Dwight Schrute from The Office, right? He’s the bumbling, socially awkward loser who thinks he’s the smartest guy in the room.

Really? So the GOP that are “fact-checking” her doomsday predictions are Dwight, are they?

Let’s take a little look at AOC’s “dry humor + satire”, shall we?

She seemed pretty serious when she said it at the MLK event and claimed that “this is our World War II.”

But that was just a joke, you guys.

She said it again on an MSNBC townhall event with Chris Hayes, and people didn’t bust a gut laughing.

AOC has the social intelligence of a sea sponge pic.twitter.com/mcBdHEny75 https://t.co/C7jS9j3sTh

Sure looks like the folks ⁦@USATODAY⁩ took @AOC literally. She got a lot to answer for.
Should call off her #GreenNewDeal right now https://t.co/SnjENdRecZ

It wasn’t just USA Today, either. AOC partnered with The Intercept and recently released a video where she shows how the Green New Deal changed the world for the better.

Ocasio-Cortez this morning: "the 'world ending in 12 years' thing, you’d have to have the social intelligence of a sea sponge to think it’s literal."

The promotion of that video is her pinned tweet. The caption reads, “Climate change is here + we’ve got a deadline: 12 years left to cut emissions in half. A #GreenNewDeal is our plan for a world and a future worth fighting for. How did we get here? What is at stake? And where are we going? Please watch & share widely.” 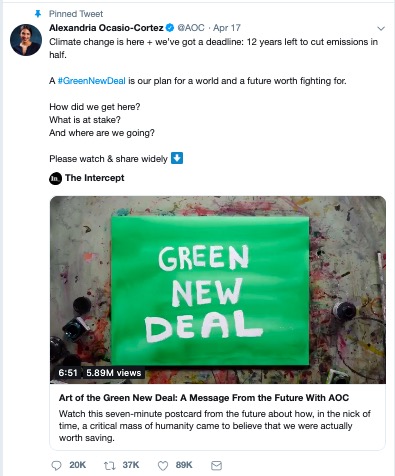 Does that mean that AOC is Dwight Schrute from The Office?

Dear Lord, she is!

But hey, she’s the boss because at least she’s trying, right?

It is a joke, AOC, just not in the ha-ha funny way that you’re claiming it is.

Speaking of funny, let’s hop into the DeLorean and head back all the way to April 2019 where AOC had an Instagram Live Q&A with her followers while sipping on some wine and talking with her mouth full.

During the session, she said that if people were callous enough to joke about climate change, they should realize that the internet is forever and their grandkids will sit in judgment.

Soooo… does that mean that she’s Dwight for “joking” about the world ending in 12 years?

Maybe she should have learned from her “future self” in the Green New Deal video.

Just like everything else that AOC says, she wants it both ways.

Bill Gates Being Charged For Murder: This Is How You Stop The Virus
November 29th, 2021 Sons of Liberty Media