Is equality a good thing? That depends — that word now has so much baggage, it can mean many different things to different people.

If by equality, you mean ‘treat all people with a certain level of decency, no matter who they are’ then yes, equality is not only a good thing, but a profoundly American ideal.

But when your brand of ‘equality’ pits one set of people against another set of people and (worse still) silences dissent, that’s a whole other ballgame.

George Orwell gave Animal Farm as a warning, not an example to be followed: 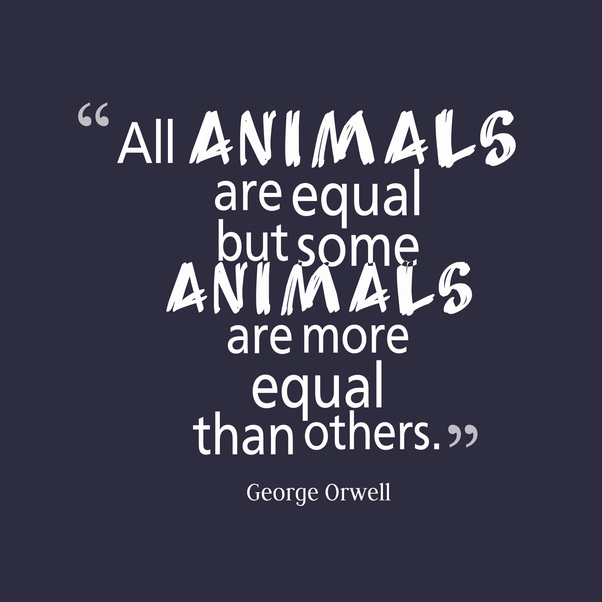 Not learning from the past, this is the situation we have with the Democrats (who have shown themselves increasingly hostile to Christians and the historic Christian faith itself) and their new ‘Equality Act’.

Heather Clark enumerated some potential points of conflict inherent in the proposed legislation:

Under the guise of equality, a bill passed the United States House on Friday that would add “sexual orientation” and “gender identity” to federal civil rights law, and would preclude entities — including Christian organizations and others who do not want to participate in affirming sinful behavior — from living out their convictions in society without the heavy hand of government coming down upon them.

H.R. 5, also known as the “Equality Act,” passed mostly along party lines with a vote of 236 -173, and with no Democrats voting against it. Eight Republicans voted in favor of the measure, with three being from New York: Reps. Susan Brooks of Indiana, Mario Diaz-Balart of Florida, Brian Fitzpatrick of Pennsylvania, Will Hurd of Texas, Greg Walden of Oregon, and John Katko, Tom Reed and Elise Stefanik, all of New York.

The bill would amend the 1964 Civil Rights Act — which currently prohibits discrimination on the basis of “race, color, religion, sex, or national origin” — to add “sexual orientation” and “gender identity” to the list. The two terms would be included as pertaining to matters of “sex” discrimination.
Source: ChristinanNews

…Most commonly, the bill prohibits discrimination in employment and housing, meaning that faith-based employers, Christian schools and churches cannot fire an individual for engaging in same-sex behavior, nor can landlords with convictions about marriage decline to rent to two men or women. Women’s shelters would also not be permitted to turn away men who identify as women.

…Several lawsuits have been filed in recent years against faith-based hospitals that have declined to allow the performance of sex-change related operations on the premises — mainly women who sought the removal of their uterus so that they would feel more masculine physically. …

…The bill has therefore generated objection from Christians and lawmakers alike.

This kind of ‘equality’ suffers from the same fatal flaw as the Left’s other ideas of being progressive. They see inequalities as something that needs manual rebalancing — not realizing that every aspect of the world around us is perpetually in a state of imbalance under correction.

Weather. The food chain. Even our own bodies.

They’re all in a constant state of flux. The (supposed) Progressives believe themselves capable of manually correcting that imbalance, without giving thought to what new imbalances would be caused by their interference.

They see these things as a zero-sum game, not a dynamic interaction of various forces.

They see two classes: oppressed and oppressor. They seek to shorten the leash on the ‘oppressor’.

In this case, it will come into direct conflict with Constitutional freedoms of Religion. This, to an aggressively secular group, is a price they are more than willing to pay — consequences to our freedoms be damned.

You can read the full text of HB-5 here.