Can you imagine anybody in the press objecting if they had been wearing ‘Hope & Change’ gear?

But since it’s “MAGA”, they’re suddenly the hall monitors of uniform enforcement.

Airmen onboard the USS WASP wearing patches on their jumpsuits that read “Make Aircrew Great Again.” The patches include an image in the center in the likeness of President Trump. pic.twitter.com/rQKAyrcDte

U.S. service members attending a Memorial Day address by President Trump during his overseas trip to Japan were photographed wearing patches inspired by his campaign slogan, and this may have violated the Pentagon’s strict rules barring soldiers from showing political preferences.

Navy spokesman Samuel Boyle said in a statement to CBS News, “Navy leadership is currently reviewing this instance to ensure that the wearing of the patch does not violate DoD policy or regulations.”

The group of service members aboard the USS Wasp in Yokosuka, Japan, were photographed by Wall Street Journal reporter Vivian Salama. The airmen posing for the photo all donned matching patches showing what appears to be the president, along with the text, “Make Aircrew Great Again.” Wire services photographers also captured images of the same military members.
Source: CBS

There are two likely explanations.

First: Could it possibly be that they suspected the Commander-in-Chief might visit, and they had these at the ready so they could get noticed by the Big Guy for a personal greeting?

Second: if they’ve been wearing those patches before now, doesn’t that say something about the how ‘serious’ this infaction is in the eyes of their CO?

It was Memorial Day. Pretty telling that the Media’s first response is to look for wrongdoing on the part of those who’ve signed that blank check to the country. 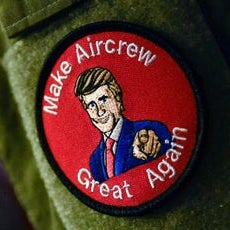