Shameless attempts to politicize and hijack the issue to prop up a specific political party did NOT take long at all.

Let’s all forget that the killers were from THAT SAME political party. What’s really important here is that gunfire in the schools be leveraged to support the Democrats. Won’t the killers be pleased to see their hatred for Trump being put to such good use?

The students, to their credit, weren’t following along with the script quite how they were expected to.

They were there to grieve the dead and injured. To celebrate a heroic act of defiance that saved an untold number of lives. To grapple with the issues that might have led to one their own peers getting shot dead before their eyes. To cope with the anxiety of what might happen to those still in the hospital, or to grapple with their own shattered sense of what it means to feel safe in a public setting.

None of those things are what the ‘organizers’ had in mind when they planned the ‘memorial’ event. 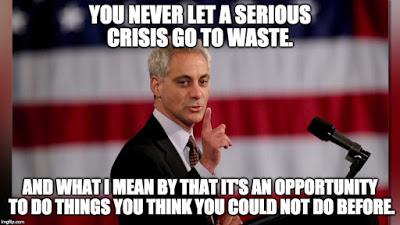 Once they recognized this as a nakedly political stunt, the students pushed back.

Hundreds of students attended the vigil held in nearby Highlands Ranch High School and quickly realized that the event was intended to push for gun control and was not about remembering Kendrick Castillo, their 18-year-old classmate who was killed when he attacked the assailant, allowing some of his classmates to escape.

Shortly after Reeves’ politically charged comments, students got up and stormed out of the high school and chanted, “Mental health!”
Source: DailyWire

The students voted with their feet. Watch here:

Democrat Rep. Jason Crow said "thoughts and prayers" were "empty and hollow" at the vigil

Crow and Democrat Sen. Michael Bennet both called for more gun control, neither could state how any law would have prevented the shooting

Both *did* recognize the student who died.

Others said that it was because students weren’t able to speak.

Students from Highlands Ranch HS hosted a community vigil in support of STEM students. A group of STEM students and other walked out of the event after a few voiced concerns about not being listed as speakers for the vigil program. #9News pic.twitter.com/3kA7bbnjAS

Typical of teacher unions. Kallie Leyba—DougCo teacher union thug President—is so blind and ignorant in her headlong pursuit of her political agenda that with #STEMschool students right there in the audience she can’t figure out a way for them to speak.https://t.co/0cuFEqlxsI

You can watch the walkout here:

Students at a vigil for the STEM School shooting in Highlands Ranch reportedly walked out of the event after Democrat politicians Jason Crow and Michael Bennet made remarks and students said the tragedy was being politicized.

“Let STEM kids speak!” shouted one voice in the crowd May 8 during the event organized by Brady, which describes itself as a gun violence prevention organization.

…Kallie Leyba, president of the Douglas County School District’s teachers’ union, had her speech cut short by the student yelling for organizers to let STEM students address the crowd. Leyba responded that organizers couldn’t coordinate with students from STEM before the event.

“We’re right here,” a student in the crowd replied to applause.

…“It was all political,” a student said, as others talked among themselves and decried the political tone of the event. One speaker inside had mentioned the National Rifle Association, or NRA, as a reason they said national gun policy wasn’t adequate.

“Don’t use Kendrick’s name for political reasons!” another student outside shouted, as chants of “Mental health!” and “F— the media!” took hold. Said another student: “It’s not about the guns!”

A chant then began to direct the group back inside, where many more gathered around the lectern and students — including from STEM — began to speak.

One student led the crowd in the gym to hold hands and bow heads in a prayer for people to “fight not against each other, but for each other.”

That served as a turning point, when a long succession of students took turns on the microphone amid a calmer crowd.

One student said she met Castillo as a young child and went to school with him, adding he was “the kindest, gentlest soul you’d ever meet.” Another said he was angry that people “came to talk about gun control.” Some said they were friends with Castillo and attended school with him. One student called the vigil a “political stunt.” He added, “We walked out. We were not kicked out.”

The group held a moment of silence for STEM School and Castillo.

A news release announcing the vigil said speakers would include local elected officials, students with activist groups and “students, parents and teachers from STEM,” among others. Some local students did speak, but STEM students in the crowd felt unheard.
Source: HighlandsRanchHerald

Say whatever you will about ‘kids these days’, one thing even the most cynical must admit is that many of them have become a lot more savvy about when they’re being used as props in a larger game.

If they don’t appreciate the narrative their presence is being used to push forward, they will for damned sure let people know about it.

Good on ya, kids.

Here’s hoping the ‘adults’ in your town can get their sh*t together and offer a proper memorial to the heroism of Kendrick Castillo, and a proper forum where you can grapple with the all the usual benchmarks of ‘normal life’ having been swept away in a moment of horror.