Isn’t that what they have on their shirts to coordinate with their pink, knit kitty hats, and their “This P*ssy Grabs Back” sign at the Women’s March? 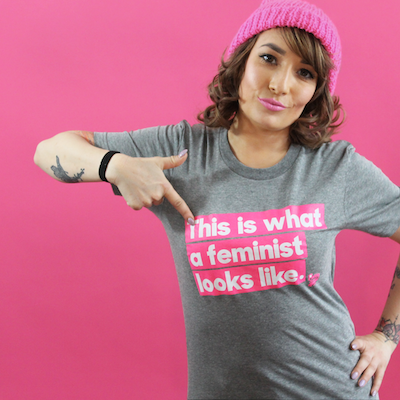 Why, I do believe it is!

But rememmber, kiddies, those pro-choice, “Shout Your Abortion” feminists are wonderful, sweet and gentle individuals that are just looking out for the fundamental human rights of women that are being stripped away by the patriarchy and non-women like Alabama Governor, Kay Ivey.

Actually, if you’re a woman that doesn’t ascribe to the Baby Corpse Corps’s view of abortion on demand and without apology, then you too, are a “non-woman.” Did you expect anything less from the group of people that dehumanizes the most vulnerable individuals — babies in the womb — as just a “clump of cells” akin to a cancerous tumor or a parasite?

Yes, once you dehumanize someone, you can justify violence against them. That’s what happened with the despicable history of slavery around the world, what is currently happening with abortion, and even the disturbing phenonmenon among radical leftists that anyone to the right of Bill Clinton is suddenly a Nazi and should be deplatformed and punched in the face.

That’s because having an actual discussion might humanize people, and as Jimmy Fallon has shown us, that can be dangerous.

Mary Baggett from Huntsville, Alabama, is a sidewalk counselor who speaks to women who are considering having an abortion. On May 3, 2019, Baggett was with other pro-life protesters standing on the sidewalk outside of Alabama Women’s Center, an abortion facility, when a couple of drivers started yelling at them from their cars. Baggett filmed the interaction and it escalated quickly as one woman exited her vehicle and assaulted the pro-life advocate for “filming her without permission.”

“The woman who came up to me punched my hands. I must have been holding the camera with both hands, cause one is bruised pretty bad but the one hand I hold the phone with is hurting too,” she said. “Then she grabbed my phone and ran to her car. I went after her and demanded she give me the phone back [and she] finally threw it in the grass.”

After Baggett found her phone, she went to retrieve it, but the abortion facility escorts began yelling at her that she was breaking the law and needed to leave. “The man who was in the first car, who she was with apparently, he came back before the police showed up,” Baggett continued. “I thought he was going to try to harm us so I started taking his picture and telling him the police were on the way. He left in a hurry. I called the police and filed a report.”

Baggett and another pro-lifer, Robert Mog, whose sign “Honk if you [heart] babies” in front of the same facility caused a black man to get a ticket for the “improper use of horn” back in 2015, says that it appears that there is an attempt to silence the pro-life voices by the clinic escorts.

According to both Baggett and Mog, there has been an increase in violence and hostility towards pro-lifers, and they believe it is due to the facility’s escorts. “These clinic escorts are trying to incite people to violence against us, in my opinion,” Baggett said. “The week before this happened, one of the clinic escorts called her former NFL husband to come and verbally assault me. He is huge and it was scary. I called the police on to the scene and made a report about that too.”

“We believe that the escorts riled her up into doing this – you can see one filming from behind,” Mog agreed. “They have been doing that a lot lately.”
Source: Live Action News

The idea of having “clinic escorts” to make sure that women make it into the clinic to pay their $300-$800 bucks to have a baby forcibly removed from their womb for their convenience is disturbing on its own. I guess there won’t be calls on the left for protesting “Big Abortion”, eh?

And yes, I know, they are there to “protect” women from being harassed by pro-life advocates, who can be how shall we say it… “passionate?” about the issue and forget that there is a woman attached to that growing baby. We have insensitive jerks on both sides, guys. The difference is that our insensitive jerks aren’t the ones ghoulishly calling the death of an innocent child a “choice.”

Baggett captured the assault on video and posted it to Facebook with the caption:

“This lady attacked me at the baby murdering mill! I believe the deathscorts were inciting her and her friend/boyfriend. I saw them being buddies with them earlier and hugging them. I’m ok but my hand is bruised and swelling up. My hands, feet and back are hurting. It could have been worse. Thank You Father for Your protection”

Baggett and Mog are still trying to identify the woman in the video.

This isn’t the first time that pro-life protesters have been assaulted for their peaceful protests.

VIDEO: Pro-Life Christian Bro BEATEN Outside Of Abortion Clinic Just For Saying This

And of course, Pennsylvania State Rep. Brian Sims was made famous for harassing pro-life teen girls praying in front of a Planned Parenthood clinic.

It sparked an impromptu Pro-Life rally outside of that same clinic that was attended by 1000 people. Not bad for just a few days notice.

Abortion rates are hitting record lows according to the CDC, which is fantastic.

It also means that the pro-life cause is gaining traction, and that means we need to keep up our advocacy for the most vulnerable and voiceless in our society — the unborn.

HILARIOUS: Livid Chick Rips Into Bros For Following Her Until They Tell Her Why (VIDEO)
February 25th, 2021 Clash Daily

NY Journalist Accuses Cuomo Of ‘Terrorizing’ Him For Doing His Job as a Reporter
February 25th, 2021 The Mental Recession