A video was making the rounds in which Pelosi looked pretty bad.

We later learned one version was doctored, with the speed slowed to 75%, but the voice pitch adjusted upward to sound like her — uh — ‘normal’ speaking voice. But even allowing for the fact that it was doctored, does she sound like she’s REALLY still on her ‘A game’?

Here is the video that was making the rounds at three-quarter speed.

(And here’s the ‘completely unbiased message’ you get from Herr Zuckerberg if you dare to click the ‘share’ button.) 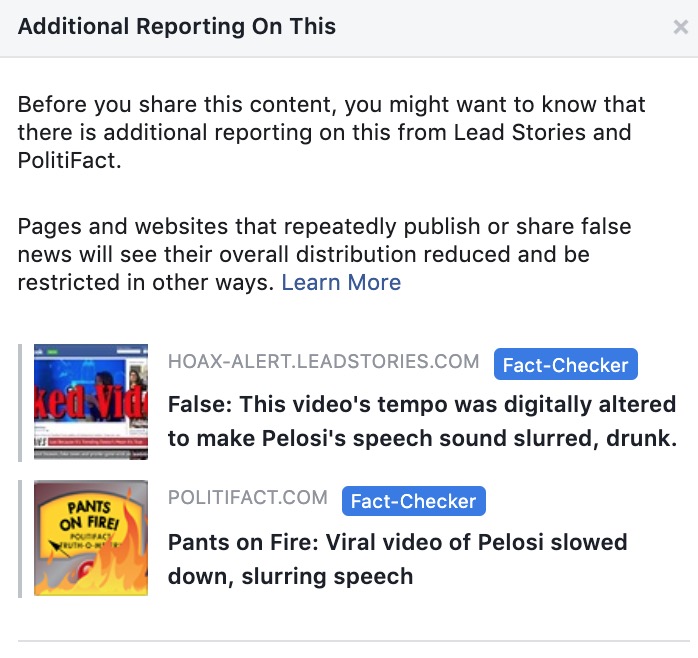 Politifact? You think we trust THOSE hacks? You can’t be serious, we’ve documented their overt bias before.

Here’s a different video, this one offered by Trump.

People are saying this is a doctored video, but it's not one of the videos WAPO identified as doctored. This appears to be an edit of moments where Pelosi was stumbling (perfectly normal) & edited together to make her look bad…not good, but not one of the doctored videos https://t.co/0EIHkCp2cS

It’s hardly anything new. The same woman who thinks it’s pefectly within the dignity of her office to imply that the President is committing a criminal act — not only without proof, but AFTER a $25M investigation found no criminal complaint against him — and then suggests that the man elected to represent the Executive Branch requires an ‘intervention’, does NOT get to cry wolf when the White House hits back.

The one video that was retweeted (not created) by Guiliani exaggerated Pelosi’s mannerisms (and since it was in her normal voice, it’s entirely possible he did like so many in social media and shared it after only a cursory look). But those are still HER mannerisms.

It’s not like anything is being pointed out anything about her that people haven’t been suggesting all along. For example:

.@DiamondandSilk opinion about Nancy Pelosi did NOT come from any Altered Video. We recently watched Nancy Pelosi in real time on live TV as we've done in the past. To Us, she looked like a Non-Functioning Alcoholic then & she still looks like one now #Intervention #AA #coverup

The many other times where she got completely lost in the middle of her speech were no better or different. We could have just as easily asked the same questions with any of them.

Is she going to claim that this collection of headlines just from ClashDaily were somehow made up, too?

Pelosi Has Been Quoting A Favorite Bible Verse For Years, One Problem — It Doesn’t Exist

As for the question about alcohol… the question is not asked without some supporting evidence. We have the bills from her air travel, after all.

Dear CNN: Report Says Pelosi Pelosi Charged Air Force $200K To Fly Her Around – Is That ‘News?’ From that piece:

It’s not just international flights, Rep. Pelosi has a history of using Air Force jets to travel between Washington D.C. and her district in California. In just two years, Pelosi billed the taxpayer $2,100,744.59 worth of travel expenses, a massive $101,429.14 was for ‘in-flight conveniences’ such as food and alcohol. Wowza!

Say what you want about the doctored video, and whether it was ‘fair’ to introduce that into the national conversation, we’ve seen far, far worse from other supposed ‘professionals’. (Like when the NYT published their little cartoon with Putin and Trump getting it on in a hotel room.)

But none of that changes the core question: is the woman who has on 5 different occasions called Trump “Bush” finally past her expiry date?