How desperate are they to push the ‘Orange Man Bad’ narrative ARE they, really?

Is there no trick the Left is unwilling to pull to undermine Trump’s poll numbers? One observer claims the color balance of Trump’s complexion (but not Geroge S’s) was skewed to make Trump look more red-faced than he does under natural lighting. One camera was changed, but the other was not.

It wouldn’t be the first time people have used low-key tactics to demonize a Trump official.

Remember now-disgraced #MeToo personality, Charlie Rose? When he interviewed Bannon for 60 Minutes, the AV team did the same color tint trick on Bannon.

And in another incident, remember, one guy got fired for pulling a similar stunt in Washington.

Caleb Hull, a DC-area political strategist, is claiming they’re at it again: 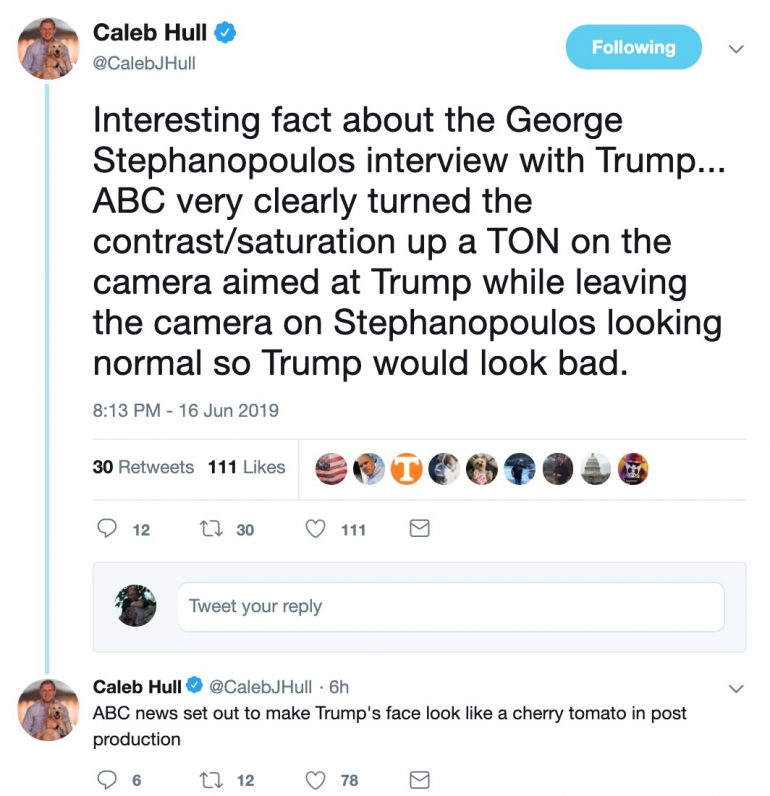 Here’s the video so you can judge for yourself. Now that we’ve taken a closer look, he could be on to something. It does seem a LOT more red than POTUS does in most other videos.

But Stephanopoulos’s affinity for the Clintons has never been in doubt. In 1999, the now-ABC anchor recounted his “love” for Hillary Clinton and the heartfelt affection he received in response. On page 428 of his memoir All Too Human, Stephanopoulos recounts Bill Clinton’s reelection night, 1996. After embracing the then-First Lady, Mrs. Clinton allegedly blurted, “I love you, George Stephanopoulos.” The political operative responded, “I love you too.”

But an interview with an obvious political hack looking for a “gotcha” isn’t the issue. The real issue is that the video was tampered with.

I mean, it was SUPER important that a blue-collar worker with a criminal record who tweaked a video of Pelosi to play at three-quarters speed and make her look (more) stupid, mush-mouthed and inept than usual get publicly ‘outed’ for his sins.

Because Pelosi, the light-bringer, must be protected at all costs. They surely feel the same way about all public figures right?

So, if it turns out that the video WAS edited, we know that ABC program (run by a former Clinton employee) is an open propagandist willing to lie to push a narrative, they should be filed in the same intellectual category as grocery-aisle tabloid papers about ‘son of Sasquatch’ and alien abductions.

Are they SO married to their ‘Resist Trump’ message that they’re willing to put party loyalty above professional credibility?

Deceptive cuts, and quotes out of context are a tried-and-true media dirty trick. (See: Charlottesville ‘both sides’ misquote.) But to tamper with the image itself to deliberately make someone look less natural? Have they become THIS openly corrupt?

Then again, maybe they have.