Mark your calendars — you DO NOT want to miss this!

While Jim Acosta whines about how difficult it is to be a “journalist” in the United States in 2019, conservatives are mocked by Acosta’s Media(D) colleagues for complaining about Big Tech censorship.

Anyone to the right of Karl Marx has been labeled a bigot, racist, sexist, misogynist, xenophobe, homophobe, transphobe, and a whole host of other -ists and -phobes. The ubiquitous labels “alt-right” and Nazi will be slapped on you faster than you can say “First Amendment Rights” because the Left has no idea what any of those terms actually mean.

Conservatives have had their websites targeted by Leftist Thought Police; they’ve been subjected to Media Matters advertising boycott campaigns; Facebook has banned right-leaning news sites en masse in a series of Great Purges; Twitter locks accounts; PayPal and Patreon have booted conservatives from their platforms; YouTube demonetizes videos that they don’t like, even conservative comedians like Steven Crowder and a 14-year old girl who posts videos criticizing Islam, social justice, and who happens to be pro-Trump.

God alone help you if you even suggest that abortion is murder, that socialism is not a sound ideology, that securing borders and enforcing current immigration laws is beneficial to the country, question the “self-identification” with regard to gender, or point out that pedophiles are big fans of “Drag Kids.” You. Will. Be. Targeted.

Ravelry supports you in your self-identification as a demisexual non-binary male-attracted androfemale, but… not if you wear a MAGA hat. If you dare express your intention to pull the lever for Trump you are banned because of your “overt white supremacy.” 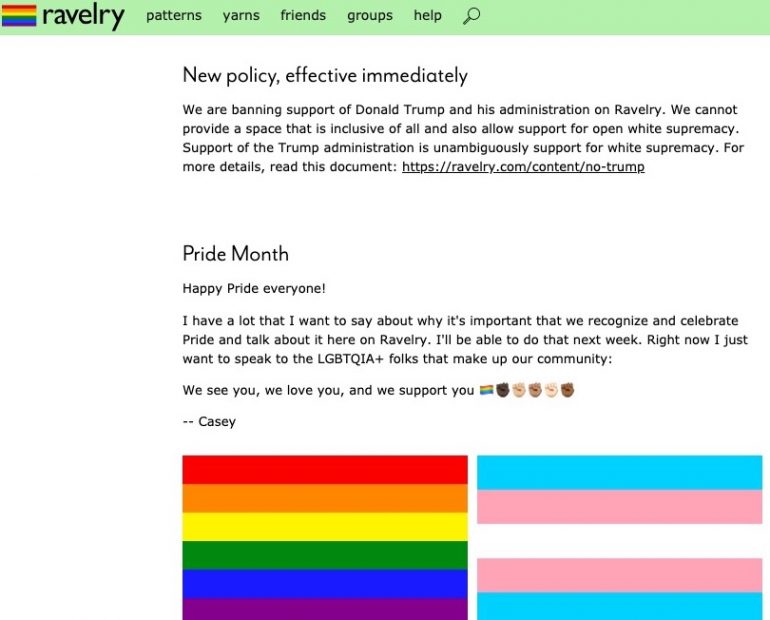 So, this brown-skinned crafter writing this article is no longer welcome on Ravelry. I’ve had an account for 10 years. Good luck getting rid of me, leftists. I ain’t goin’ without a fight. Michelle Malkin pointed out many years ago that a lot of knitters are crazy leftists, and well… she seems to be right!

To be clear, this is a website for looking up knitting and crochet patterns and to track how much yarn you’re hoarding. It’s not a political site, although some people apparently use it as a social media site. (I don’t.)

This Ravelry thing shows just how deep the hatred of the right is. Conservatives are no longer free to express their opinions anywhere. This is deliberate marginalization.

It’s time for conservatives to push back.

How do you do it? This is a David and Goliath fight. The enemies of freedom don’t want to fight openly, they want to work from behind the scenes and erase you.

America is on the verge of another Civil War. Unlike the battle of the late 19th century, however, our enemies are not challenging us on the open battlefield. In an act of cowardice, they work behind the scenes to censor and suppress conservative content in the digital era. Economic terrorism is the only way to describe it.

Well, that’s where the Censored conference comes in.

One guy that knows a thing or two about censorship is Dinesh D’Souza and he’s headlining the one-day Censored conference on September 14 in Atlanta, Georgia.

I’ll be keynoting this important conference on digital media censorship in September in the Atlanta area. Details here https://t.co/ngKdYXotxX

That guy… Man, I love that guy! He just says it like it is.

There are going to be some other great speakers there as well — Dr. Gina Loudon, one of the founders of the Tea Party movement and a really smart cookie, Gary De Mar, writer, lecturer, and former president of American Vision, and, of course, the Big Dawg of ClashDaily, and badass artist, Doug Giles. Plus more to still be named.

The Cobb Galleria Centre in Atlanta is the place to be on September 14.

Don’t let the Leftists control the narrative and eliminate your ability to express your views.

It’s time to push back against digital censorship.