Well, that’s a real shocker, isn’t it? Not to anyone paying any attention.

ClashDaily has posted several articles on the unsettling phenomenon of “Drag Kids.” To be clear, these are young boys that dress up like a caricature of a woman and “perform” — often in an overtly sexualized way. For some reason, the left (and these kids’ parents!) consider this a perfectly acceptable form of self-expression. The rise in popularity of RuPaul’s Drag Race has opened up the world of drag — which had previously been an exclusively adult form of entertainment — to the whole family.

This has led to some very awkward and disturbing moments like when a 9-year-old boy dressed as a girl took a photo with a naked drag queen. Some of those adult drag queens have openly admitted to “grooming” children during the library drag queen story events.

Don’t miss the Warriors & Wildmen podcast on this very issue. Doug and Rich ask if you’d let your young kids have a story read to them by a (plus-size, bearded) drag queen.

These “Drag kids” have been celebrated by the mainstream media, too.

The boy that sparked the convicted pedophile’s blog post is Desmond Napoles, a pre-pubescent boy that dresses in drag, was celebrated as a “trailblazer” and “brave” on Good Morning America last year when he was just 11 years old.

This is the kid that Tom O’Carroll is a big fan of. He wrote a blog post titled (try not to vomit) “Desmond is truly amazing — and hot!”

Apparently, the former chairman of the Paedophile Information Exchange is a big fan of drag kids. (Trigger warning). https://t.co/sV3mXP2loS

I wonder what Desmond’s “momager” would say about that?

Wonder no longer. She released a statement on Instagram.

This is extremely disturbing. Convicted pedophile Tom O’Carroll has written a blog post stating that Desmond is hot & feels sexy performing. He also sexualizes fellow drag kid Queen Lactatia. We do not approve of his statements & have written to @wordpressdotcom several times but they have yet to remove it. It is highly inappropriate to speak of minors in this manner .

I want to address some of his points. First, the Conservative press is currently accusing us of purposely attracting pedophiles & accusing the LGBTQ community of supporting this. What Tom O’Carroll has said is out of our control & we do not know him or associate with him or any other pedophiles or sex offenders. I think if a pedophile wants to act on their urges, NO child is safe .

Desmond does not move in a sexual manner or strip, at all. He has done costume reveals that reveal a fully covered costume underneath. He is never “scantily clad” or nearly naked & always is age appropriate. He does celebrity impersonations & does not choose to do sexy celebrities .

Desmond does not feel “sexy” in drag. What he has said is that at times in drag he “feels like a boy & a girl at the same time”. This isn’t to mean that Desmond is confused about his gender. He identifies as a boy & uses the pronouns he, him, his, even in drag. To Desmond, drag is dressing up into a character, performing, & expressing oneself through art. Desmond is also an actor & model. Desmond loves what he does & is never forced to do anything. He chooses everything from his costumes, makeup, songs, etc .

Desmond came out as gay when he was 11. Although, honestly we knew before then. He got same sex crushes that he would tell me about. Desmond knows the difference between a heterosexual & homosexual. Just because he identifies as gay does not mean he is sexually active or wants to be. He knows what sex is…he’s in middle school and has had sex education class. Apparently, he said all the kids giggled through the whole course. Anyone discussing anything remotely sexual on Desmond’s social media is immediately blocked & reported. We are just appalled at this whole situation – Mom .

Well, no. Drag is explicitly sexual. There are obviously different forms of drag like the comedy of Dame Edna Everage but the vast majority these days is of the “fierce” RuPaul variety. It is this form that the Drag Kids are mimicking. Desmond Is Amazing had performed at a gay bar dancing to “I’m Just A Girl” dressed as Gwen Stefani late on a Saturday night while gay men tossed dollar bills at him. 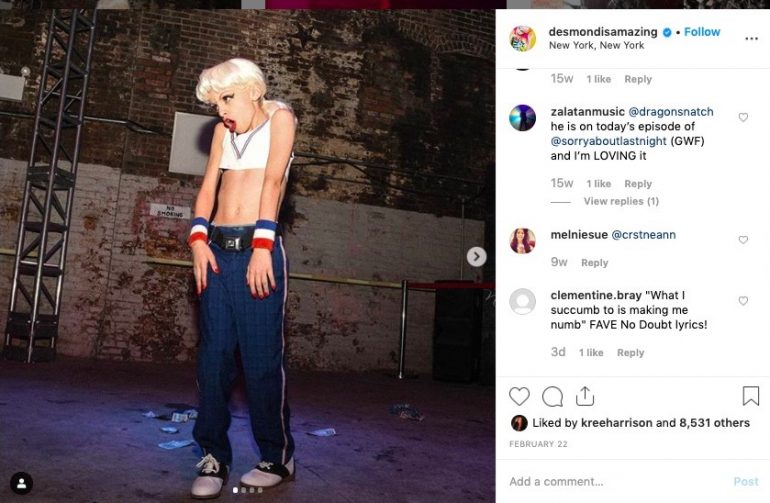 On the child’s Instagram page, there is a photo of Desmond standing next to an adult wearing a shirt that reads, “Angels have no gender but lots of sex.” 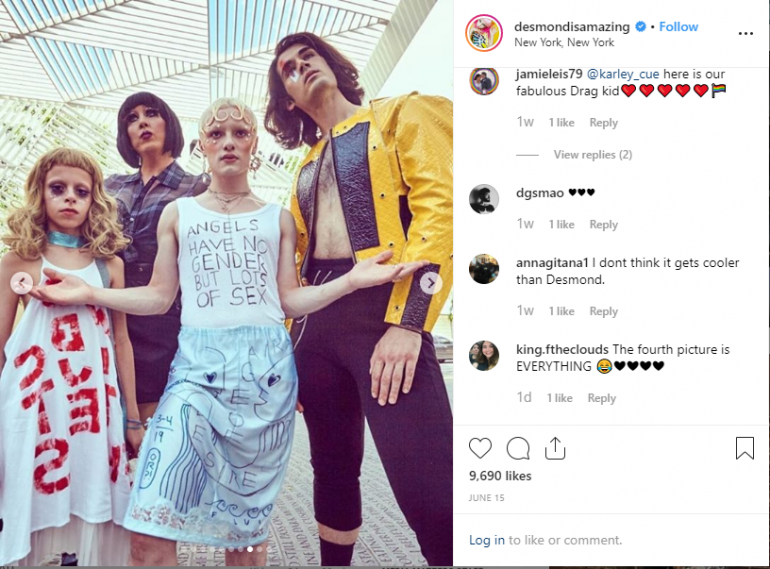 That seems completely appropriate, right? For some reason, it seems to have been scrubbed from the account. How strange…

Tom O’Carroll agrees that this kind of performance is indeed sexual and, as someone who wants to legalize sex with children, he heartily approves.

Let’s face it, when a pretty young boy tells the world he is gay and dances sensuously in front of grown men, wearing vampish dresses and makeup; when “she” strips off items of clothing or goes on stage scantily clad right from the off; when dollar bills are accepted as “tips” from an audience apparently wild with excitement; when all this is going on we are getting far more than just a celebration of gender diversity or an innocent display of precocious performance talent.

And that’s great. It is wonderful that a rare niche has been found in the modern, developed world within which at least a few kids can truly be themselves, in ways that deny neither their gender feelings nor their sexuality. Being a drag queen, or a drag princess if you will, puts it right out there, in the open for all to see. It says, loud and proud, “I am a sexy kid, with sexy feelings. It’s totally cool for grown-ups to get turned on by me. I love it. That’s why I do this stuff. It’s great. It’s fun. It’s me!”
Source: Tom O’Carroll’s blog

Ok, that’s way more than I can handle, so I’ll spare you any more excerpts from the disgusting article.

Who exactly is Tom O’Carroll? He’s now in his early 70s, has been convicted of distributing child pornography, and openly admitted that he is a pedophile. He is unrepentant and keeps his blog because he cannot legally act on his sexual feelings. As a matter of fact, he was the chair of the Pedophile Information Exchange (PIE) which was an active advocacy group seeking to legalize “consensual sex” between adults and children that ran from 1974-1984 in the United Kingdom. PIE lobbied to have the legal age of consent lowered to 10.

Even the vanguards of the 70s sexual revolution found PIE too extreme.

Tom O’Carroll is a pedophile. Every three months, two police officers visit him at home in England, a condition of his 2006 conviction and imprisonment for distributing child pornography. They are always polite, he says.

He keeps a blog. Because he cannot legally have sexual relationships with the people he wants most — children who have not yet reached puberty — he writes to relieve the frustration of unfulfilled desire, and of living in a society that tells him those desires are illegal, harmful, evil, sick.

Oh, and O’Carroll had been a teacher.

The sex offender registry in the United Kingdom is not public as it is in the United States. No one has to know the most private thoughts of a gray-haired former teacher with ice-blue eyes.

Weirdly, in our censorious age where videos detailing the labeling of pro-life sites as equivalent to pornography on an obscure Social Media platform are scrubbed for being too much, this bro can write this filth without anyone saying a word.

The critics of gender fluidity are censored, however.

Ask @wordpressdotcom & @automattic : Why does a man who served jail time for pedophilia, a founder of PIE, get to blog openly on your platform, yet sites by gender critics have been censored or removed without warning? (E.g. @LilyLilyMaynard , GenderIdentity Watch, GenderTrender) https://t.co/VMJ8NyK7EG

It’s now socially acceptable to allow children to be sexualized because if you don’t approve, then you’re a judgmental hater. Look at what is celebrated at Pride events now.

The pro-Drag kid culture, the LGBTQ+ lobby, and a convicted pedophile all say it’s fine.

I’ll stand on the other side of this issue, thanks.