Character and principles only REALLY matter when they’re tested. What happens when sticking by them REALLY costs you something?

With Abortion becoming the hot political topic, one of the default positions of well-heeled leftists is to financially coerce anyone who disagrees with them politically.

They do it because it can be dangerously effective.

Mozilla’s CEO was forced out for quietly donating to a group supporting traditional marriage.

Chick-Fil-A is frequently the target of boycotts, protests and political harassment.

Facebook, Google, Patreon and others are cutting people off from online income streams.

If financial pressure has been an effective means of leveraging political capital, why wouldn’t they keep playing that card? Agree, or ELSE, right?

Because not everyone can be bought, which brings us to the University of Alabama.

The University of Alabama responded on Friday by returning a $21.5 million gift that it received from Culverhouse, who had allegedly tried to interfere in the operations of the law school. The school also removed his name from the law school.

“The action taken by the Board today was a direct result of Mr. Culverhouse’s ongoing attempts to interfere in the operations of the Law School,” said Kellee Reinhart, the university’s vice chancellor for communication. “That was the only reason the Board voted to remove his name and return his money.”

“The school says the transaction to return the funds was processed Friday morning and that it will also return any accrued interest,” NPR reported. “Last fall, Culverhouse pledged to donate a total of $26.5 million over four years.”
Source: DailyWire 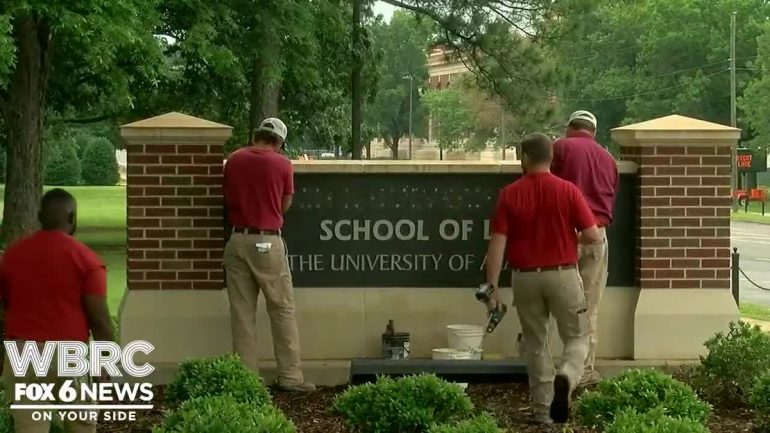 As you can see, his name has already been stripped from the signage on the school.

America was founded by people who put everything on the line in defense of their ‘first principles’. It was written right into the Declaration of Independence and lived out in practice:

“And for the support of this Declaration, with a firm reliance on the protection of Divine Providence, we mutually pledge to each other our Lives, our Fortunes, and our sacred Honor. — US History

It’s good to see some American still embody that same spirit and are not mere hirelings whose honor can be bought and sold for a price.

Do you know who ELSE took a similar stand?

But Peter said to him, “May your silver perish with you, because you thought you could obtain the gift of God with money! You have neither part nor lot in this matter, for your heart is not right before God. Repent, therefore, of this wickedness of yours, and pray to the Lord that, if possible, the intent of your heart may be forgiven you. For I see that you are in the gall of bitterness and in the bond of iniquity.” And Simon answered, “Pray for me to the Lord, that nothing of what you have said may come upon me.” — Acts 8

There is a point where pragmatic decisions have to yield to bedrock principle. And honestly, that point is probably a lot earlier than most of us believe.