Can someone explain why THIS ‘medical expense’ is any of the government’s business, let alone the taxpayer’s responsibility?

Shouldn’t the cash go to things like food and diapers?

Or… for keeping people from entering illegally in the first place?

If AOC and other Democrats are working hard trying to frame this issue as ‘Concentration Camps‘, can we really justify this ‘special treatment’ in our Immigration Centers?

Immigration centers are dangerously overcrowded yet the federal agency slammed with an onslaught of migrants provides a separate unit for transgender illegal immigrants as well as costly hormone therapy and a number of other perks. Thanks to an Obama policy continued by the Trump administration, Immigration and Customs Enforcement (ICE) gives transgender illegal aliens special treatment, including their own detention center in New Mexico that offers hair and makeup classes, a recreation area, gym, television rooms, a lab and pharmacy. There are also meeting areas for trans detainees to consult with free legal services provided by advocacy groups. American taxpayers furnish the hormone therapy, which “is not cheap,” according to an ICE director quoted in a recent news report about the New Mexico transgender facility, which opened in 2017.

The reality is that ICE has long offered transgender illegal immigrants special services under an Obama-era policy that the Trump administration can easily reverse but has chosen not to. ICE officials and frontline personnel are outraged that the Trump administration continues the policies, which some in the agency refer to as dangerous, expensive and foolish. Rank and file are at their wits end, according to ICE officials interviewed by Judicial Watch this week. “Two and a half years of the Trump administration and we still have Obama detention standards,” said Chris Crane, president of the National ICE Council, which represents 7,600 officers, agents and employees throughout the U.S. “This is not a new policy for ICE. It came out under the performance-based detention standards in 2011 and was updated in 2013 and 2016.” Crane said the National ICE Council addressed the agency’s detrimental detention issues with Trump’s first Homeland Security Secretary, John Kelly, who ordered changes that never materialized.

Under guidance issued by former ICE director Tom Homan, a supposed immigration hardliner chosen by President Trump to be a border czar, transgender migrants are to be treated with white gloves. At the time Homan was ICE executive associate director and in the 18-page memo he orders the agency’s Enforcement and Removal Operations (ERO) to let illegal immigrants self-identify with a gender different from that which corresponds with his or her biological sex or respond affirmatively during a risk assessment that he or she may be at an elevated risk in a detention setting because of his or her actual or perceived gender identity and/or gender expression. Federal officers are encouraged to use a certain script asking illegal aliens if they wish to disclose their gender identity, though they are not required to if they are “not comfortable sharing.”
Source: Judicial Watch

So… ‘let me be clear’: these precious snowflakes get televisions, makeup lessons and a recreation area, while everyone else is crammed into crammed conditions that are at best slap-dash solutions to a problem Congress seems unwilling to tackle. The left intentionally REDUCED available beds while doing nothing to stem the flow of illegal entrants, and then pretends to wring their hands in concern for the ‘deplorable’ conditions. 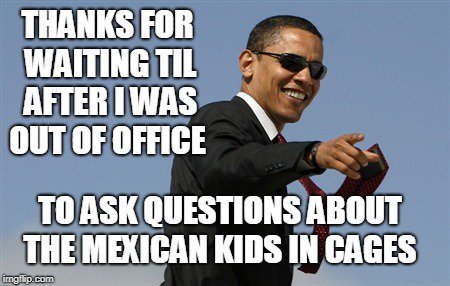 Well, at least now we know where children fit on the left’s victimhood hierarchy. Eminently useful as political pawns, but they’re well down the priority list… at least when a very well-represented lawyered-up group is itching to weaponize a political ‘slight’.

Are there any good reasons why we should shut down this special treatment?

Bodies of three children and a young woman are found by border patrol in Texas https://t.co/lstuLZn1WW

When the Left presses to keep these borders open, and blocks funding from going to those places where it is needed, there are ‘unintended consequences’… and people paying a price.

There is every possibility of those dead children being ‘rented’ so that our own asylum rules could be leveraged against us. But regardless of whether those children were traveling with families or as children-for-hire, they are just as dead either way.

It’s time we start holding DEMOCRAT feet to the fire, and ask them how may children will die for them to push open borders for political gain?

Should Trump take the ax to this PC policy? Or was his laid as a political trap to help frame Republicans as ‘evil’ and ‘insensitive’ to the latest grievance class?

Should the President take this on, or should he pick his battles?