The President invited a number of social media influencers to an event at the White House — and the Press gallery got their noses out of joint.

The Press Gallery was made to sit in the back of the gathering while preference was given to the very people these same companies have been working overtime to have silenced by Big Tech and kicked off of Social Media platforms… in a meeting that was organized so that Trump could hear back from people whose voices were being silenced — by them.

But journalists are the ‘great defenders’ of the First Amendment right? Well, except when ignoring it can knock off an upstart rival, anyway.

How did CNN report this event?

In a manner that was surprisingly similar to the way AOC behaves: get aggressive, and then tell the world that you’re a victim when someone pushes back.

Jim Acosta gave his Dear Diary entry by giving a conveniently-edited clip of what unfolded in the Rose Garden. Notice how the White Houses’ invited guests were demonized by the people who have the explicit privilege of being present to watch and report (supposedly ‘impartially’) on events as they unfold.

WH officials invited Trump's social media allies to sit in the Rose Garden. But after the event was over, West Wing aides did nothing when those social media figures began to verbally abuse reporters who were trying to do their jobs. A good snapshot of how press is treated by WH. https://t.co/j0Ys542dok

Looks pretty serious, when the clip gets cut like that, doesn’t it? Does it make you wonder what might have set Gorka off? Nah… only a Journalist is supposed to ask those trifling ‘why’ questions.

David Frum joined in: ‘supposedly’ to protect free speech rights ‘call to violence against reporters’. Clearly, he’s learned nothing from that time he came down on the wrong side of the Covington Kid’s ‘smirk’, eh?

Oh really, David? Is that your final answer? 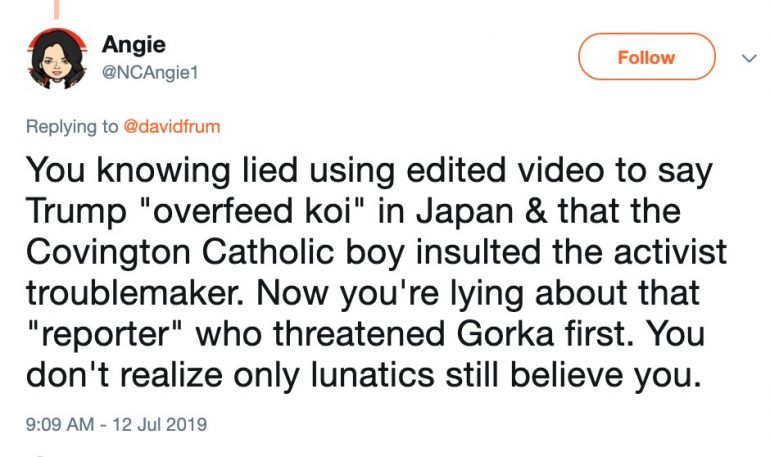 What, you didn’t think we’d forget who you REALLY are, did you David? Ok… the ‘reliable’ and ‘professional’ chattering class had their say. What does the new media have to say about the incident?

For starters.. how about the truth?

Yours truly got in on the fun holding a mirror up to little Jimmy Acosta. Mr. Gorka retweeted it.

So what does that clip show? It shows the 20 seconds leading UP to Seb Gorka putting the lippy little ‘journalist’ in his place.

Find it (and a familiar name in the reply) here:

Media guys like Acosta and Frum don't like the "Fake News" label, but this is a prime example of what many people consider to be "Fake News" — deliberately being selective in order to frame a story in a particular way.

It’s one thing to yell threats from across a crowd, trusting that authorities will step in and protect you if someone actually calls your bluff. Brian obviously didn’t know that Seb wrote a book called ‘Why We Fight’. How did Brian THINK this was going to end?

Gorka walked right up to Brian and showed him up to be the spineless weasel we all knew him to be.

He verbally abused @SarahHuckabee for 2 years.

Yesterday he insulted @realDonaldTrump’s guests in the Rose Garden.

When I said he’s not a journalist he invited me outside to fight.

Why are @Playboy and @CNN OK with the behavior of their employee? pic.twitter.com/7dBJP4lBYS

He’s like a dumb kid chucking rocks at a big dog just hoping that the rope on his collar doesn’t break. This is the kind of ‘intrepid reporter’ CNN hires to represent them in the Nation’s capital.

No wonder their ratings are so laughable.

It was like pulling the curtain back in the Wizard of Oz — Trump spoke honestly about who they are and what they do, and by doing so, he broke them.

CNN isn’t the first to pick a fight with Trump and lose — nor will they be the last.