The perpetually offended have got no sense of ‘ha-ha’. Lighten up, guys.

As far as marketing plays go, these guys swung for the fences. Was it a home run or did they strike out?

Just how ‘seriously’ are we supposed to take a team whose twitter page header looks like this, anyway? 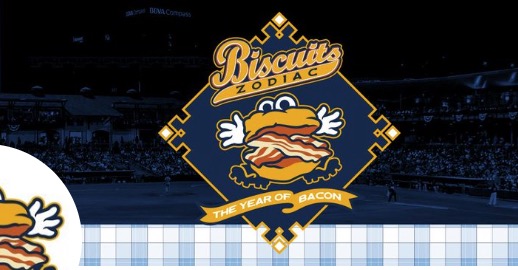 Marketers are always looking for creative ways to fill seats with people who don’t normally watch their games. There are all kinds of gimmicks.

When the Storm Area 51 story was trending, they riffed off that:

Start your Area 51 preparations early and come out to explore all of Riverwalk Stadium's secrets and mysteries!

They did ‘Christmas in July’.

We're getting a head start at the holiday season this year with Christmas in July on Saturday, July 27th. No better way to celebrate than with a Biscuits game!

A popular go-to for marketing is ‘decade’ themes, which aim to either bring in more of the demographics who don’t normally fill the seats or let the younger fans enjoy some nostalgia from a generation they only know about second-hand.

So, how do you catch the interest of the digital natives who are as likely to sit at home and stream something as they are to put down their phone and enjoy a game?

The marketers (mostly Millennials themselves) decided to play to some of the trends Millennials are known for. The ‘acid wash’, ‘bell bottoms’, or Rubix Cubes of their generation. Why wait until it’s nostalgia, right?

In an effort to bring younger fans to the ballpark, the Montgomery Biscuits are hosting “Millennial Night” this weekend, but their advertising on social media set off an eruption of mixed feedback from the very group they’re trying to attract.

The Tampa Bay Rays’ Double-A affiliate, currently with a record of 15-11, tweeted last week: “Want free things without doing much work? Well you’re in luck! Riverwalk Stadium will be millennial friendly on Saturday, July 21, with a participation ribbon giveaway just for showing up, napping and selfie stations, along with lots of avocados.”

Vice president of fan engagement, Mike Murphy, told Fox News this is just one of 70 promotions the Biscuits offer for their home games, ranging from Outdoors Night to Military Wednesdays and Autism Friendly Night.

This season marks the first full year under new management, and the team is testing out its funny bone.

“80 percent of the people in our front office are millennials, myself included, and we’re just having fun with some of the clichés that people point out about millennials,” Murphy said.

The tweet advertising Millennial Night has since gone viral, with nearly 700 retweets, 600 comments and 1,500 favorites.

Reaction was mixed. Some were offended — including some NON-Millennials who took offense on the behalf of others! Others loved it.

After the initial explosion of angry tweets, the Biscuits took to Twitter again, urging anyone who’s offended to fight their battles IRL – slang for in real life – and submit a valid complaint in person to the “Millennial Night Thinktank.”

The team itself is largely made up of millennials, none of whom, according to pitcher Benton Ross, are even remotely offended by the theme night.

After throwing the ball around with one of his teammates in the un-ignorable heat, Ross told Fox News: “If it’s insensitive, then maybe they should just have thicker skin.”
Source: FoxNews

For the ones who took offense, go ahead and stay home from the game. Maybe you should read a book, instead. May we recommend this one: