Ilhan Omar is a perpetual victim. Just ask her — she’ll tell you. No criticism of her is ever ‘legitimate’, it’s always a personal ‘attack’.

There’s a funny thing about her choice of phrase ‘personal attack’, nobody has actually attacked her.

She’s been mocked, insulted, criticized, she’s had her judgment, motives and loyalty questioned.

Welcome to the full-contact sport of politics. If you think it’s hard being a chick in politics, just imagine how tough it would be if you didn’t have a partisan media protecting your six. Or do you REALLY think those questions about immigration, taxes, marriage fraud, or asking leniency for ISIS recruits would have been downplayed by the ‘mainstream’ press if there was an (R) after your name?

She thinks she should be an object of sympathy.

But just this week, Leftist Hollywood hack Tom Arnold put out a tweet celebrating violence that hospitalized Paul right around the time a Bernie bro in a politically-motivated shooting tried to murder several Republicans at baseball practice.

The soulless ghoul loved it so much that he relived it on social media. But wasn’t the ONLY one who loved it. 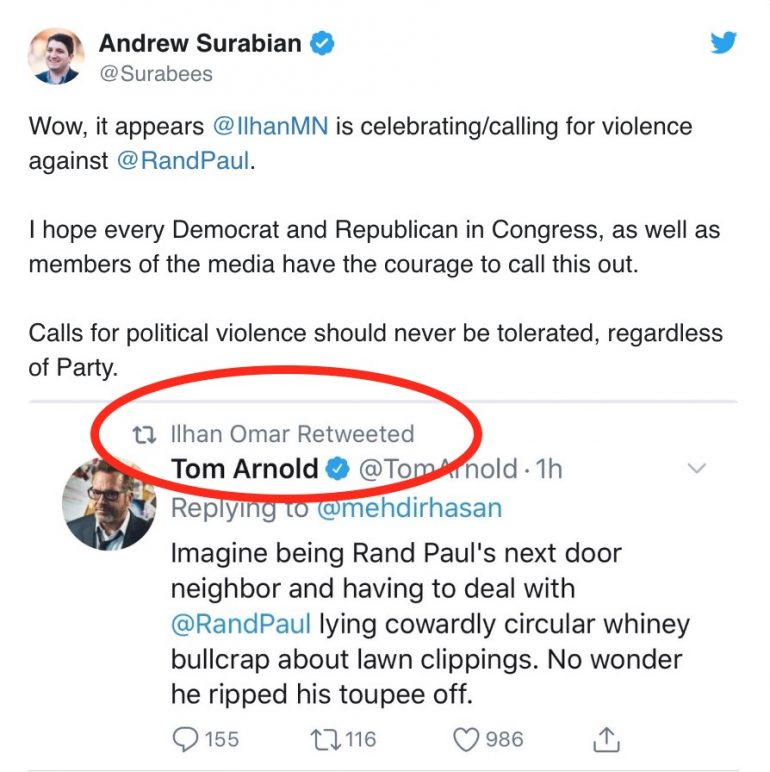 What do you suppose she was thinking as she ‘liked’ that statement Ha, ha, ha — a colleague I disagree with was almost beaten to death, isn’t that funny?

He’s just as much an elected official as she is. Would she be just as amused by someone joking about doing the same to her?

Or would she whine some more about how the overheated rhetoric is endangering her safety? Last I checked, since 2015, political violence is almost exclusively dished out against people on the Right, ranging from knocking a hat off the head to actual bullets flying at Scalise, but also at a truck that was flying the MAGA flag.k

It would be outrageous if it happened to her, but not so much if she laughs at her enemies getting hospitalized.

But she loves America and our institutions as much as, or more than, any other American, dontchaknow?

If that’s the kind of anti-American ice-water that runs through her veins, her sympathies for Al Quaeda and ISIS begin to make a little more sense. She seems just as heartless as they are, only valuing the life and well-being of people she agrees with.

That grin she made when saying ‘Al Quaeda’ or ‘Hezbollah’, though, right?