President Trump is not backing down on this for a second.

The Left and the Media(D) have called President Trump racist for admonishing House Oversight and Government Reform Committee Chair, Rep. Elijah Cummings(D-MD) for the unlivable conditions in Baltimore. Trump brought up the horrific and disgusting conditions in Baltimore after Rep. Cummings ripped into acting Homeland Security Secretary, Kevin McAleenan, about border detention facilities and detaining families who have crossed the border illegally.

A conservative independent journalist had filmed a few shots of the situation in Baltimore after Cummings performance and found that living conditions there were (in some cases) worse than at border facilities.

Trump commented on Baltimore and poof! he’s being called racist.

Well, they were going to call Trump racist anyway. It’s what they do.

In an interview with The Washington Post, President Trump said that the conditions in Baltimore are worse than those in Honduras.

The remarks came in an explosive interview with the Washington Post just hours after he dismissed accusations that his attacks on Cummings were racially motivated, insisting ‘Everybody is called a racist now.’

In his latest onslaught, Trump called Baltimore ‘about the worst case’ of inner-city violence across the country and beyond.

The Washington Examiner reported that the murder rate per 100,000 residents is higher than that of Honduras, El Salvador, and Guatemala.

The Baltimore murder rate is higher than the three Central American nations driving the border surge by migrants seeking to flee crime and murder back home.

In an analysis of the murder rates done after President Trump criticized Baltimore Rep. Elijah Cummings over the weekend, Baltimore’s was reported at 56 per 100,000. The city is on track for 340 murders.

By comparison, said the Princeton Policy Advisors analysis, the murder rate in El Salvador was 50, in Guatemala it was 22 and Honduras was 38.
Source: Washington Examiner 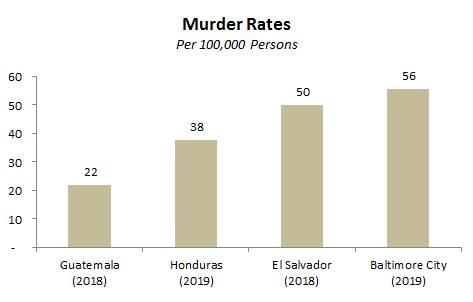 There are criticisms by the Media(D) that “conservative news sites” are “pouncing” on the statistic despite the “statistical difficulties” of comparing crime rates of countries versus an individual city.

The comparison between the city and the southern American country have previously been made by conservative news sites and commentators, despite the statistical difficulties of comparing rates of an entire country to that of a singular city.

Baltimore’s total population is around 620,000, while Honduras is home to more than nine million people.

The country saw a record of 85 per-hundred-thousand in 2011, according to the Washington Post.

Sure, comparing a single city to a nation is a problem, but isn’t it a problem that the comparison can be made? Isn’t the point of drawing the comparison to bring attention to the conditions in Baltimore and say that America can do better?

Don’t we want all Americans to feel safe in their own communities and not live in third world conditions?

ClashDaily has reported on Baltimore’s huge spike in violence all the way back in 2017.

This whole situation with President Trump criticizing Baltimore came up when Rep. Cummings attacked the condition at border facilities — facilities that Democrats have deliberately underfunded.

Meanwhile, conditions in the three Central American countries that are the source of the flood of people illegally crossing the border are actually improving.

The murder rates in Central America have fallen by roughly half since 2011 (https://t.co/ELOP5VxfIN).

Over that same time period, the number of migrants from those countries has soared. Migrants aren't coming to the US for safety, but for jobs (as they openly say when polled). https://t.co/Qwp94pfv7V

But in some parts of Baltimore, it’s been horrible for quite some time and getting worse.

A reporter was saying that President Trump should go to Baltimore and see the situation himself, but as she is speaking, a rat runs through the live shot.

A rat runs through a FOX45 Baltimore Reporter’s live shot during a story on President Trump’s tweet Baltimore is rat infestedhttps://t.co/s60inZ6TtK pic.twitter.com/R4LFxsPWeK

Baltimore’s scandal-plagued former-mayor, Catherine Pugh, went into some of the worst parts of her city and said that she could “smell the rats.”

President Trump has always said “America First” and doesn’t that include the living conditions in Democrat-run cities?

Baltimore has garbage, rats, dilapidated buildings, and crime on the rise.

San Francisco and Los Angeles have human feces on the streets. San Fran has a poop map and a “Snap Crap” app was developed to report the feces. But you can’t clean it up because — racism!

Other Democrat-run cities are turning into uninhabitable sh!tholes with a possibility of The Plage making a comeback.

But heaven forbid that the President pointed out that some Americans are living in sub-standard conditions.