How is it ‘fair game’ to harp on what Trump did forever ago, but we’re not allowed to shine a light on the wrongdoings of ‘Rev-er-und’ Al?

They try to tell us what a ‘fighter for justice’ Sharpton is. How ‘dare’ Trump call him out for his sketchy behavior. Oh puh-lease.

These are the same people who go out of their way to call Trump (and, by extension, his supporters) a ‘bigot’.

This is a real question CNN "journalist" Don Lemon asked tonight at the #DemDebate:

"What do you say to those Trump voters who prioritize the economy over the president's bigotry?"

In reality, we all know he wasn’t ‘a bigot’ until the very minute he came down that escalator with an (R) after his name and a target on his back.

Or did you think we forgot this? 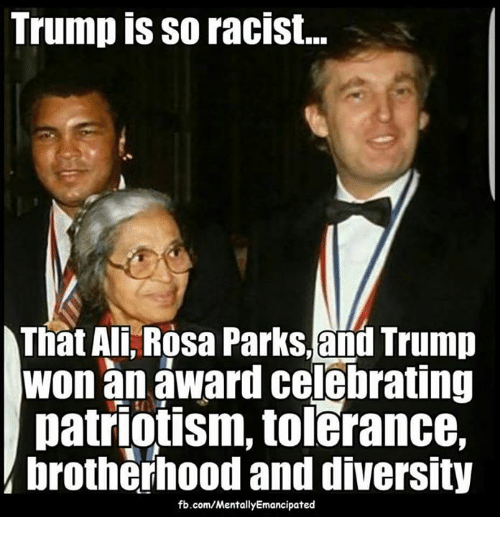 Or the various time, talent and treasure he put to various causes, financing Rand Paul’s philanthropic eye care in Haiti, provided free sanctuary for Jennifer Hudson and her family after members of her family were brutally murdered in 2008, and loaning his plane to help a Jewish family fly their sick kid across the country when his necessary medical equipment could not go along with him on commercial flights as just a few ‘for-instances’.

As Gutfeld so succinctly put it:

Trumps about to execute a white supremacist, while trying to free a black rapper from jail, as he pushes prison reform that directly benefits families of black men, while calling out a city where minorities are victims of crime & blight. if Trumps a racist, he sucks at it.

No, the Presstitutes of the Media(D) would rather talk gossip. About the Access Hollywood tape where he talked about women giving consent for some grabby behavior. (Notice how critics conspicuously leave the ‘consent’ part out and claim he assaults them.)

They’d rather draw conjectures about his past by people who have milked him for money after threatening to go public with stories about him (which may or not have ever happened, we don’t know because it never went to trial).

And now that he’s criticized SHARPTON, everyone is rushing to the defense of Rev-er-und Al for some inexplicable reason.

Do we know if he ever paid those delinquent taxes he owed? Sharpton, we mean. After all, the media is VERY interested in TAX PAYMENT stories, right?

For all the gossip masquerading as ‘news’, at no point has anything indicated Trump has had any issues with failure to pay the taxes he owed. Sharpton, on the other hand, reportedly owed MILLIONS but was STILL an invited guest at the White House.

Why has SHARPTON gotten a pass over his own shady history?

At a funeral for the boy who had been run over, Sharpton said, “The world will tell us he was killed by accident. Yes, it was a social accident. … It’s an accident to allow an apartheid ambulance service in the middle of Crown Heights. … Talk about how Oppenheimer in South Africa sends diamonds straight to Tel Aviv and deals with the diamond merchants right here in Crown Heights.” For those unfamiliar, “diamond merchants” was a thinly-veiled reference to Jewish jewelers.
Source: WashingtonExaminer

Obama says U.S. "not as divided as some have suggested." Like BFF Rev Al, saying if "Jews want to get it on… pin your yarmulkes back…"

What about that time he defamed a dead cop and an innocent lawyer in the ENTIRELY bogus rape claim of Tawana Brawley?

What about this incident?

About four years after the Crown Heights affair, in 1995, Al Sharpton through his National Action Network, injected himself in a landlord-tenant dispute in Harlem, which soon turned deadly. As recounted in Fred Siegel’s book Prince of the City, a black Pentecostal church raised the rent of its Jewish tenant, who owned the store Freddy’s Fashion Mart, so the Jewish owner in turn raised the rent on his black sub-tenant, who ran a record store. Sharpton immediately saw an opening for racial demagoguery, and went on radio, declaring, “We will not stand by and allow them to move this brother so that some white interloper can expand his business on 125th Street.” His underling, Morris Powell, vowed, “This street will burn. We are going to see to it that this cracker suffers.”
Source: WashingtonExaminer

We’re supposed to think the ‘Reverand’ Al Sharpton is a good and just man railing against the ‘wicked’ Donald Trump. Seriously?

We’re not buying what they’re selling.

Not for one second.

Trump is not the villain the PartisanPress tells us he is. And Sharpton is not the hero they claim, either.

If there were no R’s or D’s after their names, the press would admit that. But they are more loyal to their political agenda than they are to the facts.

Which is EXACTLY why they have lost the respect of the public, as seen in their ratings.