Fair Warning: showing even a glimmer of patriotism now lands you in the outrage mob’s crosshairs.

Anything not Left of Stalin gets labeled ‘Far-Right’ and ‘extreme’ these days.

Even former The Young Turks personality Dave Rubin and free-speech supporting (yet Democrat endorsing) reporter Tim Pool get that tag.

Evidence is not required. And judgment against the guilty is swift and certain.

It was tweeted out by a writer for ‘Vulture’.

Have you seen it yet? Can you even handle such a monstrous outrage? He’s wearing a shirt with… get this… the Stars and Stripes.

But that’s not even the worst of it. Old Glory has something else superimposed over it.

The Gadsden Flag snake. You know — ‘Don’t Tread On Me’?

See for yourself. (If you dare!)

How did Yahoo News ‘report’ it?

First, they reminded their readers they’re supposed to hate what it stands for by invoking some charged language…

Although it is one of the symbols and flags used by the U.S. Men’s Soccer Team, Metallica, as well as some libertarian groups, over the years the flag has been adopted by Far Right political groups like the Tea Party, as well as gun-toting supporters of the Second Amendment.

It has therefore become a symbol of more conservative and far right individuals and, according to the Equal Employment Opportunity Commission of the US, it also is “sometimes interpreted to convey racially-tinged messages in some contexts.”
Source: Yahoo

How nice of ‘impartial’ Yahoo to assume their readers need such ‘pre-chewed’ news. At least here at ClashDaily, we’ve nailed our colors to the mast and don’t pretend to be ‘impartial’ like these so-called news sites.

Love it or hate it, you often hear what we think about an issue while we are describing what’s going on in the wide, wide world. It’s right there in our ‘about us’ page.

Even TMZ had the honesty not to unfairly tag Pratt as a racist without evidence:

Our take … Chris wearing the shirt doesn’t mean he supports white supremacy or anything else hateful or extreme, for that matter. He is, however, known as a conservative guy, and that’s all there is to it.
Source: TMZ

But if you love small government, low taxes, and the freedom to defend your family from a threat even if the police can’t get there in time, that makes you a ‘bad person’. You might even be (*gasp*) one of those people who just wants the government to ‘leave you the hell alone’!

Not so long ago, that made you a ‘patriot’. See how the media is willfully dragging the country’s opinions Left while pretending they don’t?

Where did their story go next?

They COULD have cited one of the many people that ‘loved’ the shirt and wanted to know where to buy one. (There were quite a few.)

They COULD have gone to one of the snarky replies mocking the idea that it was somehow ‘racist’.

But, naturally, that’s NOT where they went.

Instead, they brought up three accounts showing they were ‘offended’ by the shirt.

One of them, with a grand total of (currently) 596 followers, was cited as saying: 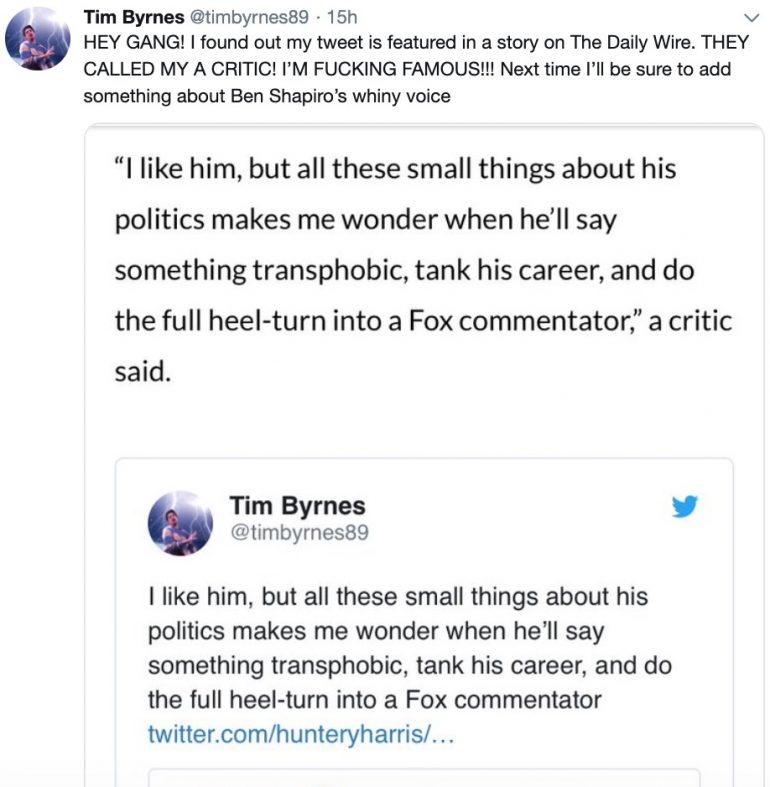 As you know, his opinion should be taken super-seriously because he also wrote:

Who ELSE did they feature? They posted this tweet: 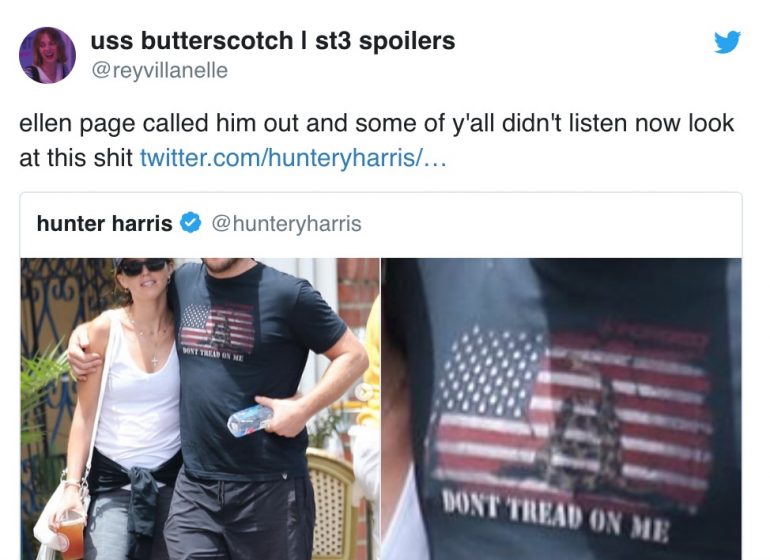 With a whopping 163 followers, her bio describes her as: 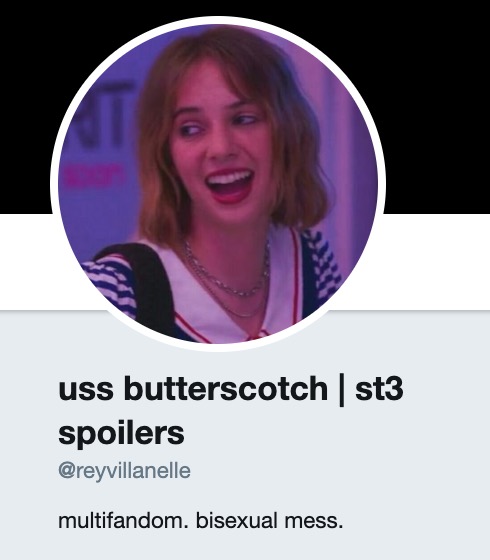 And the super-important deep thoughts in her pinned tweet:

The other critical tweet they cited goes by the Twitter handle “Aerola Grande”. That’s probably ‘Nuff said right there.

Meanwhile, Jonah Goldeberg, with more than 300K followers (and a NeverTrumper, we might add) tweeted this to someone who shared the same outrage over the t-shirt. (She since deleted the tweet.) 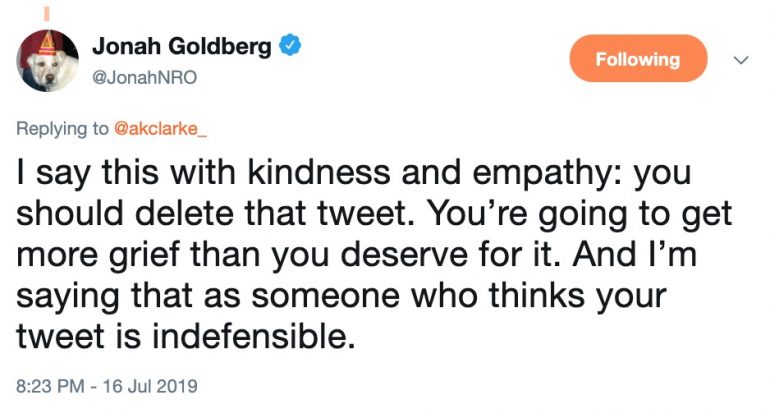 Funny how none of the large verified accounts that were NOT blindly critical of Pratt’s shirt made it into the reporting.

Love it or hate it. That’s your choice.

But ‘news’ agencies telling you what PEOPLE you should like or hate because they DARED to wear a pro-American patriotic outfit?

That seems like it’s a bubble off level, dontcha think?

After all, we don’t see them condemning the CHE shirts, and that guy was a monster who defied all sorts of the Left’s ‘woke’ sensibilities.