This may very well be the WEIRDEST video of Leftist protesters that you have EVER seen.

I know what you’re thinking… that’s a pretty hard sell.

There was Miley Cyrus crying when the results of the election came in:

There was the Inauguration Day scream:

There was the video of the Anti-Trump Zombie.

Even the RNC created a compilation of how nutty leftists have become in the Trump era.

But this is beyond that.

It’s behavior that is can be labeled beyond a shadow of a doubt as certifiable.

A rational patriot, Ashley St.Clair, goes to an ICE facility in Aurora where the American flag was replaced by a Mexican flag and asked the handful of activists there, and… Whoa, Nelly! It was weird right from the get-go.

These “protesters” don’t really talk about the flag — but come out swinging by calling St. Clair a “white supremacist” and shouting her down.

Shockingly, it goes downhill from there.

At one point, while shouting “f**k the troops!” she climbs up the pole and humps the post.

Meanwhile, one fellow tries to get her to calm down, one purple-haired lispy guy says, “F**k the troops” and insists that “optics don’t matter”, and someone in a purple dress who appears to be 2019 leftism in human form films the entire episode.

Go ahead and tell me I’m wrong. 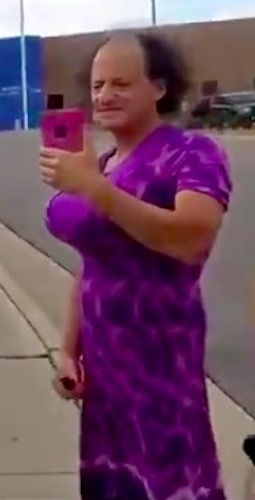 I’m not sure, but remember, all people are made in God’s image and should be treated with dignity and respect, even if they don’t appear to have any.

The claims that the military is only there to “fight for oil” dismisses the entire Reagan and Trump doctrine of “Peace through Strength.”

Actually, the idea that a strong military leads to peace is one that was lauded by George Washington in the 1793 State of the Union Address as well as advocated for by Alexander Hamilton in Federalist Papers 24.

But I’m guessing these clowns don’t know that.

I went to the Aurora ICE facility where deranged leftists took down the U.S flag & raised a Mexican flag in its place

These lunatics called me a white supremacist simply for supporting our flag and our troops. VC: @DC_Draino pic.twitter.com/M284ygkXl7

This is political discourse in 2019.

May God have mercy on us all.