Is this “travel advisory” reaching the thousands of people crossing illegally from the Mexican border?

Not really. Their end-game is gun control.

The advisory was issued on Wednesday and warned travelers to the United States to “exercise extreme caution due to rampant gun violence which has become so prevalent in the US that it amounts to a human rights crisis.”

Amnesty International today issued a travel warning calling for travelers and visitors to the United States to exercise extreme caution due to rampant gun violence, which has become so prevalent in the US that it amounts to a human rights crisis. https://t.co/bsVsiBOO5K pic.twitter.com/CVWEyVzR3c

Under international human rights law, the United States has an obligation to enact a range of measures at the federal, state, and local levels to regulate access to firearms and to protect the rights of people to live and move freely without the threat of gun violence. The government has not take sufficient steps to meet this obligation.

Amnesty International isn’t the only one, though.

In the aftermath of both shootings, multiple foreign nations have issued similar travel advisories to citizens who may be traveling to the U.S.

Uruguay told its citizens to exercise extreme caution “against growing indiscriminate violence, mostly for hate crimes … which cost more than 250 people their lives in the first seven months of the year.” The Consulate General of Japan in Detroit warned Japanese residents to “be aware of the potential for gunfire incidents everywhere in the United States,” which it described as a “gun society.”

Venezuelan President Nicolás Maduro also warned citizens “living in or aiming to travel to the U.S., to be extra careful or to postpone their travel, given the recent proliferation of violent acts and hate crimes.”

So, thanks, Amnesty International, for telling all those illegal border crossers that you agree with President Trump about the dangers in some (Democrat-run) urban centers.

We find Lankford’s data represent a gross undercount of foreign attacks. Our list contains 1,448 attacks and at least 3,081 shooters outside the United States over just the last 15 years of the period that Lankford examined. We find at least fifteen times more mass public shooters than Lankford in less than a third the number of years…By our count, the US makes up less than 1.43% of the mass public shooters, 2.11% of their murders, and 2.88% of their attacks. All these are much less than the US’s 4.6% share of the world population. Attacks in the US are not only less frequent than other countries, they are also much less deadly on average.
Source: Bongino

Great work there, CNN and Partisan Press — in trying to swing the election against Trump and perpetuating a ‘crisis’ around phantom violent white racists roaming the land looking for Smollett-style victims to rough up or kill, you’re tarnishing our international reputation. As though there weren’t enough tin-pot dictators with an ax to grind against us.

Speaking of tin-pot dictators, fortunately for Maduro, Venezuelan citizens are far too busy fleeing the country, or avoiding starvation, trying to survive the consumption of whatever unsanitary water they can find, and trying not to be killed by their own jackboot government thugs to spend much time online. Otherwise, they may have discovered just how dishonest his Soviet-style public denunciation of America really is. 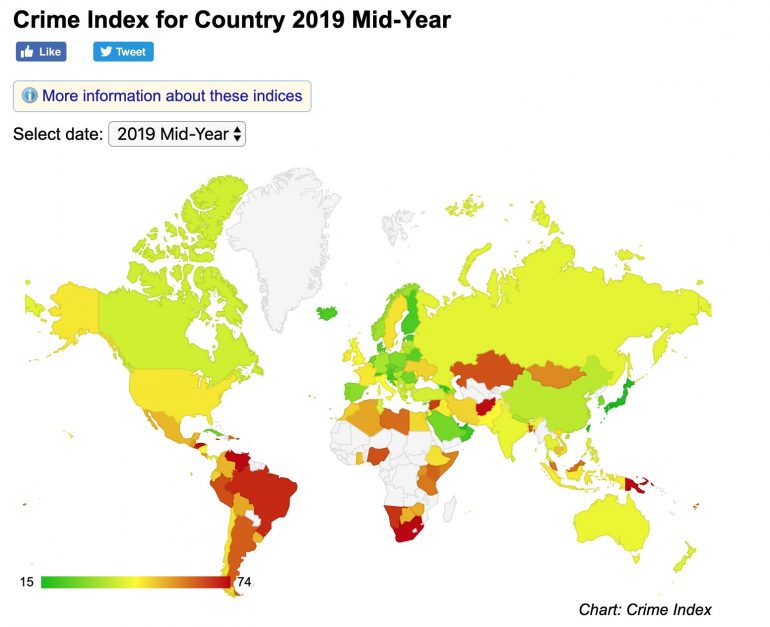 Even allowing for the impact of various cities in the US where runaway crime is a serious problem (Baltimore, Chicago and several others) that skew the national numbers, USA tops out at 49 on this list.

Does this mean Amnesty International will be giving out warnings about the other 48 countries above it? Of course not.

This nothing more than a crass political statement by a politically skewed group.

What’s the intended takeaway message? The same as it always is: ‘The West Sucks, especially America’.

If we suck so badly, you can stop begging for Greenbacks to fund your globalist fever dreams.