Somewhere out there, Steve Harvey just breathed a sigh of relief, hoping his awards screw-up will no longer be the one people think of first.

John Travolta channeled his inner Biden when he was handing out MTV’s VMA awards. It isn’t the first time he’s blown it, either. Five years ago, at the Oscars, he botched his introduction of Idina Menzel as the ‘wickedly talented Adele Dazeem’.

That was a small-time screw up by comparison. This time, he managed to screw up Taylor Swift’s big moment… by confusing her with a Drag Queen.

He and Queen Latifa were handing out the prize for her song ‘You Need To Calm Down’. Latifa did the announcing and Travolta was to hand her the trophy. Pretty simple, right?

You’d think so. But he found a way to mess it up. Taylor Swift, after her name was announced, did the usual quick ‘stop-to-hug-the-ones-she-came-with’ before stepping up to the stage.

Travolta looked around, and handed the trophy to someone who looked a little like Swift. After all, drag queen Jade Jolie is the same person who played Swift in her video. Of course, Jade Jolie is also an alumnus of Ru Paul’s Drag Race.

But seriously, bro, are you BLIND?

Here he is passing the award to the wrong person: 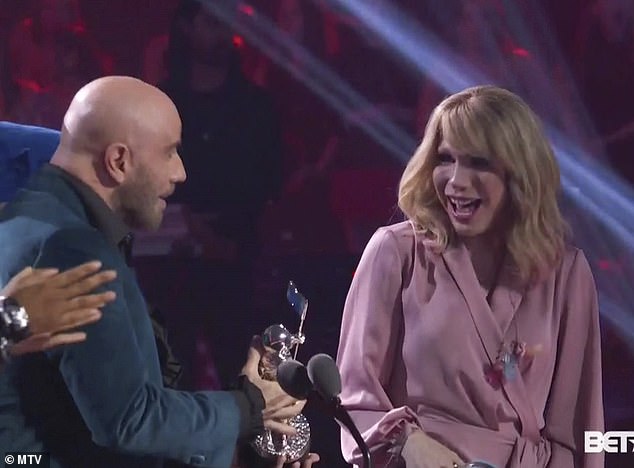 Did they eventually get it sorted out? Yes. Travolta realized his mistake after seeing the awkward reaction of the person he tried to hand it to.

Swift has a way of finding her way into the news cycle… here are some other times she’s popped up: