Since the Media(D) loves throwing around defamatory insults so freely, this ruling should have their lawyers sweating like a narc at a biker rally.

In case they had started breathing more easily after one of the Covington kid defamation cases was thrown out, this case came along to make them worry again.

Free speech does NOT mean newspapers are exempt from libel laws.

And isn’t the timing of this case fascinating?
It’s handed down at a time when the Covington kids still have cases pending and talking heads (and politicians) are spreading defamatory accusations faster than Herpes at Coachella.

Are they getting nervous? Maybe they should be.

In the context of the 2017 Scalia shooting, a New York Times editorialist felt a need to tie that violence to a long-since debunked claim that Sarah Palin’s PAC was responsible for the 2011 shooting of Gabrielle Giffords. (We’ll leave our readers to guess the motivation for such an inclusion.)

NYT later issued a retraction, but the damage was done, and Sarah wasn’t satisfied that was enough considering the heinous nature of the claim.

Many of you will remember the case, but for those who missed it or have forgotten, Sarah Palin was campaigning with the Tea Party to help Republicans flip some seats they saw as winnable.

When Gabrielle (“Gabby”) Giffords was shot at an event, Left-leaning ‘journalists’ did the same thing they’re doing now. They worked backward from their assumptions (in this case that assumption is ‘it’s the Republicans fault’) looking for a way to point a finger at the Right.

This is the literature: 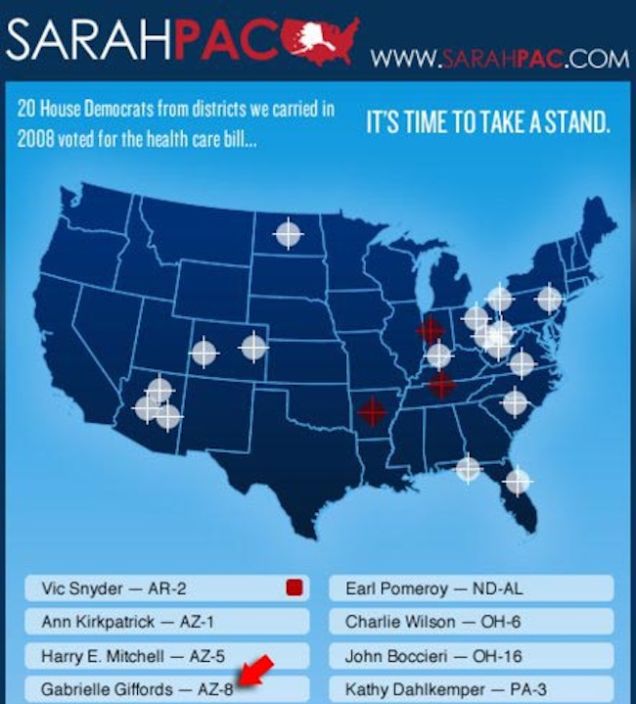 For context, the claim that she had anything to do with it has been widely debunked.

And here is what the courts said:

Walker continues, “It is clear to us that the district court viewed the hearing as a way to more expeditiously decide whether Palin had a viable way to establish actual malice. But, despite the flexibility that is accorded district courts to streamline proceedings and manage their calendars, district courts are not free to bypass rules of procedure that are carefully calibrated to ensure fair process to both sides.”

In the opinion (read here), Walker then analyzes Palin’s proposed amended complaint as well as the paper’s contention that the only plausible conclusion was that Bennet made a mistake that could not rise to actual malice.

The appellate court disagrees with the NYT and nods to Palin’s allegations that Bennet, whose brother is a Senator from Colorado (and is currently running for president), would be more likely than the average editor to know the truth of the shooting because he had reason to be personally hostile to Palin, her party, and her pro-gun position.

“The district court gave no weight to these allegations, finding that political opposition did not rise to the level of actual malice,” continues the opinion. “We agree with the district court that political opposition alone does not constitute actual malice, but we conclude that these allegations could indicate more than sheer political bias—they arguably show that Bennet had a personal connection to a potential shooting that animated his hostility to pro‐gun positions at the time of the Loughner shooting in 2011. Palin’s allegations are relevant to the credibility of Bennet’s testimony that he was unaware of facts published on his watch relating to the Loughner shooting and that he made a mistake when he connected Palin to the that shooting. Palin’s allegations present a plausible inference that Bennet’s claim of memory loss is untrue.”
Source: Hollywood Reporter

Looks like the NYT will have to make their case before a judge, rather than having it simply dismissed — and more importantly, the injured party gets to have her day in court, too.

Isn’t that the whole point of the process after all?