Can you imagine if a Republican had done this? It would spark a month-long news cycle.

But it’s just a blip on the radar because the targets are Trump supporters.

Rep. Joaquin Castro(D-TX) is the twin brother and campaign manager for Democrat hopeful Julián Castro(D-TX). Julián Castro is currently at around 1% according to the latest Quinnipiac poll. Congressman Castro thought it was a good idea to list Trump supporters in the San Antonio area along with their employers and businesses.

Congressman Castro has grown a beard to distinguish himself from his identical twin brother who is running to be the Democrat Nominee. This isn’t the first time that sort of thing has been done. 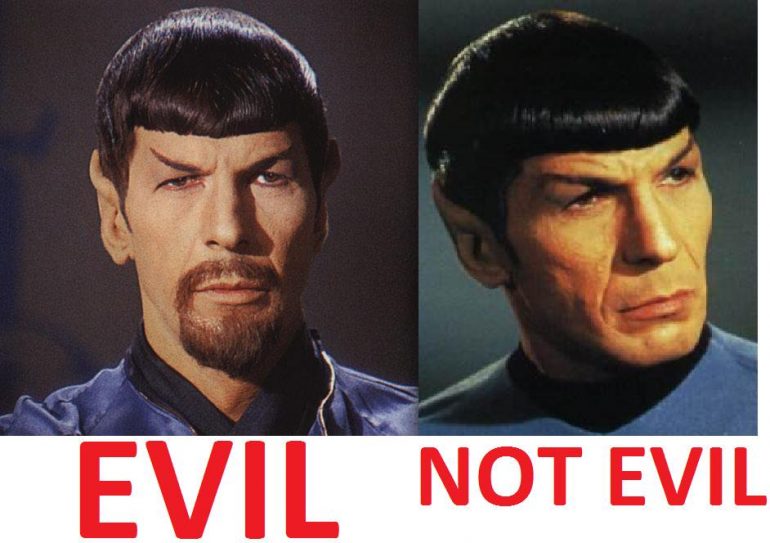 (It’s just an example, don’t read too much into it, guys. They’re both pretty horrible when they decide to stand on the graves of the victims of the El Paso shooting to attack the President.)

Here is Rep. Castro on MSNBC Monday ratcheting up the political rhetoric in the wake of the El Paso shooting and (surprise) blaming President Trump.

The El Paso terrorist manifesto included language that is eerily similar to the language the President has used to dehumanize and demonize Hispanic immigrants in this country.

That violence just spilled over. pic.twitter.com/9PFIF8D0Fy

He said, “This presidency has been a cancer on the country. This president has put a target on the backs of vulnerable community.”

"This presidency has been a cancer on this country. This president has put a target on the backs of vulnerable communities. Not just the Latino community, but the black community … the Muslim community, the LGBTQ community."@JoaquinCastrotx on Trump. #Hardball pic.twitter.com/RbZ2Bn1UQf

But not as disgusting as publishing the names of Trump donors.

That is absolutely vile.

Here is the tweet that is still up on Twitter because this doesn’t count as doxxing, apparently.

Sad to see so many San Antonians as 2019 maximum donors to Donald Trump — the owner of ⁦@BillMillerBarBQ⁩, owner of the ⁦@HistoricPearl, realtor Phyllis Browning, etc⁩.

Their contributions are fueling a campaign of hate that labels Hispanic immigrants as ‘invaders.’ pic.twitter.com/YT85IBF19u

Screenshot for posterity in case Rep. Castro finds some shame or Twitter finds some stones. (ClashDaily has made the editorial decision to not include the names of individuals or businesses listed for their safety. However, if you would like to support those businesses that have donated to President Trump, the information is currently available on Rep. Castro’s Twitter account.) 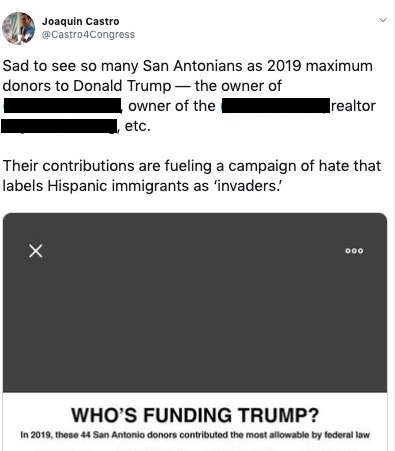 Rep. Castro is defending his list because “the information is publicly available” and he didn’t intend for individuals or businesses to be targeted or harassed.

This is disgusting. Inciting violence against private citizens for participating in our Democracy is beyond the pale. Your rabid hatred of @realDonaldTrump has made you deranged. https://t.co/vwj9a6EDiT

Democrats like Julian Castro and Joaquin Castro think that people who cross into our country illegally should face zero consequences, but American citizens who donate to a political candidate they don't like should have their livelihoods destroyed.https://t.co/5t7NqeDbfD

1. Joaquin Castro publicly naming and shaming Trump donors is way out of bounds.

2. How about we not quote-tweet him doing it, thereby virally spreading his efforts?

This is dangerous, reckless, and has to stop. Freedom of speech should never be threatened for political gains, and no American should be targeted for their beliefs.https://t.co/kz3seQytR9

Also remember: Obama did it first, in 2012. https://t.co/zDXHHubVMT

Not just Republicans, though. Some who aren’t on the right but are quite active on social media are calling the move dangerous.

2. Thanks to the people lecturing me about what's a public record or not. i may be dumb but i'm not stupid. Activists can do what they wish, as much as i may disagree, but this is not appropriate targeting for a member of congress.

But, Castro has his supporters, too.

If Trump published the names & employers of donors of his political opponents, it would be headlines on WaPo, NYT, CNN and MSNBC for at least a month and he'd be called a fascist dictator who rules with fear and bullying.

When Joaquin Castro does it, the left thinks it's great.

Foulmouthed “Squad” member, Rep. Rashida Tlaib(D-MI) has voiced her support which is awkward considering who some of her (rather vocal) supporters are.

Chairman Castro, They don't like it when you name their donors. The public needs to know who funds racism. https://t.co/7qfg1RT79y

The left is now attacking the right for complaining about a list of people’s names, employers, and businesses publicly posted by a politician because those voters in his district have donated to a political campaign that he opposes.

Sawyer Hackett, the Julián Castro campaign’s national press secretary, said in a statement, “Trump and his right wing enablers whine about publicly available information being released because they want to distract from his role in fueling the kind of racism, bigotry, and white nationalism that we saw in El Paso this weekend. It’s pathetic.”

Under federal law, campaigns must collect and report the names, addresses and employers of all people who donate $200 or more to their campaign. Donors can give $2,800 to a candidate per election cycle.

No one was targeted or harassed in my post. You know that. All that info is routinely published.

You’re trying to distract from the racism that has overtaken the GOP and the fact that President Trump spends donor money on thousands of ads about Hispanics “invading” America. 1/2 https://t.co/TwUDC4m5tO

Donald Trump has put a target on the back of millions. And you’re too cowardly or agreeable to say anything about it.

How about I stop mentioning Trump’s public campaign donors and he stops using their money for ads that fuel hate?

I won’t dox people as @JoaquinCastrotx did, but can confirm that his target list omitted Latino donors in San Antonio for Trump.

This means that Castro specifically singled out donors for their race, in violation of federal hate crime laws.

Joaquin Castro is right. The small donors he tagged are actively engaged in a campaign of racism and white suprem – Oh pic.twitter.com/B4cHrtRb2Z

And Rep. Castro is doubling-down. He doesn’t seem to care that he has now (to use his language) “put a target on the backs” of Trump donors and left them to be harassed and have their livelihoods destroyed by the vindictive #Resist crowd. We’ve seen what they can be like. Just look at what they were doing in front of Senate Majority Leader Mitch McConnell’s house as the polio survivor recovers from a broken shoulder. They’re awful.

Joaquin Castro is shamelessly defending the “target list” of @realDonaldTrump’s supporters that he tweeted.

Not only is Castro a sitting Dem Congressman, he’s the chair of Congressional Hispanic Caucus.

Oh, and by the way, Rep. Joaquin Castro has a tweet that didn’t age well…

Thanks @Menendez4Texas for passing "David's Law" to combat cyber bullying in TX. It will help prevent harassment and save lives. #DavidsLaw https://t.co/nTmLzLnrZ8

He might want to rethink his stance on cyberbullying.