Trump claims his Media(D) critics are SO committed to ousting him in 2020 that they’re actually CHEERING for us to get thrashed economically.

Not that they need be concerned that it would hurt any of them, or get any of them thrown out of their lovely gated communities.

Nah, the recession THEY are cheering for would hurt ‘those’ poor suckers in ‘flyover’ country and red states.

And, truth be told, they would like nothing better than to see ‘those bastards’ suffer for sending Trump to the White House in the first place.

The President called them out for it in his tweets this week: 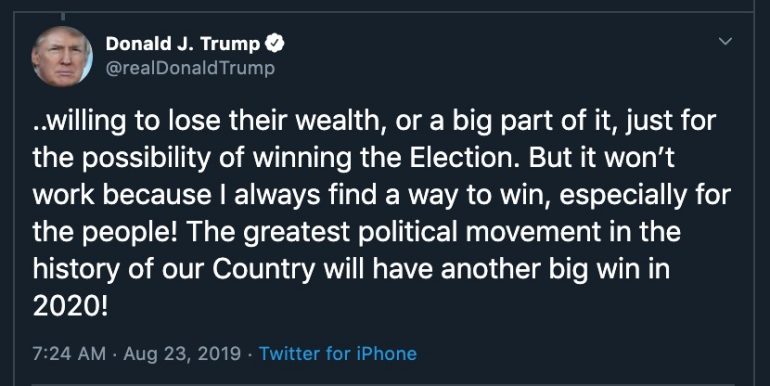 Here’s a ‘supercut’ of the usual talking heads who ‘don’t want a recession’ getting pretty amped up about the possibility of exactly that… and (*gasp!*) do ya think it might have any chance hurting Trump’s 2020 chances?

Imagine being so driven by hate that you actually want the NATION to fail?

When Rush Limbaugh said what the rest of us were thinking about wanting Obama to fail, we meant that his policy would jam a stick in the spokes of our economy, and we hoped that he would stumble his way into being a BETTER president than what his policies offered to slap the rest of us around with in ‘transforming’ the nation.

Sadly, he succeeded in implementing the things he promised.

Democrats, on the other hand, don’t really seem to care WHAT has to happen to ‘the little guy’ in the blue-collar job, so long as they can get the Democrats back into positions of power.