A billboard advertisement for a gun store sparked so much online outrage that it is being removed.

On Sunday, July 29, Cherokee Guns in Murphy, North Carolina, posted images of the billboard on their Facebook page. The billboard included the Congressional photos of the four women known as “The Squad”; Ilhan Omar(D-MN), Alexandria Ocasio-Cortez(D-NY), Rashida Tlaib(D-MI), and Ayanna Pressley(D-MA), along with the words, “The 4 Horsemen are Idiots Signed, the Deplorables” and directing customers to Cherokee Guns. 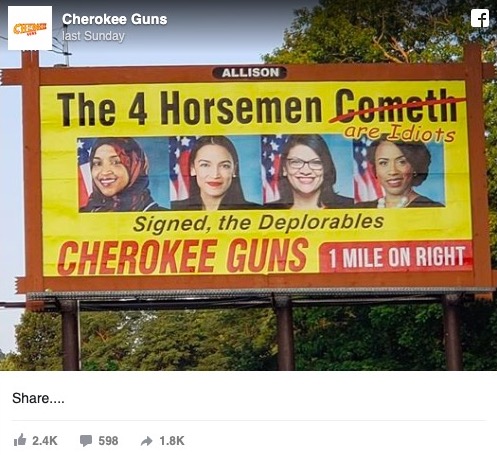 They posted a follow-up on Monday advertising a giveaway of limited-edition free stickers of the billboard image.

Cherokee Guns did this because of customer demand. 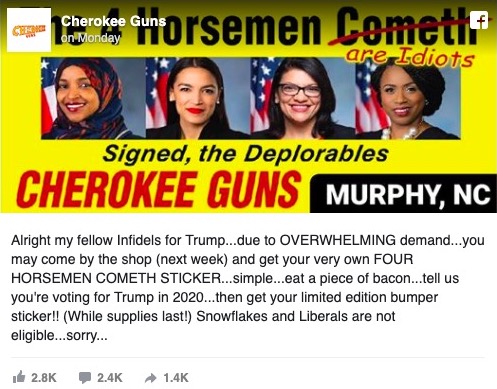 Taking a scroll through the Cherokee Guns page, it seems that all of their advertisements that they post images of are political. One of the salesmen for the billboard company also said that many of the previous advertisements had a particular political tilt.

Maybe it’s just a form of guerrilla marketing to get attention, but the owner, Doc Wacholz, is clear that he’s not a fan of anyone wanting to make America into a socialist country.

Here are some of the Cherokee Guns ads: 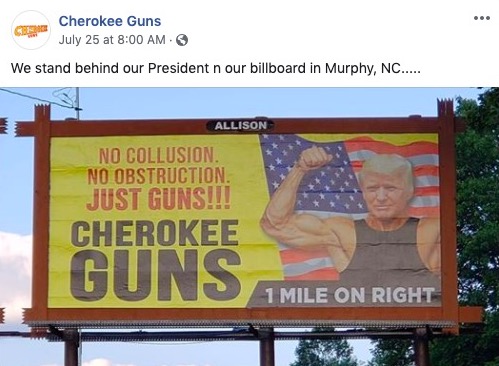 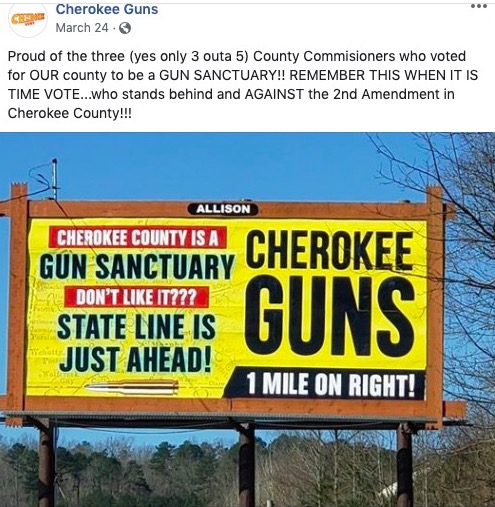 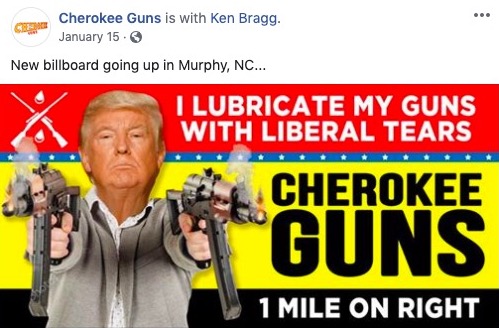 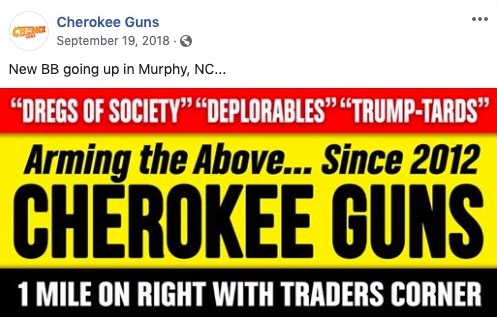 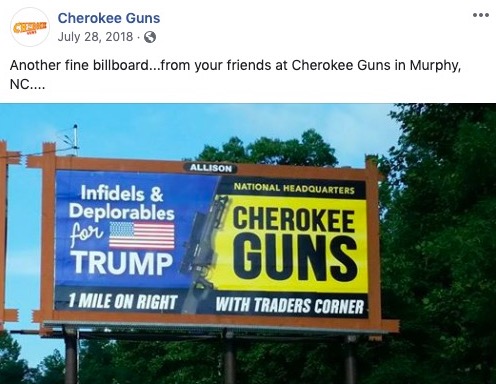 Even one that featured Santa Claus wasn’t immune. 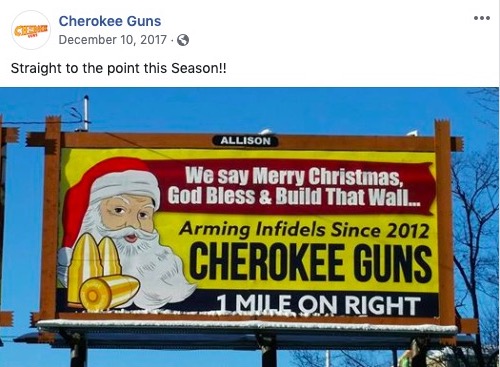 So, why was the latest one targeting “The Squad” so outrageous?

The subjects were Democrat “women of color.”

Wacholz said that he doesn’t care what color they are, his critique is solely about their political views.

The store’s owner, Doc Wacholz, said that he chose the women because of their “their message of turning this country into a socialist country,” he told CNN affiliate WTVC…

…”I don’t care if it was four white women or four white guys that had their view — they’d be on the billboard,” he said.

A group called Coalition to Stop Gun Violence, a 501(c)(4), said that the billboard was, “disgusting anti-government violent rhetoric” and constituted “threats against members of Congress.” 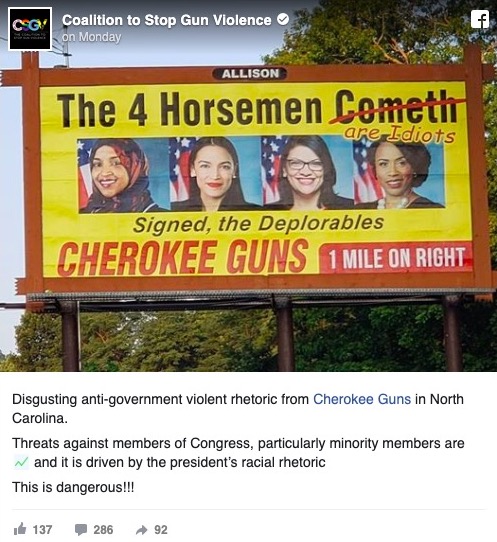 One of the Squad, Rashida Tlaib, asked, “How the hell is this not inciting violence?”

How the hell is this not inciting violence? https://t.co/rgdDloiePq

Perhaps it’s just me, but I don’t see it.

The issue is that the image included the ad for a gun store — which was the purpose of the ad. If it just read, “The 4 Horsemen are Idiots Signed, the Deplorables” that couldn’t be considered violence, could it? If it were, say, an advertisement for a pet supply store, would it be considered violence?  The problem, it seems, is that the gun store included the word “gun” in the advertisement directing customers to their gun store.

Also, it’s difficult to take seriously a woman that has defended Hamas firing 700 rockets at Israel, been rather cozy with some folks that are apologists for terrorists, and has written for the blog run by notorious anti-Semite, Louis Farrakhan.

Oh, and she’s also been tossed out of a Trump rally for her protest antics and called Trump supporters “crazy.”

Tlaib had “inciting violence” explained to her on Twitter.

Ayanna Pressley, who refuses to acknowledge the President of the United States as the President, also had to weigh in. To her, this was BLATANT RACISM! She wrote, “#Racist rhetoric from the occupant of the @WhiteHouse has made hate our new normal. We are still vulnerable. @RepMarkMeadows – Cherokee Guns is in your district & you and I serve on a committee together. Here’s your chance to finally do the right thing.”

#Racist rhetoric from the occupant of the @WhiteHouse has made hate our new normal. We are still vulnerable. @RepMarkMeadows – Cherokee Guns is in your district & you and I serve on a committee together. Here’s your chance to finally do the right thing. https://t.co/IvR1eunFQt

But demanding that people who don’t fit into her pre-defined identity boxes is somehow not racist.

According to Ayanna Pressley, I’m just a “token” and not really a brown woman because I don’t like her hyper-progressive policies that reduce people to tribal groups based on their skin color, gender, or sexuality. That is “racist AF” as the kids say.

Remember who she is a racist bigot who insists that you must conform to her worldview or else you’re “not welcome at the table.”

She was also called out on Twitter to condemn the Antifa attack on the ICE facility, which she has refused to do.

When will you condemn the Antifa terrorist attack? https://t.co/QXRkGlyrd3

But now, fueled by outrage, the Cherokee Guns billboard is coming down.

The billboard is being removed and another has already been designed, according to Danny Coleman, a salesman for the billboard company Allison Outdoor Advertising.

Wacholz changes the signs at that particular billboard about every three weeks, and the most recent had only been up since Tuesday, Coleman said…

…”It broke our hearts that the controversy happened. Freedom of speech is a right. Unless it is something illegal or offensive, we use our best judgment and let it go. It is tragic what happened. He has been a great client of ours for a while, he just has his beliefs,” Coleman said.

“I wish it hadn’t happened,” Coleman said. “I didn’t want to hurt anybody. … I hope that we can heal from it and people can forgive.”
Source: CNN

These four Congresswomen have tried very hard to get some attention, and it’s worked. Unfortunately, they don’t seem to like to be criticized much. They only want good press. Yeah, that’s not how it works when you’re a public figure.

The Cherokee Guns billboard is being taken down because these women can’t handle criticism of their ideas, so they play the race card and hide behind their victim status. It’s gross.

After seeing what Cherokee Guns does with their billboards, I’m really hoping that Elizabeth Warren is somewhere on that Democrat ticket for 2020, because if she is, that billboard is going to be *chef’s kiss* per-fec-tion!