Yet another Saturday where the streets were not safe for the ordinary citizen, or anyone displaying a patriotic symbol.

The anarchists posing as ‘antifascists’ were out in force again, with their masks, mace and assortment of weapons.

And still, these guys claim to be the defenders of the American way: 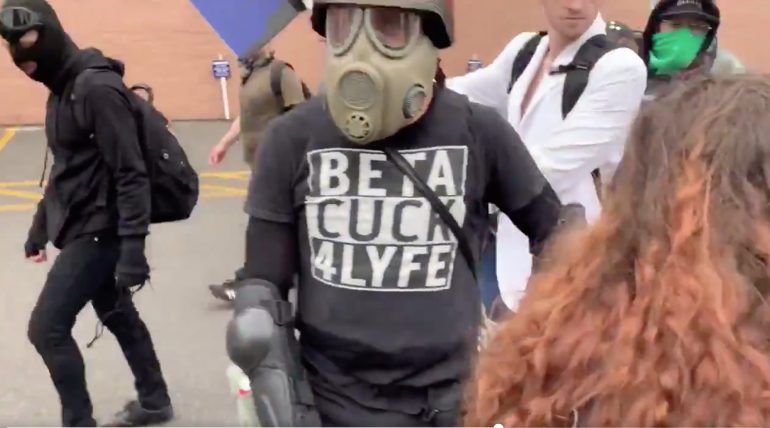 Here’s what the officials had to say about the protests:

Mayor Wheeler was very pleased that having the police out in force was able to stop the violence. He said so in a press conference.

Wheeler says it's humbling to see how everyone came together to prevent violence at demonstrations in Portland. https://t.co/Uzi2zNsF90

And here’s what the ‘boots on the ground’ reporting showed us:

UPDATED story: More assaults by Antifa. The Portland police have declared a civil disturbance and attempted to enforce an order to disperse, but were unsuccessful and had to retreat.#PortlandProtest https://t.co/RvMQvCmuui

Portland police appear to be retreating or leaving. #PortlandProtests pic.twitter.com/m6Hc4RngEL

Antifa and allies have taken over the whole intersection of SW Park Ave & SW Yamhill St.

Mob started hitting the buses when they saw who was inside. Some masked people opened a case that contained rocks or cement, which they used as projectiles. When the bus door was opened, one man inside used a hammer to fight back but it was stolen & hurled inside at one of them. https://t.co/KdwlqzHmDz pic.twitter.com/sbDwb51GOI

Attacking as ‘nazis’ innocent tourists who got swept up in the confusion, attacked, pepper-sprayed and egged:

I spoke with a journalist who interviewed this man after police finally intervened to help. He says he is just a visitor passing through & stopped to take pictures. He doesn’t know why the mob started to push him out, pepper spray & then egg him. https://t.co/gczXedDfVV

Wolfpack tactics used against a man and an adult woman so petite she was mistakenly described as a juvenile who got separated from the group, surrounded and attacked with makeshift weapons:

Alternate angle shows the man in the "Sparta" costume and the female being surrounded & chased. One of the people charge after them with a glass bottle in-hand. https://t.co/CWYuaojQod pic.twitter.com/JZ6uXYd1Nw

A large antifa mob chase & attack a man & a young girl who got separated from the others. No police. #PortlandProtests pic.twitter.com/erceCRVnad

He came up to me again and people again surrounded me. He said I get hurt then that was on me. Police came back said I was provoking them by being there. pic.twitter.com/yHTx34CU50

Reporter gets surrounded by Antifa, but HE is the one who ‘has to leave’.

Police withdraw from protecting Conservative group, depsite an ‘all hands on deck’ attitude to these protest:

The police decided to stop protecting that small conservative group that got separated & antifa went after them. Man holding flag got a bunch of stuff thrown on his head. Not sure why @PortlandPolice left. Mob is following them. pic.twitter.com/bTlAUsUpbr

No police in sight as antifa mob descends on men. A fight involving weapons breaks out. Video courtesy of @TPostMillennial. #PortlandProtests pic.twitter.com/ddbHB7gwCx

This is just a smattering of the ‘success’ Mayor Wheeler was bragging about.

What, pray tell, would it take to actually declare it a failure — standing by and watching half the city burn?

Hey PartisanPress: Your Buddies At Antifa Just Beat Up A Reporter — Is THAT News?

Trump Is Weighing ANTIFA Terror Status With Portland Protests Looming — Should He Do It?

If Trump Is ‘Instigating Violence’ Who’s Responsible For These 600+ Anti-Trump Attacks And Threats?