This meme is circulating again in the attempt to convince us Obama was Mr. Wonderful.  Well, not to the clear-eyed, the sober and the experienced observer, rebuttals below, with documentation. 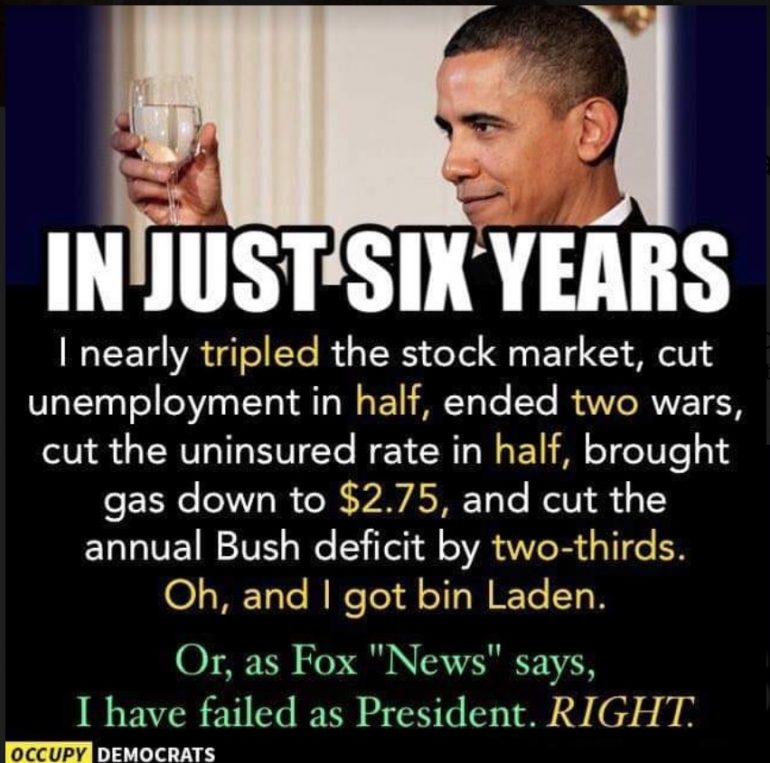 THE STOCK MARKET TRIPLED UNDER OBAMA

Can anyone logically credit Obama for the stock market turnaround after the Great Recession?  Read this for a more in depth analysis.

OBAMA CUT UNEMPLOYMENT IN HALF

We are still at war in Afghanistan.  Iraq required Obama to send troops again after pulling out prematurely in 2011.  He gave ISIS and the Iranians opportunity thanks to that pull out. The Iranians now control Iraq essentially.  What wars did he end? In fact, when Obama left office we were more enmeshed than ever, following years of failure.

OBAMA CUT THE UNINSURED RATE IN HALF

Shortly after leaving office Obama proclaimed the uninsured rate was cut in half. Not exactly.   He claimed he had brought the rate down to 8.8%, others said no. But since 2016, the uninsured rate has increased.  In the 4th quarter of 2018, it was reported at 13.7%.  Could it be that ObamaCare’s huge cost increases and curtailed coverage  as well as the inability to choose one’s doctor contributed to uninsured population growth?  People have not swarmed to enroll nor can enrollees stay on.  Indeed, many have concluded ObamaCare was specifically designed to fail so that the failure could be used as a launch pad for nationalized healthcare along with the complete eradication of private insurance options.

OBAMA BROUGHT GAS PRICES DOWN TO $2.75

No President has much influence on gas prices, unless he makes it expensive by increasing taxes gasoline, or he makes production more expensive via regulations, or he calls the Saudis up asking for more production in order to lower prices.  Who did that?

It is more accurate to say President Bush and SEAL Team Six took out Osama bin Laden.    I think Obama deserves some credit of course, but his decision was a no brainer, not some great act of presidential heroism.    I also think Obama would have preferred offering Osama amnesty and then helping him get a job at the University of  Chicago teaching comparative religion.   Otherwise, Obama’s grandstanding was counter productive:

THE OUTSTANDING FEATURES OF THE OBAMA ADMINISTRATION WERE CORRUPTION AND FAILURE.  WE ARE SOON TO LEARN MORE ABOUT HOW THE ADMINISTRATION SPIED ON AMERICAN CITIZENS IN AN ATTEMPT TO DERAIL A PRESIDENTIAL CANDIDATE, AND HOW THAT LAWLESSNESS CONTINUED THROUGH THE ELECTION AND EARLY MONTHS OF THE TRUMP ADMINISTRATION, EVEN TO THIS DAY.