This is the sort of thing they keep telling us doesn’t exist. It’s a two-fer — featuring Tech bias AND news bias.

Big Tech has made their decision to behave as Publishers rather than Platforms… and it’s long past time for them to be stripped of the special legal protections extended to platforms to shield them in their neutrality.

There is NOTHING neutral about the platforms or the algorithms that drive them.

If you doubt that statement, we have proof. (Yes… again.)

Those biases are why we’ve spread out our social media presence: we’ve got a presence on MeWe, and an outpost with ClashBriefing smack in the middle of Zuckerberg’s hostile territory.

Hat tip to Tim Pool for bringing attention to this report.

The days following two tragic mass shootings in Dayton, OH and El Paso, TX were extremely active for newsrooms nationwide. But readers who used Google to learn about the shootings may have seen an overwhelming majority of news from left-leaning media sources — CNN, the New York Times and the Washington Post in particular — rather than a mix of news sources from the left, center, and right, according to a new audit by AllSides.

The audit was reviewed by a multipartisan team of individuals from the left and right. AllSides uses a multi-partisan, balanced, patented system for measuring bias.

AllSides assessed 522 news articles that were featured as one of the top three results in Google’s “Top Stories” section for 10 shooting-related queries over three days. 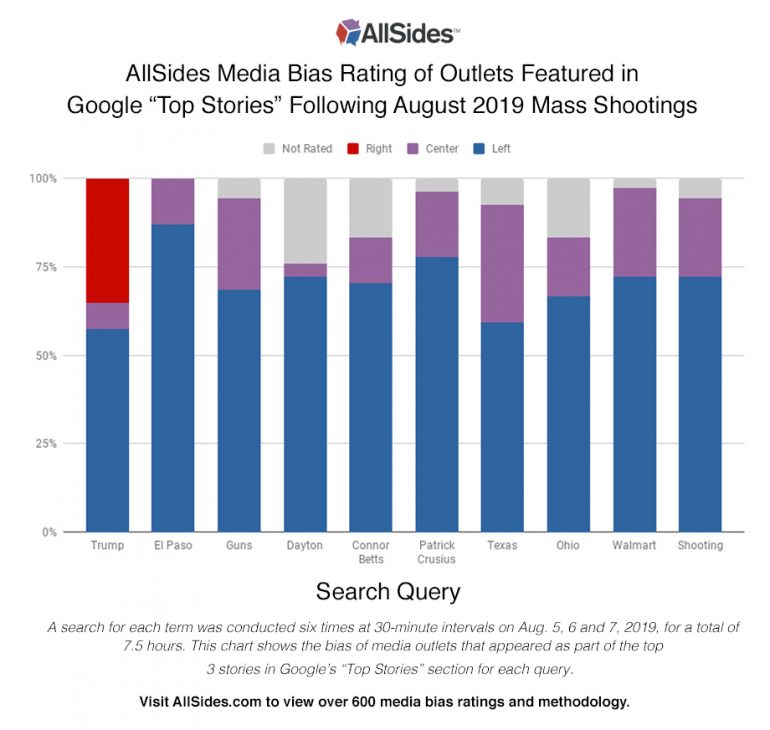 Remember that story about Google actively trying to swing elections? This is the sort of crap they pull to do it.

Here are a few of the Tech Tyranny stories we’ve covered: