With the waves of violence and criminal actions traced back to this group, some of us wonder why this hasn’t happened already.

The only real scandal behind the ‘good people on both sides’ narrative (since Trump explicitly denounced violent protesters on both ends of the political spectrum that day) is the Left’s ongoing tacit support of Antifa ‘protesters’.

Forget the riots they’ve caused, the bricks and urine they’ve hurled into crowds, the heads cracked with bike locks and skateboards, the improvised grenades made out of firecrackers and wine bottles and the physical assault on journalists.

Forget the doxxing and intimidation tactics. The left doesn’t even blink at that.

This ‘protest group’ has called themselves ‘anti-nazi’. That’s enough for CNN and some of the 2020 Democratic wannabes, too.

Now that journalists are getting hospitalized, and we’ve seen an attempted bombing of an ICE center and the Dayton shooter by Antifa members or sympathizers, you’d think the tide of public opinion would fully turn against them on both sides of the aisle. At this point, it has not.

And this weekend, Portland has another ‘protest’ planned.

With the city under the microscope, there’s pressure on the Portland Mayor not to drop the ball (again) by letting these blackshirts run riot in his city.

Like anything else on social media, we have to take it with a grain of salt, but there are rumors that Antifa has a few nasty surprises planned to try and score a propaganda win: 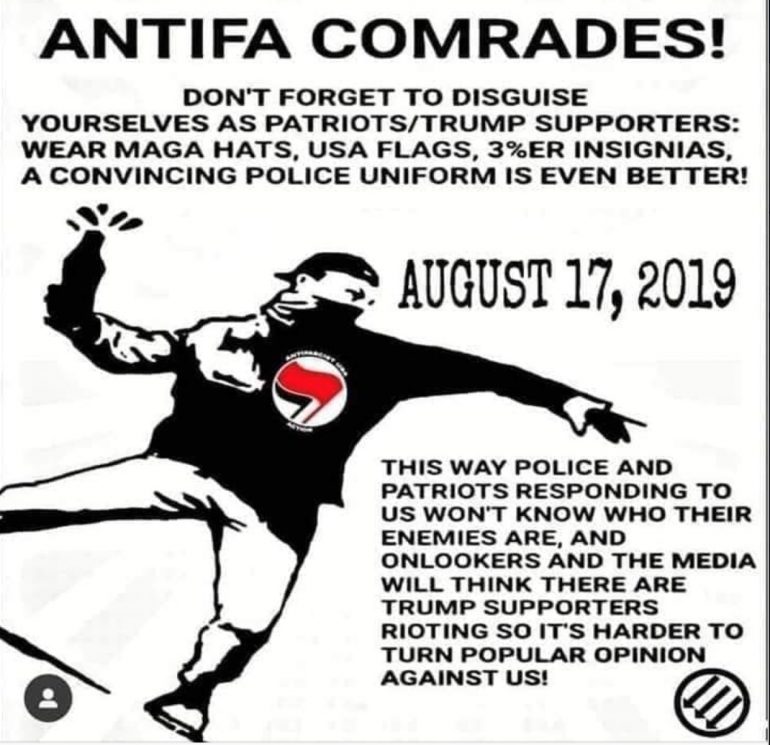 If so, things could get ugly, especially if the media gleefully tells a story about police or Maga supporters doing the sorts of things that the Blackshirts have become known for.

Major consideration is being given to naming ANTIFA an “ORGANIZATION OF TERROR.” Portland is being watched very closely. Hopefully the Mayor will be able to properly do his job!

That might be not just the right course of action, but one that is long overdue.

Few things have been poisoning political discourse more than the group that calls everyone they disagree with a ‘nazi’ while promoting the supposedly righteous cause of ‘punching nazis’.

Should Trump classify ANTIFA as Terrorists?

Hey PartisanPress: Your Buddies At Antifa Just Beat Up A Reporter — Is THAT News?

Here’s 5 Reasons Antifa Should Be Classified As Terrorist Group

Did Anyone Else Notice The Contrast Between How Smollett Hoax and The Antifa Terrorist Attack Were Covered?

Hey CNN: Your Antifa Buddies Are Planning Violent Uprisings — Is That News?

ANTIFA Thug To 9/11 Widow, ‘Your Husband Should F*CKING ROT In The Grave’ – Let’s Make This Punk FAMOUS