Obviously, THIS was not the week that he had custody of the shared Cuomo brain. The poor bastard, that’s gonna cost him.

In a public space, someone ‘confronted’ Chris Cuomo by calling him ‘Fredo’, which (even Cuomo was able to recognize) was a reference to the Godfather. That character was the weaker, less intelligent son with little power or status and some serious character flaws.

To be compared to Fredo is NOT a compliment.

And Cuomo knew it.

After being taunted with the name ‘Fredo’ in public (he was out with his wife and kid) he got right up in the face of the ‘offender’ and started running his mouth, cursing, and uttering threats.

Naturally, since it’s 2019, that confrontation was caught on video.

What were his options? A loudmouth shouted ‘Fredo’ at him. Big deal. He could have ignored him and not given him the time of day.

He didn’t do that.

He could have come up to him and said, “I’m here with my wife and kid. If you won’t respect me, at least respect them.

He didn’t do that either.

Instead, he unloaded on the guy and looked like he was trying to provoke a fistfight, threatening to throw the other guy ‘down these stairs’. He also made it clear he didn’t want to take the first swing and be open to a lawsuit.

The video made the rounds, even the President retweeted it:

He REALLY didn’t like being called Fredo. Maybe it touches a nerve. 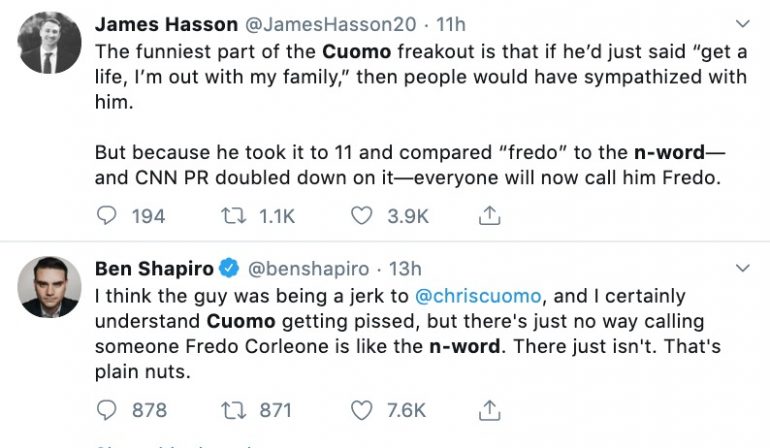 It’s hardly the first time he’s made a stupid comparison like that. You’d think he’d learn. But then, he’s a Cuomo. We mentioned the shared brain already, right?

CNN rushed to his defense… naturally.

But it was too late. He’s already a laughingstock.

Besides, he laughed and called himself Fredo back in 2010 on Curtis Sliwa’s AM 970 radio show. Sliwa had dubbed the Cuomo family “La Cuomo Nostra” as rumors were swirling about Chris’s brother, Andrew, seeking the Democratic nomination for New York Governor.

Maybe we’d feel differently if CNN had actually said something all those times that Republicans were harassed or even attacked in public spaces — or sometimes even their homes.

If they had offered pushback when public figures were chased out of restaurants, with their families, or been harassed while trying to watch a movie, or when protesters made Tucker’s wife lock herself in a pantry while fearing for her safety, maybe we’d be slightly more sympathetic to him.

But these are the same guys who gave oxygen and legitimacy to ‘Antifa’, not even acknowledging their assault on Andy Ngo.

Chris bought the ticket, he helped create this supercharged political environment —  let him enjoy the ride.

There’s a problem with his claim of ‘n-word’. Not only has he used that wounded bird routine before…

Interesting approach by Chris Cuomo. "Everything people call me that I don't like is the N word" pic.twitter.com/CecvCHcdWJ

Fake news is the ‘n-word’ too, remember?

But CNN itself has thrown that very same insult around… on HIS show!

Well, this is awkward…. CNN's @jaketapper referred to @DonaldJTrumpJr as #Fredo in a December 2018 comedy segment. Why didn't @ChrisCuomo storm the set and threaten to throw Tapper down the stairs? pic.twitter.com/T0gJjMxBQO

Thanks to @GonnaBeYuge for this epic piece of photoshopping. 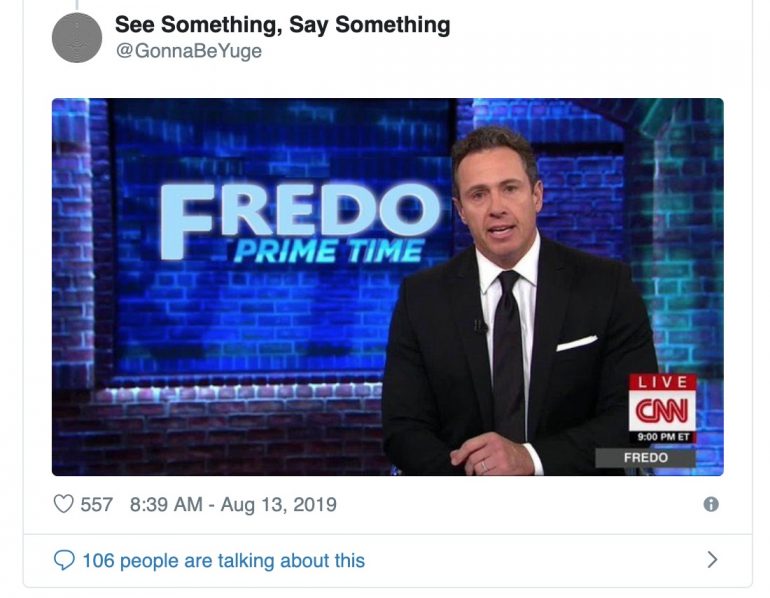 Something tells us that Fredo is his new ‘Forever name’.

If only he had the impulse control that his movie namesake lacked, he might have avoided this whole debacle. Good job EARNING that nickname!