It’s finally released! And exactly NOBODY was expecting a HILLARY reference to show up in the middle of this!

Let’s do a quick recap of what led to the release of this transcript before digging into the contents themselves.

The original ‘whistleblower’ complaint was NOT given with direct firsthand knowledge of the content. That being said, what the complainant DID know about it was based on knowledge accurate enough that the ICIG was willing to treat it as though it were an objection given by a first-hand witness.

The only criminal referrals sent to the Justice Department and the FBI were to determine whether any of the requests President Trump had made to the Ukranian President rose to the threshold of being a Campaign violation.

Having reviewed the case for some time, both agencies ruled that they did NOT rise to the threshold of a criminal violation, and as such, no criminal cases were opened against him. In this regard, the case is closed.

What about Quid Pro Quo?

Among the allegations being made against Trump was that he was holding the Ukranian President’s feet to the fire by witholding military funding aid from him as leverage to force the Ukrainian government to take a particular action against Trump’s political rival, Biden.

The claim that there was a ‘quid pro quo’ as well as ‘collusion’ between Trump and a foreign power to influence an election were some of the driving impetus for the clamoring howls for ‘Impeachment Now!’

What did the transcripts REALLY Say?

The opened with typical Trumpian pleasantries and mutual complements, and congratulations on Zelensky’s recent political victory, as well as some ‘drain the swamp’ chat that will become more relevant later on.

The first meaningful topic they covered was the American support of Ukraine contrasted by the failure of their European neighbors to step up and do the same, with some harsh criticism of how useless Angela Merkel and Macron have been by comparison… including how the United States is doing more to enforce sanctions against Russia than their European counterparts.

This topic closes with Zelensky’s thanks for America’s great support in the area of defense, and indicates a future intention of buying more Javelins (shoulder-fired anti-tank missile) from the US.

[To this point, we have heard nothing that sounds our POTUS is putting the ‘squeeze’ on Zelensky, by way of withholding military aid or otherwise.]

This brings us to Pages 3 and 4 of the transcript is the portion which will be of particular interest to the Impeachment-happy Democrats, as well as anyone wishing to address or refute their allegations.

For those who may have forgotten, Crowdstrike is the ‘third party’ internet security company that made the claim that the breach in Hillary’s security was Russian in origin, a company whose political connections has come under some scrutiny before now.

Rather than using ‘President’ in both portions of our transcript, we will differentiate by using POTUS and ‘VZ’ to demark who is speaking in each section.

POTUS: I would like you to do us a favor though because our country is been through a lot and Ukraine knows a lot about it. I would like you to find out what happened with this whole situation with Ukraine, they say Crowdstrike… that appears to be a reference to the hacking of the Clinton emails in 2016. I guess you have one of your wealthy people… the server, they say Ukraine has it. There are a lot of things that went on, the whole situation. I think you’re surrounding yourself with some of the same people. I would like to have the Attorney General call you or your people and I would like for you to get to the bottom of it. As you saw yesterday, that whole nonsense ended with a very poor performance by a man named Robert Mueller, an incompetent performance, but they say a lot of it started with Ukraine. Whatever you can do, it’s very important that you do it if that’s possible.

VZ: Yes it is very important for me and everything that you just mentioned earlier. For me as a President, it is very important and we are open for any future cooperation. We are ready to open a new page of cooperation in relations between the United States and Ukraine. For that purpose, I just recalled our ambassador from United States and he will be replaced by a very competent and very experienced ambassador who will work hard on making sure that our two nations are getting closer. I would also like and hope to see him having your trust and your confidence and have personal relations with you so we can cooperate even more so. I will personally tell you that one of my assistants spoke with Mr. Giuliani just recently and we are oping very much that Mr. Giuliani will be able to travel to Ukraine and we will meet once he comes to Ukraine. I just wanted to assure you once again that you have nobody but friends around us. I will make sure that I surround myself with the best and most experienced people. I also wanted to tell you that we are friends. We are great friends and you Mr. President have friends in our country so we can continue our strategic partnership. I also plan to surround myself with great people and in addition to that investigation, I guarantee as the President of Ukraine that all the investigations will be done openly and candidly. That I can assure you.

POTUS: Good, because I heard you had a prosecutor who was very good and he was shut down and that’s really unfair. A lot of people are talking about that, the way they shut your very good prosecutor down and you had some very bad people involved. Mr. Giuliani is a highly respected man. He was the mayor of New York City, a great mayor, and I would like him to call you. I will ask him to call you along with the Attorney General. Rudy very much knows what’s happening and he is a very capable guy. If you could speak to him that would be great. The former ambassador from the United States, the woman, was bad news and the people she was dealing with in the Ukraine were bad news so I just want to let you know that. The other thing, There’s a lot of talk about Biden’s son, that Biden stopped the prosecution and a lot of people want to find out about that so Biden went around bragging that he stopped the prosecution so if you can look into it… It sounds horrible to me.

VZ: I wanted to tell you about the prosecutor. First of all I understand and I’m knowledgeable about the situation. Since we have won the absolute majority in person, my candidate, who will be approved by the parliament and will start as a new prosecutor in September. He or she will look into the situation, specifically to the company that you mentioned in this issue. The issue of the investigation of the case is actually the issue of making sure to restore the honesty so we will take care of that and will work on the investigation of the case. On top of that, I would kindly ask you if you have any additional information that you can provide to us, it would be very helpful for the investigation to make sure that we administer justice in our country with regard to the Ambassador to the United States from Ukraine as far as I recall her name was Ivanovich. It was great that you were the first one who told me that she was a bad ambassador because I agree with you 100%. He attitude towards me was far from the best as she admired the previous President and she was on his side. She would not accept me as a new President well enough.

You will be hard-pressed to find any explicit demands made, any proverbial carrots or sticks being invoked. No obvious quid-pro-quo is indicated.

You will not find ‘8 references’ to Biden, as reported. You will not see anything about opening an investigation. Only that both sides indicated interest in clarity, transparency, and ‘draining the swamp’. Both were interested in knowing what, wrongdoing, if any, had occurred, and Trump said nothing explicit about prejudging any particular outcome.

Here are photos of the full transcript: 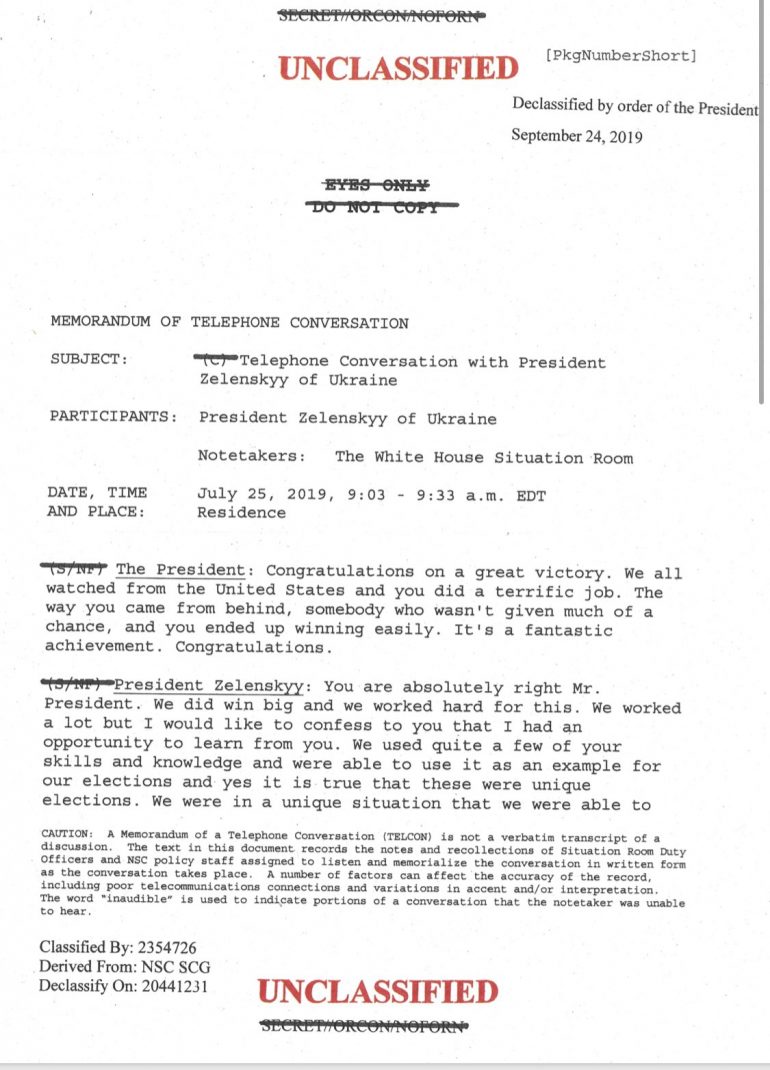 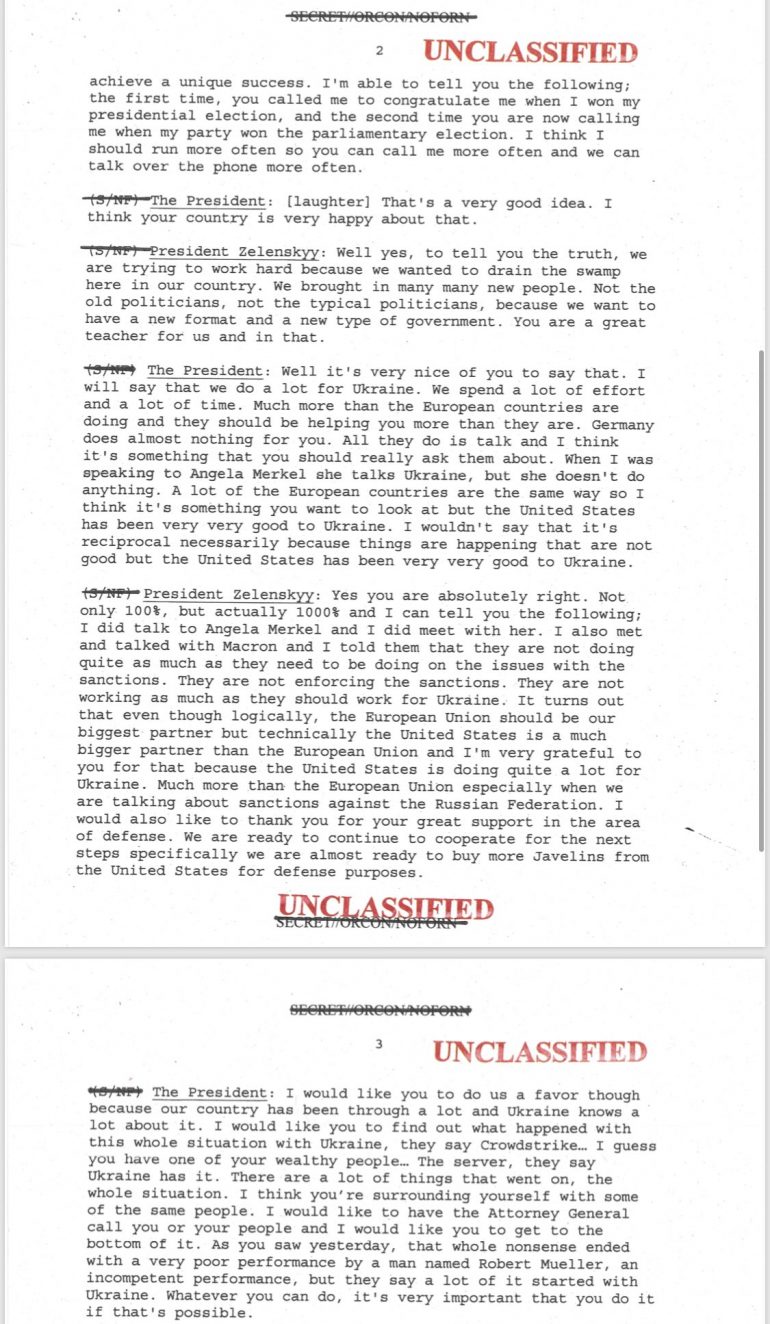 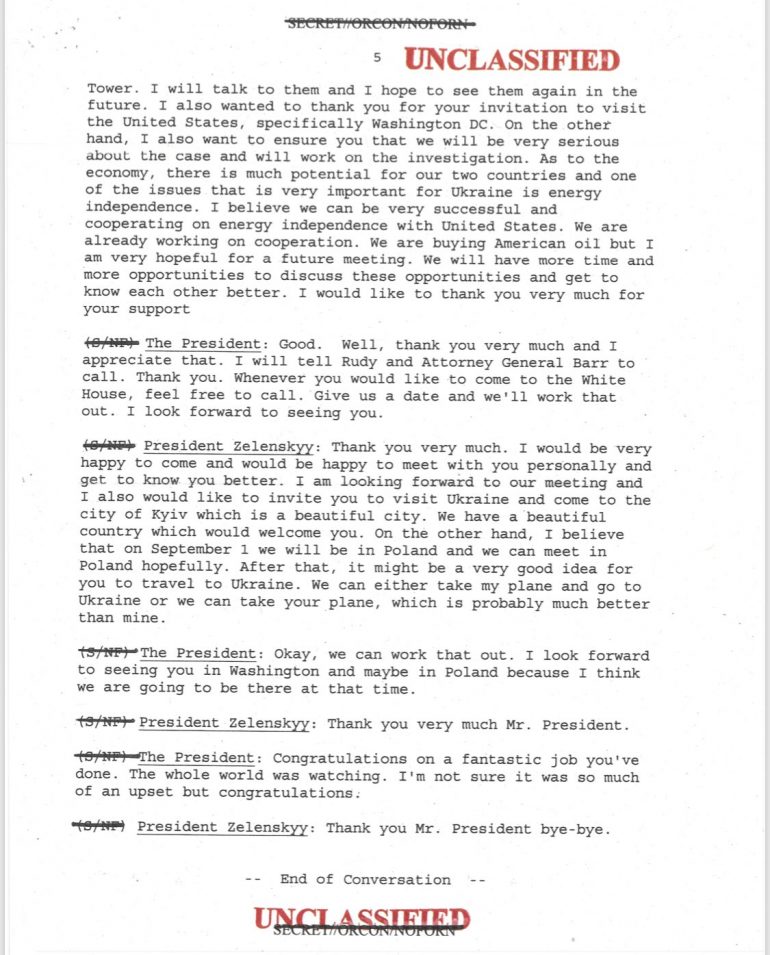