We have the full five pages of the whistleblower complaint, below. And as we write this, Joseph Maguire, the Acting Director of National Intelligence is being trotted out for yet another Democrat-run circus.

The contrast in the opening remarks between ‘Shifty’ Rep. Adam Schiff and Rep Devon Nunes could not possibly have been more glaring.

Here’s what social media found wrong with it (it basically mirrors our own gobsmacked reaction):

If the Ukraine Call Transcript was so damning, why did Adam Schiff have to retell his own dramatic version of it complete with made up quotes? pic.twitter.com/DPocgix6w3

If the progress of this gong show so far is any indication, we can expect more like it, not just from Shifty Schiff & Co, but with the Media(D) as well.

CNN and NPR lied about transcripthttps://t.co/SdVHHFvODB

Compare that to Nunes:

After being sworn in (and, incidentally, sitting quietly through a snide swipe against his reputation and motives from Schiff) he proceeded to set the record straight, and clarify misinformation that had been broadly circulated among the media.

We will summarize his key points below:

– I’m not partisan and not political
– served under 8 presidents while in uniform & took the oath to the Constitution 11 times. That oath is sacred, it is the foundation of our Constitution.
– “Throughout my career, I have served and led through turbulent times. I have governed every action by three criteria: It must be legal; It must be moral; and it must be ethical.
– “In my nearly four decades of public service, my integrity has never been questioned until now.”
– I want to state my support for the whistleblower, and the rights and the laws. (gives history of whistleblowing and rationale for it.)

The particulars of the case itself:

“On August 26th, IG forwarded the complaint to [Maguire] from an employee in the Intelligence Community. The IG stated that the complaint raised an ‘urgent concern’ — a legally-defined term under the whistleblower protection act that has been discussed at length…”

Before discussing the ‘urgent concern’ aspect, there is another, more fundamental issue. It was noticed that many allegations of the complaint were based on a conversation between the President and another foreign leader. “Such calls are typically subject to executive privilege.”

After consulting with WH Council’s office, they were told that Executive Privilege did, in fact, extend to those conversations. Such privilege is not the DNI Director’s to waive.

Once the President released transcipts of the call (September 25th) and thereby removed the Privilege conflict, the DNI was enabled to disclose the details of the complaint and the IG’s letter. Relevant committees have now received the full, unredacted versions of both.

Matters of ‘URGENT CONCERN’: Statutorially defined as being required to meet two criteria in addition to relating to classified material — “Assert a flagrant, serious problem, abuse, or a violation of law AND relate to the funding, administration or operation of an intelligence activity within the responsibility of the Director of National Intelligence”.

“However, this complaint concerns conduct by someone OUTSIDE the intelligence community, unrelated to funding, administration, or operation of an intelligence activity under MY supervision. Because the allegation of [unintelligible] did not appear to fall on the statutory framework, my office consulted with the United States DOJ office of legal counsel and we included the IG in those conversations.”

The DOJ ruled it did NOT therefore meet legal criteria of ‘urgent concern’ they were not obligated to share within that seven-day window.

Here is what was said about the complaint on Laura Ingram’s show before it had been officially released to the general public.

“I encourage you all to read it,” Stewart tweeted. The complaint was not immediately available to the public, but was expected to be released Thursday morning.

“It’s been declassified and it’s been released,” Stewart separately told anchor Laura Ingraham. “So it should be available for everyone to go and look at.”

Stewart added that he has personally viewed the complaint, and was initially “anxious” before he took a look — but now is “much more confident than I was this morning that this is going to go nowhere. … there are just no surprises there.”

…The major development came hours before Acting Director of National Intelligence Joseph Maguire was set to testify before Congress on Thursday. Fox News is told there was serious conversation among lawmakers as to how far Maguire could go in an open session at the hearing. One source tells Fox News the administration may have declassified the document so it could be discussed publicly during the hearing.

On Wednesday, Maguire flatly contradicted a report in The Washington Post, and asserted that he never considered resigning over the whistleblower matter or for any other reason.
Source: FoxNews

Link to the official complaint itself HERE. 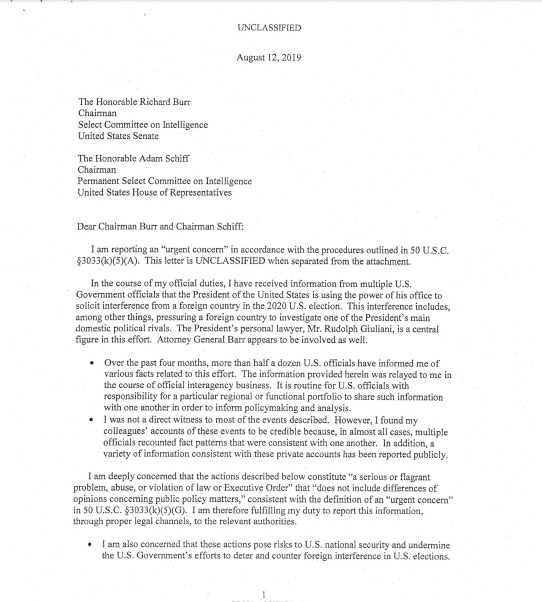 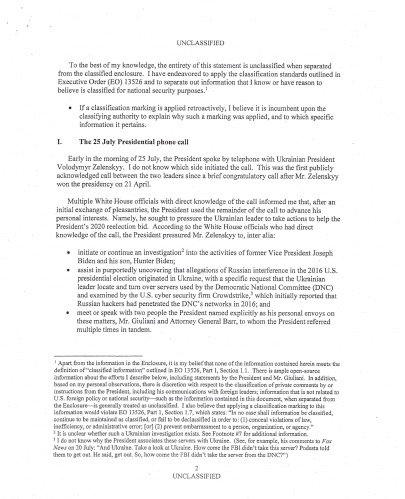 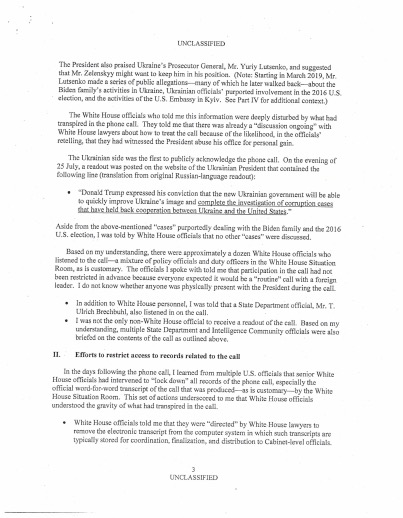 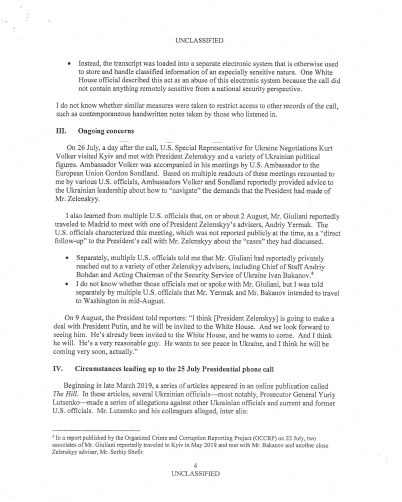 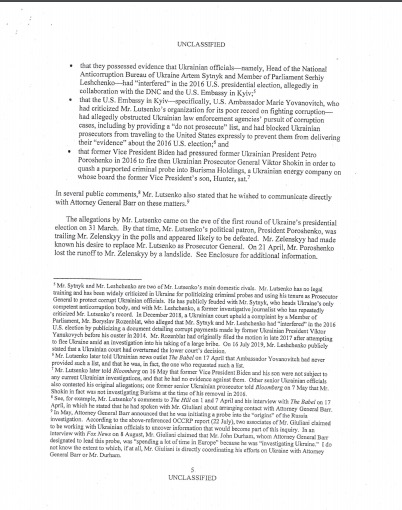 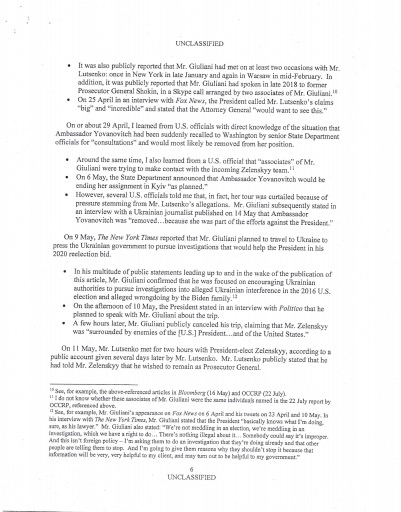 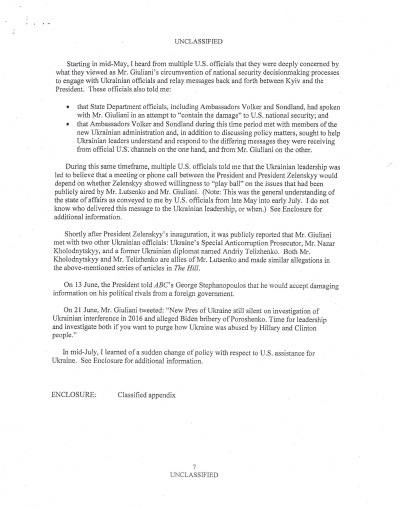 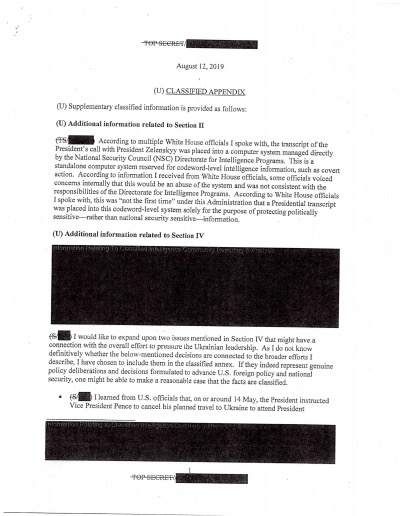 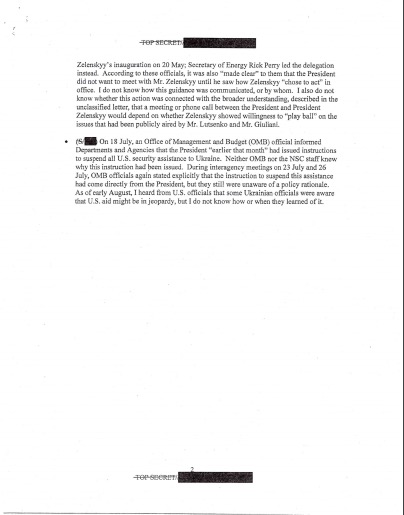