Don’t hold your breath expecting the clowns in the Media(D) to cover this.

Back in May, Senators Bob Menendez(D-NJ), Dick Durbin(D-IL), and Patrick Leahy(D-VT) quietly wrote a joint letter to the Prosecutor General of Ukraine digging around for evidence of Obstruction of Justice in the Robert Mueller investigation, which would be an impeachable offense if the President had committed it. He didn’t as the Mueller Report has revealed.

A Washington Post op-ed columnist, Marc A. Thiessen, wrote in his piece, “Democrats’ double standard on Ukraine” something that seemed to slip past most of us — the fact that three Democrat Senators were attempting to strong-arm cooperation from the Prosecutor General of Ukraine by threatening to withhold U.S. assistance in their #Resist effort.

All’s fair in #NotMyPresident, after all.

It got almost no attention, but in May, CNN reported that Sens. Robert Menendez (D-N.J.), Richard J. Durbin (D-Ill.) and Patrick J. Leahy (D-Vt.) wrote a letter to Ukraine’s prosecutor general, Yuriy Lutsenko, expressing concern at the closing of four investigations they said were critical to the Mueller probe. In the letter, they implied that their support for U.S. assistance to Ukraine was at stake. Describing themselves as “strong advocates for a robust and close relationship with Ukraine,” the Democratic senators declared, “We have supported [the] capacity-building process and are disappointed that some in Kyiv appear to have cast aside these [democratic] principles to avoid the ire of President Trump,” before demanding Lutsenko “reverse course and halt any efforts to impede cooperation with this important investigation.”

The letter was released on the U.S. Senate website. 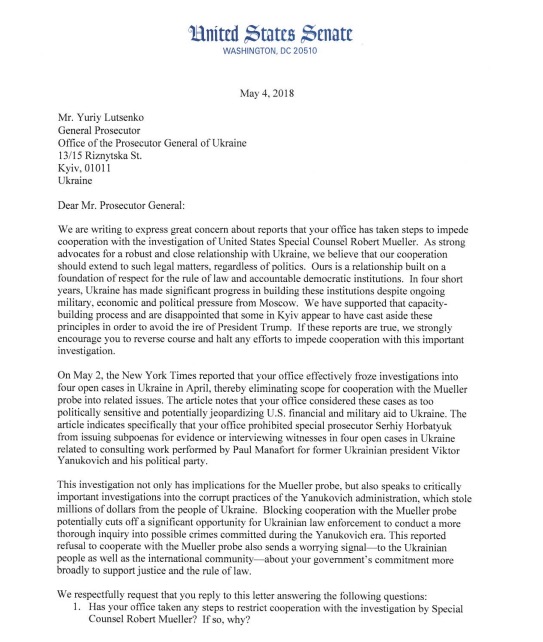 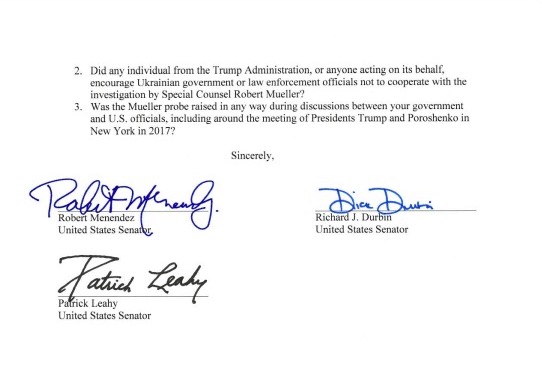 Somehow, it’s still not getting attention now, despite President Trump mentioning it yesterday.

“Chris Murphy literally threatened the president of Ukraine that if he doesn’t do things right they won’t have Democrat support in Congress” pic.twitter.com/ayYUo1DKwu

The overt quid pro quo was evidenced in the letter signed by the trio of Senators but was not overt in the transcript of the phone call between President Trump and President Zelensky released by the White House yesterday.

So, do you think that Senators Menendez, Durbin, and Leahy will face any questions about their attempt to bully Ukraine into finding dirt on Trump?

It’ll get about as much scrutiny in the Media(D) as Hillary’s “Ukrainian collusion” to dig up dirt on Paul Manafort and interfere in a U.S. election.