If he weren’t a champion of ‘cancel culture’ and wrapping himself in identitarian politics, maybe we’d all accept an apology move on. But his hypocrisy is too amazing.

Photos have surfaced about Canada’s Prime Minister Justin Trudeau (son of another Prime Minister, Pierre Elliot Trudeau) dressed up as a character from ‘Aladin’ wearing Blackface (Brownface?) with his face and hands colored while wearing a turban and other similar garb. 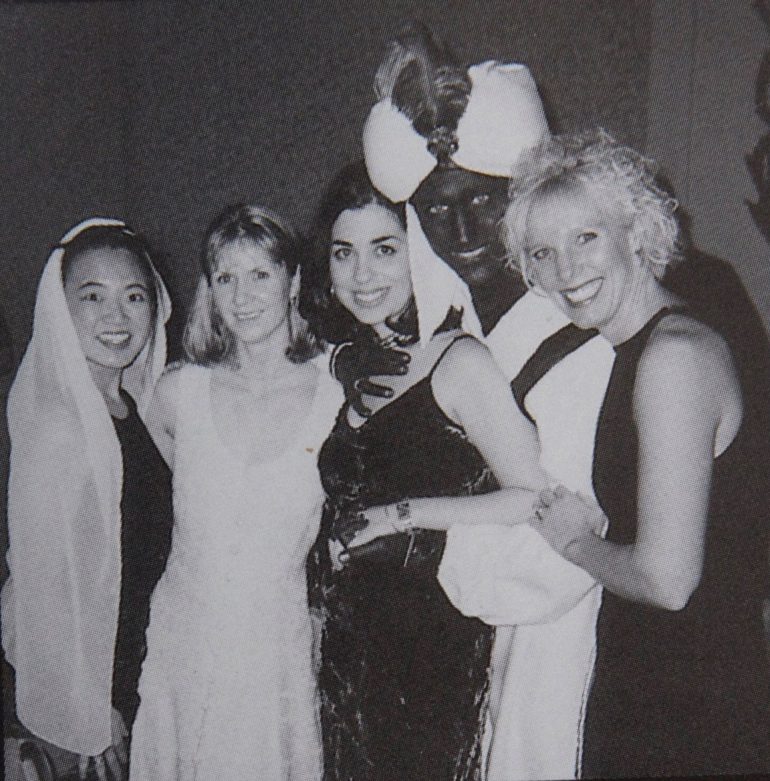 It absolutely blew up on social media.

In the photo, he is dressed up in character and standing among several young women. (Notice the placement of his hand in that photo.) Those women are his students. He was 29 years old and a teacher at the time.

Why does this matter today?

Besides being the liberal darling of the media, he is also in the middle of a national election with the vote roughly a month away.

Time ran a story about the photo…

… in which they reported:

Justin Trudeau, Canada’s prime minister, wore brownface makeup to a party at the private school where he was teaching in the spring of 2001. TIME has obtained a photograph of the incident.

The photograph has not been previously reported. The picture was taken at an “Arabian Nights”-themed gala. It shows Trudeau, then the 29-year-old son of the late former Prime Minister Pierre Trudeau, wearing a turban and robes with his face, neck and hands completely darkened. The photograph appears in the 2000-2001 yearbook of West Point Grey Academy, a private day school where Trudeau was a teacher.

Earlier this month, TIME obtained a copy of the yearbook, The View, with the photograph of Trudeau in brownface from Vancouver businessman Michael Adamson, who was part of the West Point Grey Academy community. Adamson was not at the party, which was attended by school faculty, administrators and parents of students. He said that he first saw the photograph in July and felt it should be made public.

It seems like his own advisors had managed to get out ahead of this story and damage control was already underway:

TIME reached out to multiple people who attended West Point Grey’s spring gala in 2001, including three of the four women in the photo with Trudeau. Most were reluctant to talk about it. One former staff member declined to comment, citing loyalty to Trudeau. Others said they did not remember Trudeau at the party. Two people contacted by TIME acknowledged the existence of the picture, which has been the subject of gossip within the West Point Grey community.
Source: Time

This is yet another blow to his cultivated image of being the ‘good guy’, uber-feminist and transparent.

He is still reeling from another story earlier this year in which he has thrown a female attorney general Jody Wilson-Raybould (she’s native, no less) under the campaign bus because she refused to obstruct justice on his behalf. She was refusing to help a company — SNCLavalin — from avoiding criminal corruption charges –including bribing Libyan dictator Muammar Gaddafi’s brutal regime for many years in order to land big contracts.

And more recently, Justin Trudeau has been accused of obstructing the police investigation into those very obstruction allegations.

And the general takeaway by Trudeau’s critics is that he willfully destroyed an altogether honorable woman’s reputation to save his own skin. That puts claims of being ‘feminist’ and ‘multicultural’ on shaky ground. Especially since he loves throwing the word ‘bigot’ around like parade peanuts.

Even his own government found him guilty of four ethics violations in relation to this case… that means he literally broke the law.

Trudeau’s lack of judgment and foresight is lamentable, but the real scandal here is how four ethics violations effectively disappear after the prime minister stammers his way through a 15-minute-long apology press conference on a Wednesday afternoon. Five days before Christmas. While Parliament is out of session for another five-and-a-half weeks.

The ethics commissioner’s report was scathing, but didn’t impose or recommend any penalty, despite the severity of a sitting prime minister breaking federal law.
Source: GlobalNews

Trudeau was accused of groping one of the publication’s reporters, in an editorial that includes a reported apology from Trudeau.

“I’m sorry. If I had known you were reporting for a national paper, I never would have been so forward,” he reportedly said at the time.
Source: TheHill

Trudeau was obviously ready for this photo surfacing (probably since he saw how Northam handled his) and had his apology ready. He didn’t know it was racist at the time, but he does now, yadda yadda yadda… angry and disappointed in himself, will work hard into the future to… you get the idea.

Mea Culpa, now let’s all move on. Oh, and there was that other time I did blackface and sang ‘Day-o’.

But nothing to see here.

He is getting absolutely BARBECUED on social media. 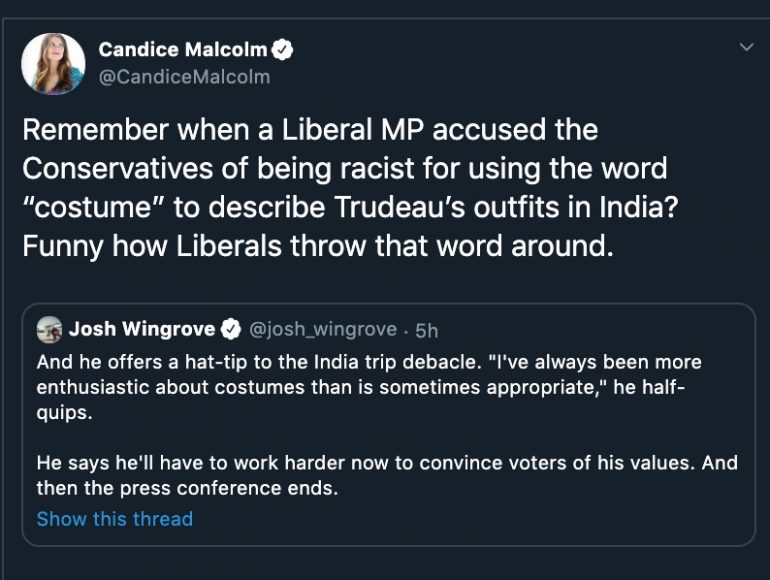 It even warranted a VIDEO by the Rubin Report!

The fact is if this was anyone on the Right it would be a massive scandal and they’d be forced to step down.

Trudeau is progressive media darling thus will get a pass.

Cancel Culture is bad enough but the asymmetry of it can’t stand much longer…pic.twitter.com/u0zMzRrlWH

This could really hurt Trudeau… big-time.

Trudeau may even have to ramp up the slush fund of government money he’s been paying to the press. For only the most honorable of reasons, he can assure you!

The government has announced a series of ‘tax credits and incentives,’ which will cost $600 million over the next five years.

While the dollar amounts of the bailout have been announced, the government says the specifics will be decided after they consult an ‘independent panel.’ Among the expected ideas are a ‘tax credit’ (really cheques being sent to media corporations) for labour costs and content creation, alongside a tax credit for subscribers of digital media sites.
Source: SpencerFernando

Not to worry, at least Big Tech has his back… 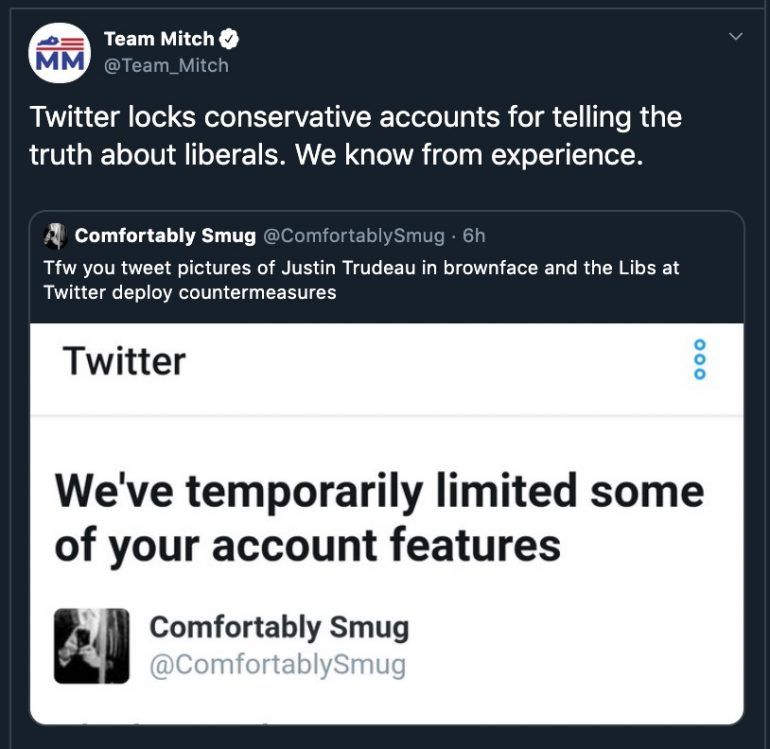 Blackface: Megyn Disgraced For Discussing It, But Late Night Comics And Silverman Are Still Cool?

Dear America: CNN Reported The KKK/Blackface Governor Was A Republican When He’s A Democrat