Rather than go the popular route of assuming police would treat his black son poorly, he noticed his kid was a little nervous and so, got proactive.

In a world so quick to tag police officers as ‘the enemy’ and racial minorities as perpetual victims, this dad, Scott Harrell, showed himself to be truly a man and a great dad.

First, he was out taking his sixteen-year-old son out for a driving lesson in an empty parking lot. He’s hands-on in his role as a dad. In a generation where Millenial kids would rather be online than behind the wheel, that’s an accomplishment in its own right.

But while he was out there, he noticed a police officer happened to pull into the parking lot, and the son, who didn’t have his license yet, and was just practicing in the parking lot, got nervous.

This dad isn’t one to let his kids wallow in fear. He teaches them to face it head-on so that it won’t master you. A great tactic, and one that would serve the generation that brought us ‘safe spaces’ and ‘trigger warnings’ well, if only they would learn it.

So, what did he do with his son’s nervousness about the police officer?

Simple. He had him face his fear. 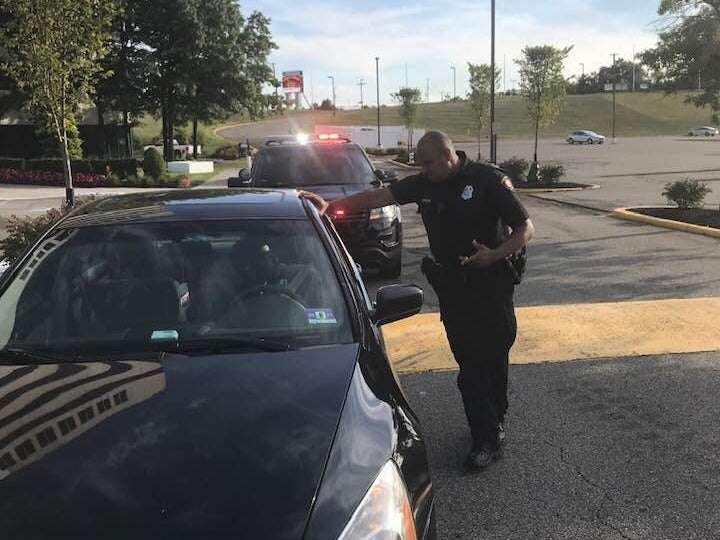 “That’s when we passed a Woodbridge police SUV with two officers sitting inside it,” said Harrell, who is himself a former cop. “My son immediately got very nervous. I asked him what was wrong. He said he didn’t want us to get in trouble, as he’s an unlicensed driver.”

That’s when Harrell decided he had a unique opportunity before him. He asked his son to stop the car, got out, tapped on the police officers’ window and politely asked if they wouldn’t mind doing him a favor: Please pull over his son’s car, with lights and sirens flashing.

“I said, ‘If you’re not too busy, could you pull over my child?’ Of course the officer looked at me real quick and said ‘What do you mean?,'” Harrell laughed, while relaying the story to a Patch reporter. “I replied that I want to take him through the process of a traffic stop, so he knows what to expect and realizes there is nothing to fear. I don’t want him to be scared when he sees you guys out there.”

You see, Harnell himself has once been a cop — before he got injured. He remembered how frightening it felt to get pulled over the first time. He knew how that nervousness could raise a cop’s anxiety level.

So he wanted to strip the mystery and terror out of it for his son.

When the lights came on, he got nervous and jumped the curb in his haste pull over. Dad told him to take a deep breath and calm down. He walked his son through what was happening.

Officer Patel walked over and told the teen he was stopping him because his license plate was partially covered.

“My son started saying ‘I didn’t know, I didn’t know,'” said Harrell. “I told him, ‘Son, calm down. He’s letting you know you need to fix that at a later time.'”

The officer then told him to always be careful who rides in his car, and to be careful about what they bring into the vehicle. Jason asked: “What if I’m driving my friend and he has something he shouldn’t have?” Harrell said. “The officer replied, well, if he was really your friend would he be putting you at risk like that? Because as the driver you are responsible for whatever is in your car.”

Patel then asked Jason where he goes to school (Middlesex County Vo Tech) and they then talked about music. At the end of the interaction, both the cop and the teen were smiling and laughing; they shook hands and the officer walked away.

“This was a teachable moment: Definitely the fact that I and my son are African American came into my thinking,” said Harrell. “There are a lot of people who speak and yell at the problem without realizing we are all human beings. Most police officers, all they want is to do their job and go home at night. My son had the opportunity to interact with a police officer, both of them as human beings, not icons.”
Source: MSN

If we had more dads like him out there, we’d have more college-age men, rather than just boys who can shave.

And hopefully, this experience will help others see the police in a different light.

They’re not the bad guys some folks make them out to be.