Next time they scold us over haw many have died in ICE custody, ask them about THIS statistic.

Leave aside for a moment the millions of dollars a day the cartels are raking in through illegal immigration — and the net harm that will wreak on both sides of the border.

Leave aside for a moment the child trafficking involved in roughly 30% of ‘families’ being faked with ‘rented’ or abducted kids.

Leave aside for a moment the number of women and, yes, even young girls that are sexually assaulted in their attempts to cross the border illegally.

Leaving all those facts aside, the Left would STILL have us believe that their side represents the compassionate response to border-jumpers crossing illegally and playing the asylum card once they are apprehended by authorities.

The two reasons they give are ‘separation of families/children in cages’ & ‘people have died’.

As a reference point, fewer people have died under Trump’s administration than under Obama’s. And even then, there is no reason to believe that deaths under either were a function of neglect or abuse.

Again, courtesy of Notwokieleaks, here’s a PDF of deaths in ICE custody from October 1, 2003 to June 5, 2017. By my count, 67 illegals died (1.39 per month) during the Obama administration, often from conditions like cancer, diabetes, or hypertension. And those preexisting conditions had zero to do with being held by ICE. It might even be possible — likely? — that they received better emergency treatment in ICE custody than they might have gotten in their own countries. People don’t flee here because conditions are worse, after all.

Adding in more recent data found here, a further 26 illegals — slightly less than one per month, on average — have died under detention since Donald Trump was sworn in. I’d remind you that Trump’s slightly lower monthly average is despite the year-long surge in illegal border-crossings, which has gotten so bad that even Democrats have recently been forced to concede that there is indeed a crisis.

But even then, the raw numbers probably make the situation look worse than it actually is. Actual causes of death seem to be largely from preexisting health issues. No one was killed in gas chambers or in tortuous medical experiments or from random beatings, etc. You know, the whole Nazi Concentration Camp Narrative some are trying so desperately to sell you.
Source: PJMedia

An NBC story published in June paints as grim a story as it can, claiming 24 people ‘have died in ICE custody’ during the Trump administration. The PJMedia article, cited above, shows some of the reasons that stat is flawed, besides the fact that this is inflating the number by rolling the number of Two and a Half years into a single stat to make it seem scarier.

But if media reporting about such deaths are shared with the intention of pulling at heartstrings and intended as a justification of a particular (ie, Democrat) immigration policy, can we trust they are telling the whole story? Or are they cherry-picking stats?

Did they happen to mention the supposed ‘asylees’ crossing the border and falling down dead somewhere in the trackless expanse of those areas that fall between lawful entry points? Was any tribute given to THOSE unfortunate souls?

Or would that have broken the Anti-Trump, Anti-ICE narrative they’ve been busily spinning as we all ramp up for 2020?

Scroll quickly past the photo below if you are squeamish about such images, but have you heard news reports about migrants like this poor unnamed individual whose gender could only be guessed at by the clothes on what was left of him after the wild animals had done their worst? 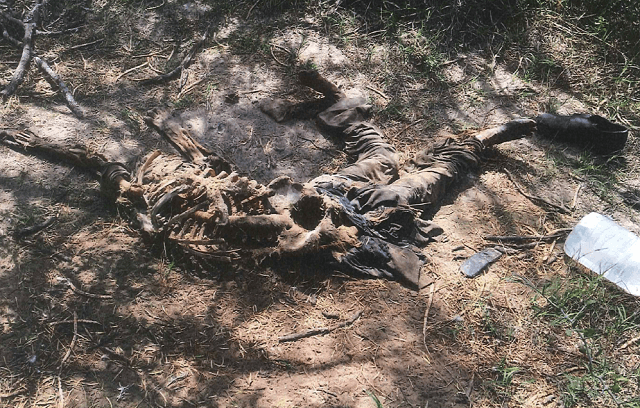 His sad tale is not so rare as one might hope.

A Brooks County Sheriff’s Office deputy faced the gruesome task of recovering the half-eaten remains of a migrant who died on a Texas ranch about 80 miles from the Mexican border. The migrant is the 36th to have lost his life attempting to circumvent the Falfurrias Border Patrol Checkpoint on U.S. Highway 281.

…Callous human smugglers will drop off the migrants on ranches south and southwest of the Falfurrias Border Patrol checkpoint. They give them a limited amount of water and food and send them on a march with a guide that can last for days, Brooks County Sheriff Benny Martinez told Breitbart Texas. “If one of them becomes injured, overheated, ill, or for any other reason can’t keep up, the guide will simply leave them behind to die,” Sheriff Martinez said.
Source: Breitbart

So, we’ve got ‘evil’ ICE having maybe one death a month under their watch, despite people streaming in with any number of possible physical and pre-existing conditions before trying to cross inhospitable terrain, with no mention made of all the rescues made by ICE and Border Agents have made when people recklessly risked the lives of small children and infants in crossing rivers and deserts?

We can compare that to an estimate 300 dead so far this year that, for some reason doesn’t warrant even a squeak out of the media.

It’s almost as though the press is more interested in telling a narrative than telling the truth. That only SOME of these lives are a story they are interested in — or even WILLING — to share with the public.

Any story that makes Trump look like his border policies might be coming from wholesome and just motives rather than corrupt and racist ones just isn’t worth the telling, is it?