Controversy has swirled around Ilhan Omar’s family life for all sorts of reasons for a long time. But new evidence makes us even question her actual NAME.

And the damning evidence being offered against her (just like the evidence in some of her other scandals) was pulled out of her Ilhan’s OWN social media accounts.

Here’s the screencap with the explanation. 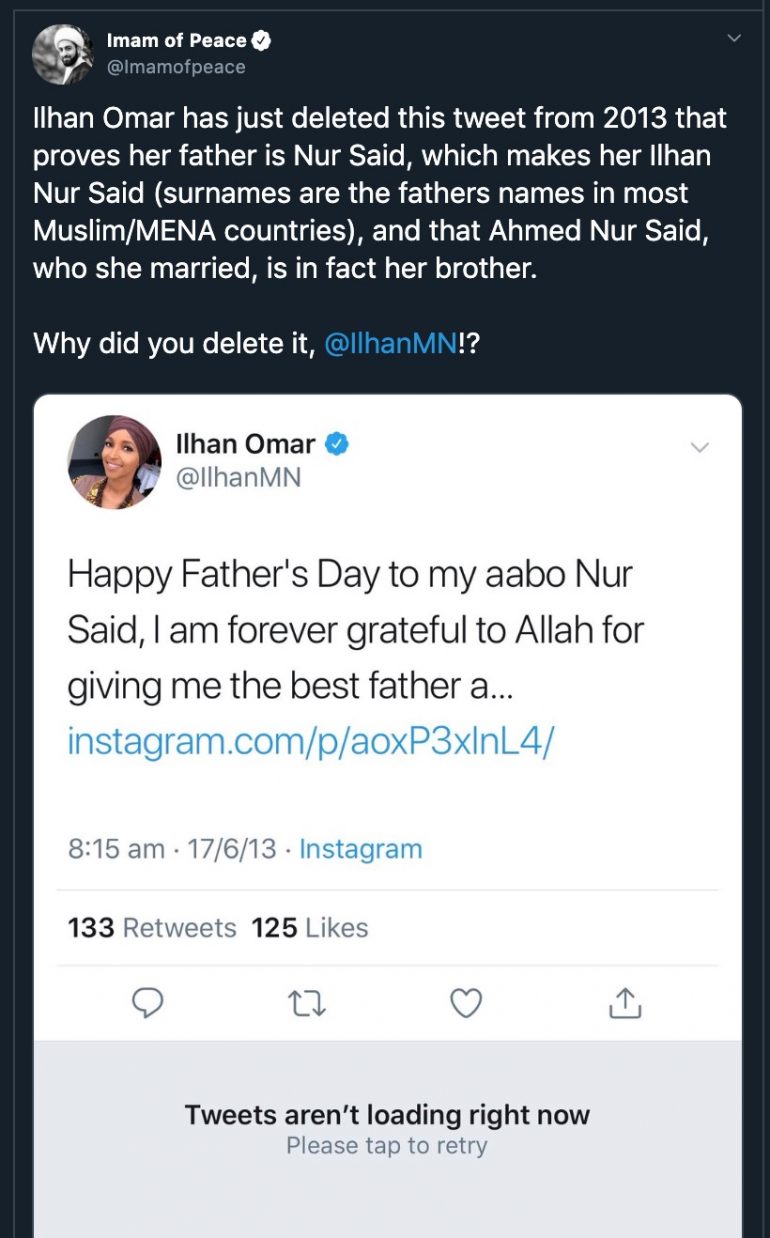 The Imam of Peace is NOT a fan of Ilhan Omar. And obviously, you can’t blame it on Race or Religion, either.

Why does he have a beef with her?

Well, see if you can guess.

Here’s a little about The Imam of Peace — Imam Tawhidi, as taken from the bio in his book and what his priorities are:

Imam Tawhidi describes his journey from a radical Muslim and a disciple of the Iranian government to a reformist Imam. He describes his family’s experiences of resistance and persecution in Iraq, and childhood in Iran then Australia. He tells the stories of his inspiring Hajj pilgrimage, Islamic study tour in Iran, and the other influences on his religious beliefs as a teenager.

Tawhidi then describes his return to Iran to attend university, where he had to contend with overcrowded dormitories, theft, bullying, extremist indoctrination and corrupt teachers. He got to know religious leaders who were loyal to the Iranian regime and those who opposed it, and gradually began to de-radicalise. He describes the persecution he experienced as a result of becoming an opponent of the regime, including interrogation, detention and physical assault by the Iranian intelligence service. He also recounts his work in Iran and Iraq after his studies, including co-founding a television channel that promoted peace and opposed extremism.

After his return to Australia he continued to speak out against Islamic extremism through the Australian media, leading to harassment and physical assault by Australian Islamic leaders.

He’s had a long-standing opposition to her, and there is every indication that it will continue.

Massive developments about to drop regarding Qatar and the gang I’ve been cc’ing and speaking about since June: @QatarEmbassyUSA, @A_AlAthbah, @alanbender1965.

You will soon see the connection to @IlhanMN.

Ilhan, Qatar and Erdogan. The relationship @IlhanMN can never deny. Ever.

He has long been working on putting together evidence that Ilhan Omar has been working at cross-purposes with the Oath of Office she swore to uphold. Working WITH Qatar and against America.

And now it seems Twitter is hard at work keeping him from even Tweeting about it.

Look at what @Twitter is doing. It’s blocking me from tweeting about Ilhan Omar. I have to try 20-30 times for each tweet and log out and in again in order for it to work. ALL OTHER TWEETS WORK PERFECTLY. RETWEET AND EXPOSE! pic.twitter.com/cjIgMXNWfY

It raises the question, what are Twitter’s priorities in this case… and why?